On Tuesday Night, Twitter announced an extensive crackdown on the QAnon movement, in line with its policy to “take strong enforcement action on behavior that has the potential to lead to offline harm.”

The QAnon movement has grown radically over the last four years. It began in obscurity in 2017, when someone known only as Q posted a series of conspiracy theories about Trump on the internet forum 4chan, positing that a deep state satanic cabal of global elites was involved in pedophilia, sex trafficking and supposedly responsible for all the evil in the world; it has since grown into a global movement that has recently seeped into mainstream popular culture and shown up in person at events, harassed people online and off, and spread conspiracies at a rapid pace, aided by celebrities and the President of the United States.

Twitter further stated that it will be suspending accounts found to be tweeting about topics related to QAnon that are engaged in violations of Twitter’s multi-account policy, coordinating abuse around individual victims, or are attempting to evade a previous suspension. In reality, this mostly means that the platform is simply enforcing existing policies on QAnon after seeing an increase in violations of policies by QAnon in recent weeks.

NBC News subsequently reported that approximately 7,000 QAnon accounts have been taken down; Twitter added that the platform will be limiting 150,000 additional accounts by no longer recommending content and accounts associated with QAnon in its trends and recommendations, ensuring that those activities aren’t served up in user searches, and blocking URLs linking to QAnon-associated websites. Twitter stated that these will be “rolled out comprehensively this week,” though QAnon already started blocking QAnon accounts that have the popular Qmap website linked to their profile, as it was a Twitter policy violation.

In addition, we will:

Many observers of the QAnon movement greeted the decision by Twitter with excitement and relief. It was essential, they believe, to eliminate the recommendation algorithm that continuously spread QAnon-driven disinformation and acted as an indoctrination pipeline.

Undoubtedly, this will help curb access to this toxicity on Twitter. QAnon is not simply a few influencers who are spreading disinformation or hate speech. Based on my social media analysis of QAnon activity on Twitter, over the past 30 days there have been approximately 150,000 unique authors posting about QAnon daily. Therefore, the actions that Twitter will take will likely impact almost all of the daily active QAnon community.

At the same time, these are not all faceless drones or bots tweeting QAnon content. As Alex Kaplan from Media Matters has reported, there are currently 66 congressional candidates that have supported or given credence to QAnon, 15 of whom will be on the ballot in November. According to Oliver Darcy at CNN, a Twitter spokesperson told him that “currently (QAnon) candidates and elected officials will not be automatically included in many of these actions broadly.”

However, if they are campaigning on QAnon-related topics or had a QAnon consistency, limiting the reach of QAnon content, hashtags and URLs may have an impact on the electoral process. There will be a delicate balance that Twitter will need to uphold; how that will be done and what the impacts will remain to be seen.

Twitter further stated that they are taking action on behavior that has the “potential to lead to offline harm.” What is unclear at this time is how Twitter will judge what may or may not lead to offline harm. Though there have been QAnon adherents who have been charged with or have allegedly perpetrated murder, arson, uttering terroristic threats, kidnapping and vandalism, there are others who have consumed the same content and not taken any violent action. Paradoxically, if we take a look at Twitter actions from the perspective of a QAnon believer this will confirm their ideological framework, as has been expressed by some QAnon influencers following last night’s news. 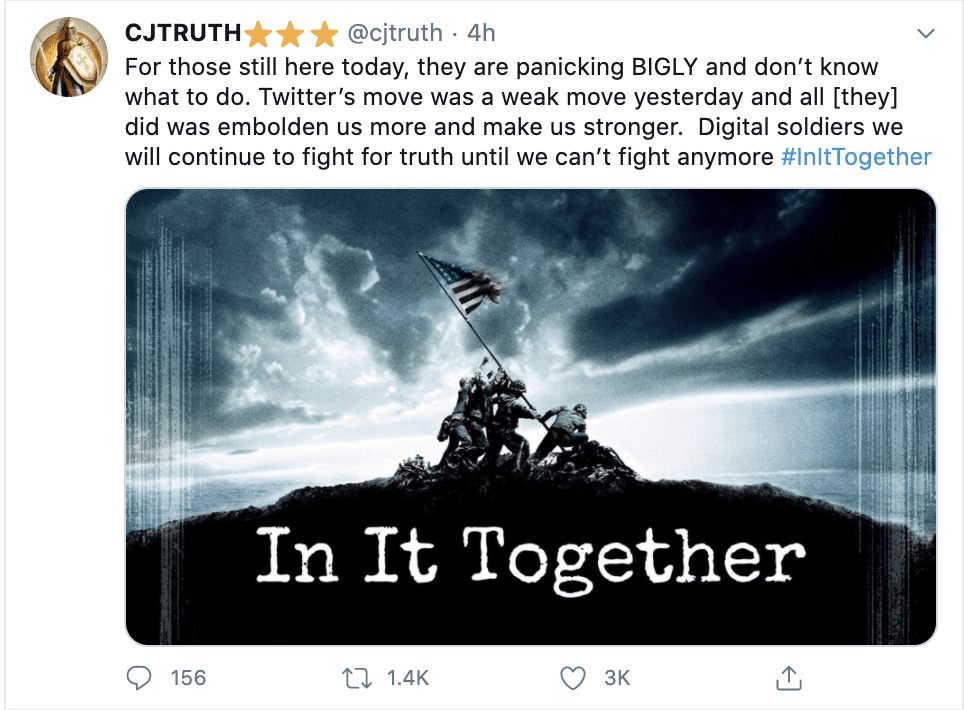 QAnon believes they are fighting an information war against the deep state and that Twitter is where the war is happening. If they are being beaten in the information war, is that something they will continue to fight? Will they redouble their efforts on other platforms? Or will they find another outlet? Initial reactions from the community highlight some of the challenges of combatting a movement like QAnon, whose members believe that this is simply a tactic used by their enemies in the war they are already fighting.

Some users have already started pronouncing digital martyr narratives for the social media accounts that have fallen in the “digital war,” while at the same time stating that this is what QAnon adherents have been trained for and it is “mission forward.” Others simply turned to prayer, asking the Good Lord to help and protect QAnon soldiers from being de-platformed in this information war. And then there are threats of class-action lawsuits from Q members who have no interest in leaving Twitter.

Deplatforming will not change the ideological beliefs nor the human behavior of QAnon adherents, rather it will likely reinforce them. If you take the digital soldiers off their digital battleground, most may choose to fight from another platform, but potentially for a small minority of disenfranchised QAnon believers, offline action may appear to be their only solution.

It is a good approach from the platform’s perspective, and many may see this as a positive thing (and it may well be in the short term). Thinking of the long-term impact is where it gets tricky, especially from a societal perspective. Deplatforming can work on an individual level, as was the case with Milo Yiannopoulos who lost his source of income and his toxic platform. However, QAnon is not an individual, not only is it membership global and decentralized, it is a movement that has found a voice in the halls of power. It is a movement that Trump has amplified over 185 times, Michael Flynn (Trump’s first national security adviser) participating in the QAnon TakeTheOath trend. Additionally, some in QAnon formalized religious practices and formed a church.

Twitter is also not the only platform in the game.

If QAnon influencer and content creators are banned, the movement will simply move to another platform. If Facebook does not follow in the footsteps of Twitter, they are a likely home for QAnon along with the new conservative-focused network Parler. There is also a small number of QAnon accounts sharing their profiles on Wego.Social, congressional candidate Darlene Swaffar being one of them.

Though many QAnon influencers and adherents have expressed they will be moving to Parler, the platform functions differently than Twitter; there is no trending topics to react to and the timeline is quite restrictive with regard to exploring new content compared to Twitter. Parler is very much echo chamber based and it will lack the community feel that many QAnon adherents need, it will also lack the opposition QAnon found on Twitter, which is essential to feeding the movement. In the long term, there is a chance Parler could not sustain QAnon.

Another option for QAnon would be a large migration to Telegram, where there is no content moderation, and there is an existing and thriving transnational QAnon community that already tops 100,000 members. Telegram chats can provide the interaction the community needs. Furthermore, Influencers can have their own channels which may sustain a large following like on Twitter.

Telegram is also a haven for more extreme groups such as anti-government, neo-Nazi, and white power movements. With so many birds of a feather flocking together, the chance of some QAnon followers cross-pollinating with hardened extremists is a concern.

With such a diverse and active community the only option for QAnon will be migration. Where they end up in the digital ecosystem will determine what the possible societal impact may be and how the community will change and evolve.

At this point, I still think it is important to be cautious about the potential outcomes of Twitter’s crackdown and some serious thought and analysis still needs to be put into the potential fallout (both good and bad) this decision will have. 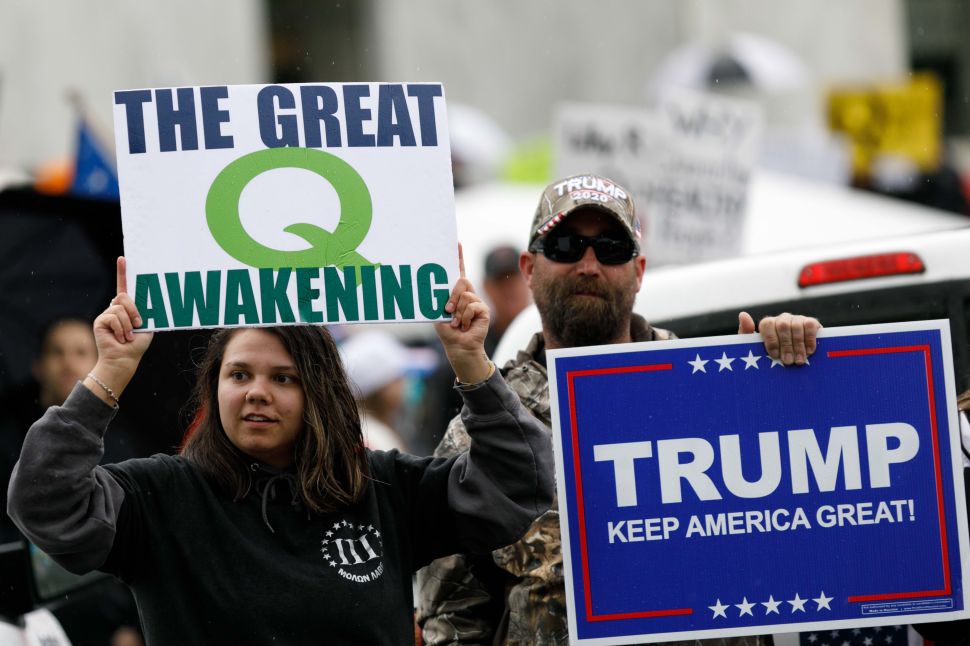