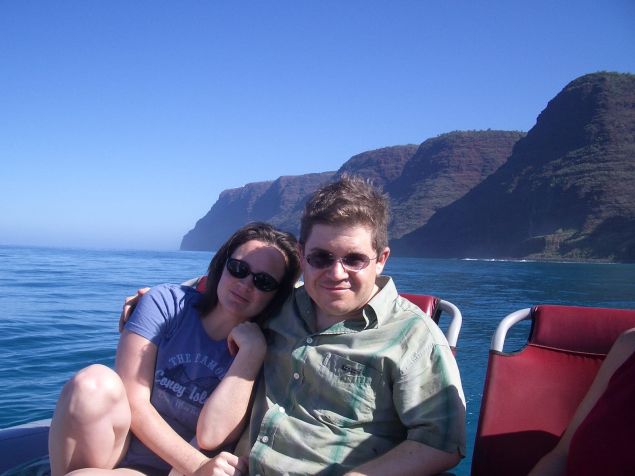 Michelle McNamara and Patton Oswalt in I’ll Be Gone in the Dark. Courtesy HBO

At the end of the fourth episode of HBO’s docuseries I’ll Be Gone in the Dark, comedian Patton Oswalt’s voice is heard frantically talking to a 911 operator. Michelle McNamara, his wife and the author of I’ll Be Gone in the Dark—the bestselling true-crime novel that the six-part TV series is based on—had died in her sleep at the age of 46.

The series explores writer Michelle McNamara’s investigation into the dark world of a violent predator she dubbed the Golden State Killer and who’d also been known as the East Area Rapist. Joseph James DeAngelo, who was finally caught last year, terrorized women and men up and down the California coast during the 1970s and ‘80s, leaving dozens of rape and murder victims in his wake. I’ll Be Gone in the Dark—directed by Oscar nominee and Emmy-winning director Liz Garbus along with Elizabeth Wolff, Myles Kane and Josh Koury—is a riveting inquiry into the macabre preoccupation with true crime and how one woman’s determination to bring this cold case to light ended up costing her life.

The long-awaited capture of DeAngelo made international headlines when it happened. But McNamara—the person writing the definitive book that helped lead to his eventual arrest—and her death is a lesser-known aspect in the dark tale. In tonight’s fifth episode, “Monsters Recede but Never Vanish,” McNamara’s sudden passing is unpacked and explored by her family, friends, colleagues and most heart-wrenchingly by Oswalt himself.

“If you don’t talk about grief it can set up and fortify its position inside of you and begin to immobilize you,” Oswalt says in the episode. “But the more oxygen you give it, [it doesn’t get the chance to do that].”

Episode director and series producer Wolff tells Observer it was an especially cathartic episode to create. The directing and producing team always knew they wanted to build up to McNamara’s death wherein they were going to have to grapple with both the known and unknown aspects of the situation. What is known is that McNamara died in her sleep on April 21, 2016 from a mix of prescription drugs. All indications point to it being accidental. But her long-standing, self-medicating habits are also displayed throughout. “Painkillers equal joy,” she writes in her journal at one point after suffering from postpartum depression. And in 1993, she wrote: “I probably do have a chemical-based depression.” Wolff doesn’t believe that was the writing on the wall for McNamara, but rather that it points to the harmfully casual self-medicated society that she was unwittingly a part of.

SEE ALSO: Jim Gaffigan Tried His Jokes Out Around the World to Make ‘The Pale Tourist’

Looking to unpack this penultimate episode of I’ll Be Gone in the Dark, Observer chatted with Wolff about building suspense in documentary storytelling and how, in this case, the series was designed to build toward McNamara’s death and its aftermath.

Observer: The way the suspense builds in I’ll Be Gone in the Dark—and even ebbs and flows—is like a Hollywood thriller. What were the decisions that went in to create such suspense?
Elizabeth Wolff: From the beginning, we all discussed how we wanted to lead with action instead of expository storytelling. We all come from documentary backgrounds where there is a lot of telling and not a lot of showing. So, we picked our editors and built our team around people who really wanted to show action and drama and figure out ways into scenes that felt more narrative than documentary. Because we had Michelle’s extraordinary literary gifts, we felt that there was a unique opportunity [in] a narrative-doc hybrid—as in, this is a documentary, but we wanted to incorporate narrative devices in our storytelling.

We did two main interviews with Patton, and the one that you see in episode five is his second one. Liz conducted it, and I remember listening in the other room with my headphones with another producer and we were just weeping.

There are quite a few storylines that happen in this show, but the two major dramatic storylines seem to center around McNamara and the Golden State Killer (GSK). What were goals with weaving those together?
When we would be telling the story of the GSK, it would become so intense that we would instinctually break it up, giving the opportunity for the viewers to have a reprieve from the darkness of the GSK story with a little bit of Michelle’s story. As you see, though, it eventually starts to switch. Michelle becomes the darker story, and then in episode five, the genetic genealogy hunt kind of becomes the relief that you get from the darkness of exploring and unpacking Michelle’s death.

The show drops some hints about Michelle’s pill habit in the first four episodes. It was so interesting—and devastating—to have it play this way because her loved ones, even her husband, clearly didn’t recognize the harm it was causing. What were decisions surrounding that storyline?
Michelle’s story was the most interesting part of this series to me from the beginning. I am probably not alone in that—so many of our associate producers and editors were really attracted to this mystery and how Michelle served as a window into us all, both into our cultural fascination with true crime and as a creative. I saw her story as the portrait of an artist as a young mom trying to find her voice and learn the craft of writing. I really identified with that struggle. So, when he got to this point of her death, we were all really waiting for it, in a way. Like this was something that we needed to understand ourselves. We did two main interviews with Patton, and the one that you see in episode five is his second one. Liz conducted it, and I remember listening in the other room with my headphones with another producer and we were just weeping. Because we had become so close with Michelle’s life, hearing Patton talk about her death was devastating. 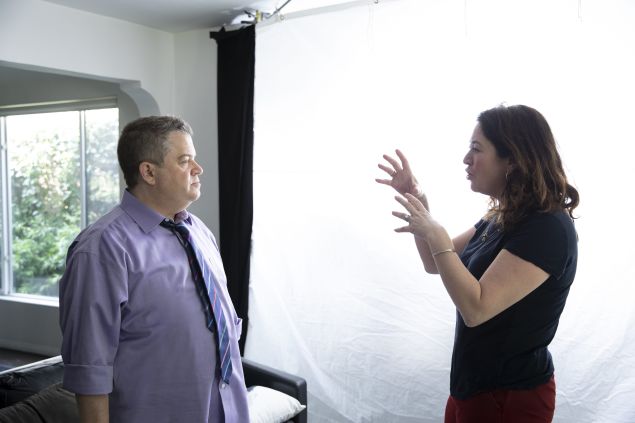 “With the support and guidance of Liz Garbus, who always make sure that we don’t cross a line, I knew that we could use these interviews in a way to reveal truth but not be prescriptive,” episode director Elizabeth Wolff tells Observer. Pictured: Patton Oswalt and Liz Garbus making I’ll Be Gone in the Dark. Courtesy HBO

What interviews did you conduct for that episode?
In February 2019, I flew out to Chicago again to interview her siblings. Those were really hard interviews—in many ways, harder than interviewing the GSK survivors, which were really hard interviews as well. The McNamaras were thrust into the spotlight because their younger sister’s death got all this attention because of her famous husband and the work that she was doing on the book. These were regular people who had a hard enough time talking amongst themselves about the realities of Michelle’s death, let alone doing it with a stranger with three cameras in their face. I remember after those interviews catching myself sighing heavily and feeling a great sadness for them, and a great sense of responsibility to tell her story. I think that this happens a lot when you’re telling meaningful and complex stories in documentary—walking that fine line of invading private people’s privacy.

We didn’t want to diagnose Michelle; we weren’t going to point fingers and say, “This is the problem.” Because we don’t know.

So how did you manage that while also shedding light on McNamara’s addiction and death?
With the support and guidance of Liz Garbus, who always make sure that we don’t cross a line, I knew that we could use these interviews in a way to reveal truth but not be prescriptive. Like, we didn’t want to diagnose Michelle; we weren’t going to point fingers and say, “This is the problem.” Because we don’t know. Sometimes these things are unknowable. We all read this amazing book that was incredibly influential in how we dealt with Michelle’s story: Perfect Madness: Motherhood in the Age of Anxiety by Judith Warner. The thesis is that the culture we live in with its demands on women and mothers to do everything, to be perfect, to be successful in their careers and to be the best mom can kind of drive people crazy. And it says that instead of stopping and looking at the hard stuff, you avoid your career by obsessing over your kid’s birthday party and you avoid the stresses of your family life by obsessing over your career. These short-term fixes, like self-medication, help to avoid getting at the bigger problems. This is a theme throughout this series—like with Patton’s experience of grief or the survivors’ coping mechanisms—that if you don’t do the hard work to look at the dark stuff and to let it out of you, it will eat you alive.

This interview has been edited for clarity. 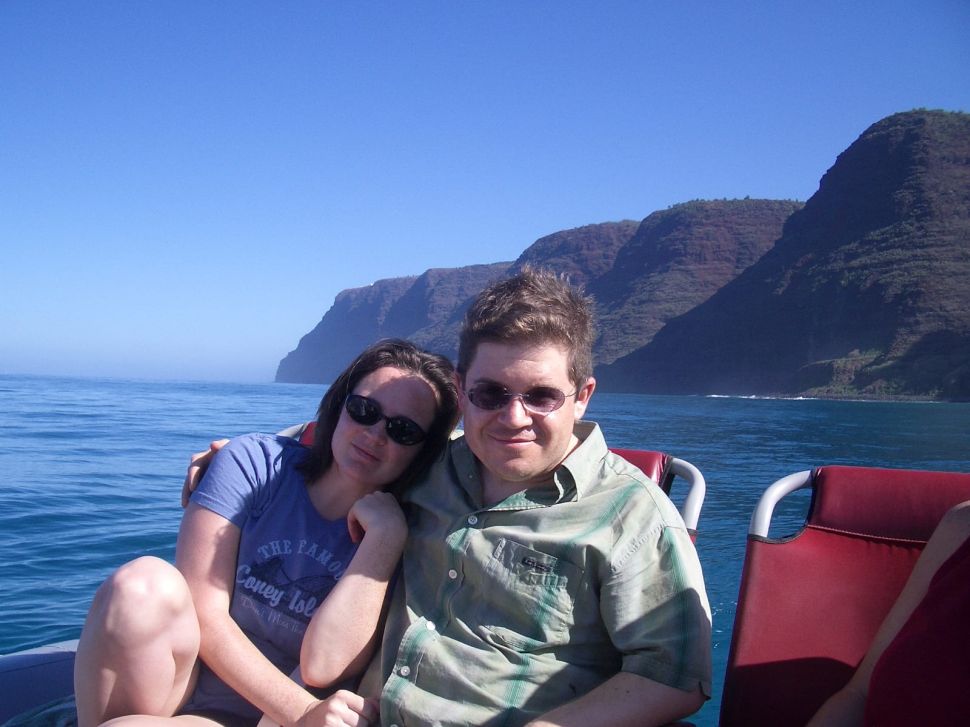