With fans still unable to cheer on their favorite teams from inside the stadium, Japanese baseball teams have been getting creative—and in the case of the Softbank Hawks, smart with marketing.

The Fukuoka-based club, which has won the Nippon Professional Baseball championship three years running and four out of the last five, debuted a squad of robot cheerleaders on Tuesday at their home stadium, the Paypal Dome. The cheer crew, which includes at least 20 humanoid Pepper robots clad in Hawks jerseys and 20 Hawk-hat-wearing quadruped robots, offers both encouragement and an impressive array of dance moves to liven up proceedings.

Like the league’s 11 other stadiums, the 40,000-seat ballpark has been empty since the belated start to the NPB season, robbing the games of their typical color, music, and flare. Japanese baseball fans are famous for their coordinated songs and cheers, designated fan sections, and creative signs, so the army of robots have been tasked with reproducing at least a fraction of the excitement. In the video below, the squad is dancing to the Hawk’s team song, “Iza Yuke Wakataka Gundan,” during the 7th inning stretch.

I’m not sure ifthe robots paid to get in. pic.twitter.com/GmpIGtDtt0

In Japan, teams are named after their corporate owners, which makes the Hawks a part of the massive Softbank holding company. One of its subsidiaries produces the humanoid robot known as Pepper, which has become a common sight in Japanese households and businesses. Pepper has been used as a companion for the country’s large elderly population and has also been put to work in the retail sector. It has an advanced AI system that allows it to recognize faces and interact with people.

The other robo-cheerleader is a quadruped named Spot produced by Boston Dynamics. It’s been used largely for construction site surveying and data collection in dangerous places, and recently went on sale to the general public for the cool price of $74,500.

The cheerleading squad will continue to appear at the PayPal Dome through July 31st, while NPB will begin to allow a limited number of fans to attend games on a test trial basis on July 10th. 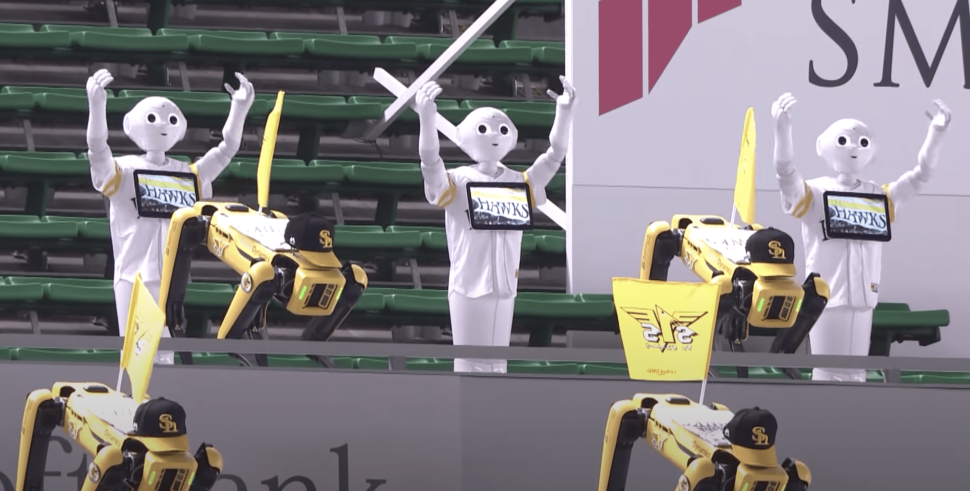