In early June, protesters in Bristol in the United Kingdom made global headlines when they enthusiastically tore down a statue of slave trader Edward Colston and tossed it into the harbor, symbolizing a mass global rejection of lingering racist history. In the aftermath, Black Lives Matter protester Jen Reid climbed atop the statue’s empty plinth and instantly became a symbol of resistance when she was photographed there, which is why the artist Marc Quinn decided to create a statue of her. Quinn then installed his statue in the space where the Colston statue had been, but according to new reports, the city of Bristol only allowed the Jen Reid statue to remain there for a day.

“I understand people want expression, but the statue has been put up without permission,” Marvin Rees, the Mayor of Bristol, said on Twitter. “Anything put on the plinth outside of the process we’ve put in place will have to be removed. The people of Bristol will decide its future.” Additionally, Rees clarified in an interview with SkyNews that taking down Quinn’s statue wasn’t a commentary on its message. “We aren’t taking down a statue of a Black Lives Matter protester, we’re taking down the work of an artist who erected it without permission,” Rees said.

SEE ASO: Protesters All Over the World Are Tearing Down Racist Monuments

Despite the mayor’s protestations, it certainly is evocative to think about the fact that an “unauthorized” statue of a Black woman will be removed by the city in just 24 hours, whereas statues of long-dead slave traders are allowed to remain standing all around the world for decades or even centuries, despite the horrifying ideas they represent and symbolically uphold. The council has decided to keep the sculpture of Reid, which is officially titled A Surge of Power (Jen Reid), in the Bristol City Council museum. Quinn, meanwhile, is working on his next public project. Next year, he will install a piece intended as a commentary on the migrant crisis on the front steps of the New York Public Library; the sculptures will feature two cubes filled with frozen blood donated by refugees and non-refugees 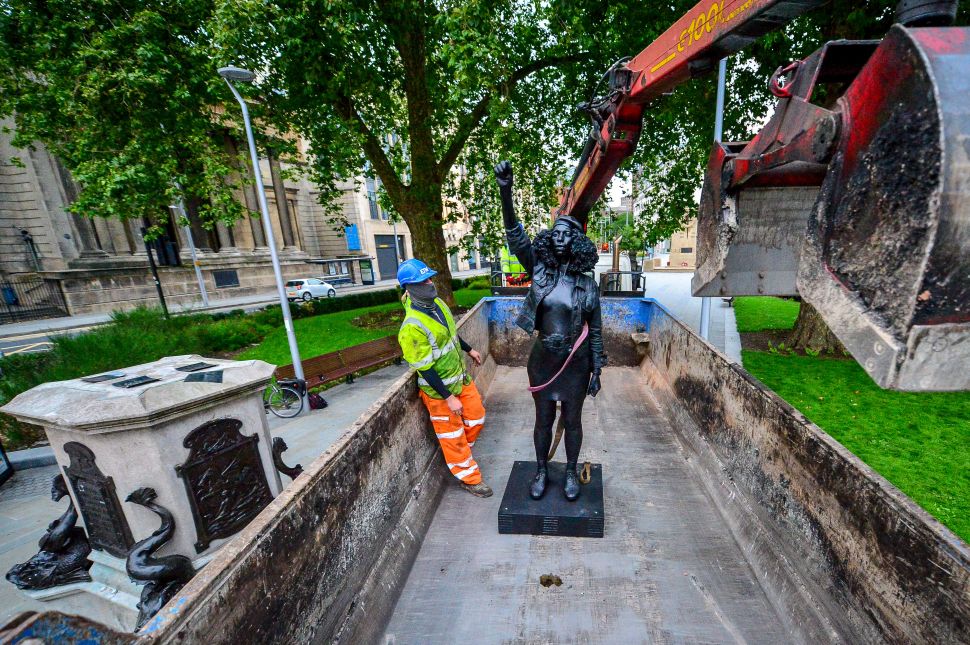