“Any sufficiently advanced technology is indistinguishable from magic,” noted the legendary science fiction author author Arthur C. Clarke about half a century ago. And it’s probably just as well to ascribe to magic the complex and sophisticated process that enabled the first in the series of Met Stars Live in Concert. Superstar tenor Jonas Kaufmann was whisked from an abbey in rural Bavaria to my home office in Queens,  in HD video and as near to real time as makes no difference!

The real marvel of this technological wizardry is that it is so elegantly crafted it almost completely recedes into the background. The half-dozen moving cameras, the elaborate mixing board and of course the distribution of the polished product serve humbly and effectively to spotlight Kaufmann and his music. The result is intimate and informal, almost like a visit to the tenor’s drawing room after dinner. (That is, if we were currently going to people’s houses for dinner.)

The program clearly seemed conceived to broad appeal: a dozen arias from romantic and late-romantic Italian and French composers, all of them brief and moving swiftly to the point: that is, a ringing high note in the vicinity of B-flat.

That range, and to an only slightly lesser extent, that style, suit Kaufmann handsomely. At 51, the singer retains a burnished bronze tone and a thrilling method of leaping up to those very effective high notes. On Saturday, only a trace of a scratch marred the dark splendor of his middle voice.

I must say, though, that the unremitting heroics of the various short numbers began to wear me down after a while. Even in a program lasting barely 80 minutes, there’s only so much wild-eyed exultation one can take. And that’s especially true in this case, as Kaufmann is not at his absolute best in Italianate clamor, but rather in moodier, complex moments, such as the ones demonstrated on archival video during scheduled breaks in the proceedings.

A novelty of this program was the subtle performance of pianist Helmut Deutsch of a couple of orchestral interludes from “verismo” era operas, complementing Kaufmann’s sung repertoire. It did feel like a tiny gaffe for Deutsch to include an excerpt from Manon Lescaut, an opera Kaufmann notoriously canceled at the Met on barely two weeks’ notice back in 2016.

This jewel of a program, just the thing for a romantic summer evening, will remain available online through July 29, at which time the Met will offer another superstar recital, this one from Renée Fleming, live in the music room of Dumbarton Oaks mansion in Washington DC.

Kaufmann “returns” Sunday July 26 for a streaming Met performance of Puccini’s La Fanciulla del West opposite Eva-Maria Westbroek, and earlier in the week the company offers such delights as Anna Netrebko and Roberto Alagna in Roméo et Juliette, and Fleming once again in Der Rosenkavalier. 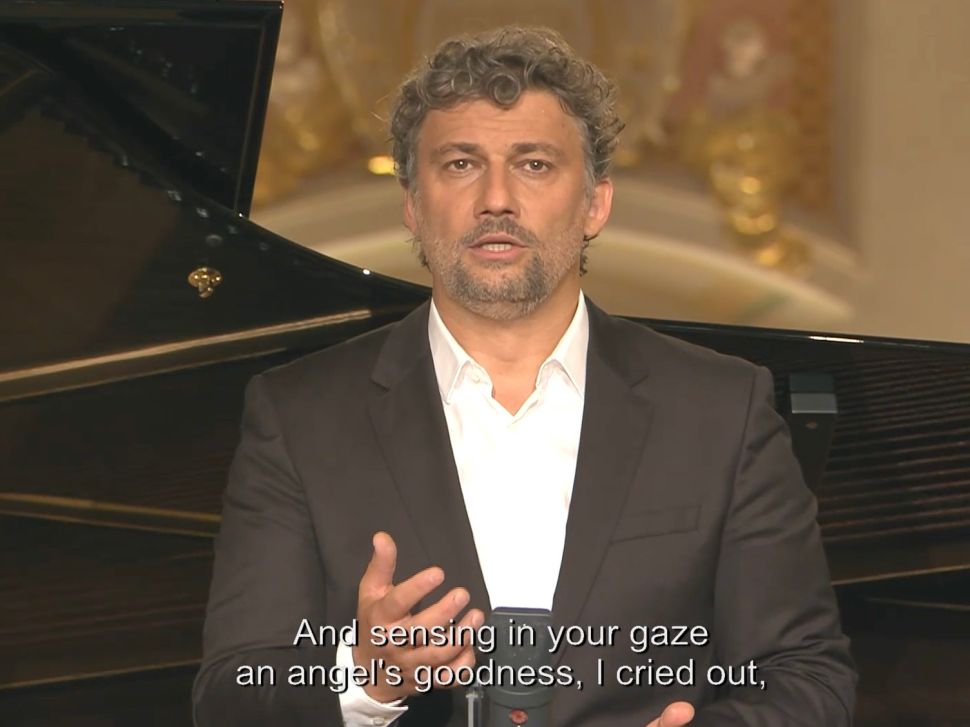