It seems easy to speculate that what writers want most is to be published and read. The truth is that publication doesn’t necessarily satisfy that secondary desire; most debut novels don’t become bestsellers. Four years ago, I read Lynn Steger Strong’s debut novel, Hold Still, in transit while uncomfortably pregnant. Traveling around Missouri and Oklahoma, it wasn’t the characters or the brownstone in tony Park Slope, Brooklyn, that connected with me. What kept me reading were the raw needs of a mother and daughter grappling with an unforgivable accident, aching to be seen and loved, no matter how distorted or strained their relationship had become. I loved that book with its wounded characters and tough questions. At the gate in the Tulsa airport, I gave my copy to two women discussing their favorite novels. Eager to pass down an emotionally honest book, I hoped Hold Still would find an audience.

While Hold Still didn’t break out, Strong continued to write and teach in New York. In subsequent years, her many essays on downward mobility, culture and parenthood found a fierce following. Strong’s essays lay bare the stark facts of life navigating a childhood of privilege only to find one’s self as an adult without a safety net. Although it’s very possible that she could have published a collection of essays next, four years after her first book, Lynn Steger Strong is now publishing a second novel called Want This novel haunts many of the same streets as Hold Still, but this time, it engages with a radically different set of circumstances.

Hold Still centers upon a tenured professor at Columbia University, living in a beautiful brownstone running up against the limits of unconditional love. By contrast, Want concentrates on the tenuous livelihood of Elizabeth, an adjunct professor barely getting by with an underemployed husband, living in a cramped apartment with two kids and an impossible burden of debt—medical and educational. Both novels also map the same campus with two highly sensitive scholars each committed to a life of reading and teaching. Although each finds herself at a point of crisis, the conditions under which they struggle expose the inequalities of teaching in the contemporary higher education system.

Much of the subject matter of Strong’s recent essays comes to life as Elizabeth juggles demanding jobs (adjuncting at night but teaching at a charter school by day), a painfully strained relationship with her parents and a hopeless sense that her luck simply won’t improve. Elizabeth describes herself and her husband, saying, “We were eighties babies, born of plenty, cloistered by our whiteness and the places we were raised in…we were brought up to feel that if we checked off certain boxes we’d be fine.” Their illusions were first shattered on 9/11 and again during the financial crisis of 2008. Theirs is a life beyond luck and yet, there’s still privilege at play.

Despite many challenges, Elizabeth possesses an uneasy awareness that this “thirty-four-year-old J. Crew-cardigan-clad white woman with an Ivy League PhD” can skate by given that the charter school’s CEO “likes the feel” of her. She doesn’t have as much to prove to her employers since she embodies their vision of success. It’s also worth noting that this is Elizabeth’s first full-time job in her life.

Over the phone in Brooklyn, Strong spoke with Observer, “I spent a lot of time reading about race and thinking I wanted to write about race, but feeling like I couldn’t write about race. One of the ways to engage with race as a white person is to acknowledge my whiteness, and just to acknowledge all the ways that I’m implicated in my whiteness and the power of my whiteness, and the privilege of my life.” In Want, Elizabeth recognizes, “We made so many choices based on what we thought the world was, what it wasn’t any longer, what we’d been told it was but what we finally understand that it had never been.”

Whiteness is a cloak of privilege that Elizabeth uses to her advantage. After filing for bankruptcy, Elizabeth finds little relief in her temporary respite from financial doom. During her work day, she capitalizes on downtime to leave school grounds. First, she walks to a museum or reads in a coffee shop before her evening class. Then she begins to lie about sick days.

The blind eye of her employers afflicts Elizabeth. Although she tells herself that she makes conscious choices to eat healthy so that she may nurse her daughter, she continues to eat sour gummi candy and other food to such a degree that she has developed a dental problem. And though she tells herself at an uncomfortable dinner that she feels drunk because a second martini is too much for her, she drinks throughout the course of the book even when she doesn’t enjoy it. Sex also becomes monotonous and disembodied.

When pressed about this, Strong notes, “The only space that she has left to enact agency is inside of her body. The only refusal that she can exercise is to not take in certain things. There’s a moment in the book where Elizabeth tells her husband, ‘You’re not the problem. Men are the problem,’ but she feels so generally ineffectual in the face, not even necessarily of men, but in overarching systems that she can’t help but think of him as representative of those systems. She has to refuse or not allow herself to desire him because to desire would be giving in, but this is one space she cannot give in. She can’t quite get to the space where she can allow herself to desire something as sort of simple as pleasure. She has to steal it.” Elizabeth tells herself lies when she doesn’t want to face the truth that professional stability is a fairy tale, the world is unjust, and she may never find the emotional grounding she craves. She hides in books and running. The accumulated thefts of time away from her work, her children, her husband, her friends add up. With no one to check her, she begins to dissolve into herself.

It’s this sense of disappearing that prompts Elizabeth to reach out to the one person she felt saw her truest self: her estranged childhood best friend Sasha. The two haven’t been close since Elizabeth stepped away from Sasha at a pivotal moment in her life. Respecting that rupture, Elizabeth limits herself to the occasional text message (“I hate emojis. As if, all of a sudden, we have agreed that words don’t work.”) while mostly keeping tabs on Sasha through social media. When the two were in college, Elizabeth remembers wishing that Sasha would “feel more for me than any other person.” Theirs was a codependent, complicated friendship between two children who thought they were adults.

Elizabeth clings to that keen sensation of desire as the world around her crumbles and erupts in various ways both horrific and degrading. Aside from her friendship with a visiting writer to whom she unburdens herself over meals she can’t afford, Elizabeth remains largely closed off to the world, unconscious of the burden she places on her colleagues and the projections she places upon her neighbors. Her ongoing sense that making peace with Sasha may also resolve her inner struggles is as naïve as her assumption that she truly knows the people she sees day in day out. After a gruesome murder takes place late in the novel, Elizabeth muses, “I try to hold inside my head the fact of her being gone. I don’t know, though, what to do with this fact. The specific shape this sadness takes is knobbed and awkward. We did not know her really.”  Strong remarks, “It’s so scary to me and fascinating to me, the ways that we sort of walk around with versions of other people in ourselves inside of us and enact them sometimes without even wholly realizing what we’ve done.” Beyond testing the boundaries of love and friendship, Elizabeth dangerously skirts the limits of her own privilege.

This deep examination of selfhood is what brings Strong back to novel writing as opposed to simply exploring these topics through nonfiction. “I am interested in the idea of watching someone process a boundary and forcing someone to watch someone else cross that boundary then track the consequences of that action. That’s why I’m ultimately more interested in fiction; I want to enact those actions and reactions and consequences, and I want to follow those threads.”

Fiction offers her a way to begin with elements of her life and then shape them to serve the points she wants to make. Elizabeth is brilliant but absent, just out of reach—even in her presence. Intensely compassionate and generous at moments, she’s inaccessible and caustic at others. Her sensitivity and anger keeps her off balance in a world where the odds are stacked against so many. She subverts the notion of the traditional flâneur, running to clear her mind, circling the city to escape the structures that she can’t control. She’s a spellbinding figure, particularly at this moment when, like Elizabeth, we’re all keenly aware of the failures of society.

Elizabeth, is in broad strokes, a container for many elements of Strong’s own life, but this is not auto-fiction. Strong says, “The way that this book inevitably can be put in conversation with my own life is that I absolutely believe that fiction is a performance. And I very much wanted to perform a level of intimacy with the reader and with Elizabeth, that for the most part actually makes me a little bit uncomfortable in real life.” The alchemy of that intimacy is akin to a time bomb. While Hold Still uncovered the depths to which love may be tested, Want situates itself under your skin with a raw understanding of lost faith fused with the ache for bottomless love and acceptance. Capturing the chaos of this modern moment, Strong strips away at the imbalance of advantages that ultimately injure us all and the collisions that never cease. Yet, in this stunning novel, she never loses sight of the irrepressible desire to love, connect and forgive one another. 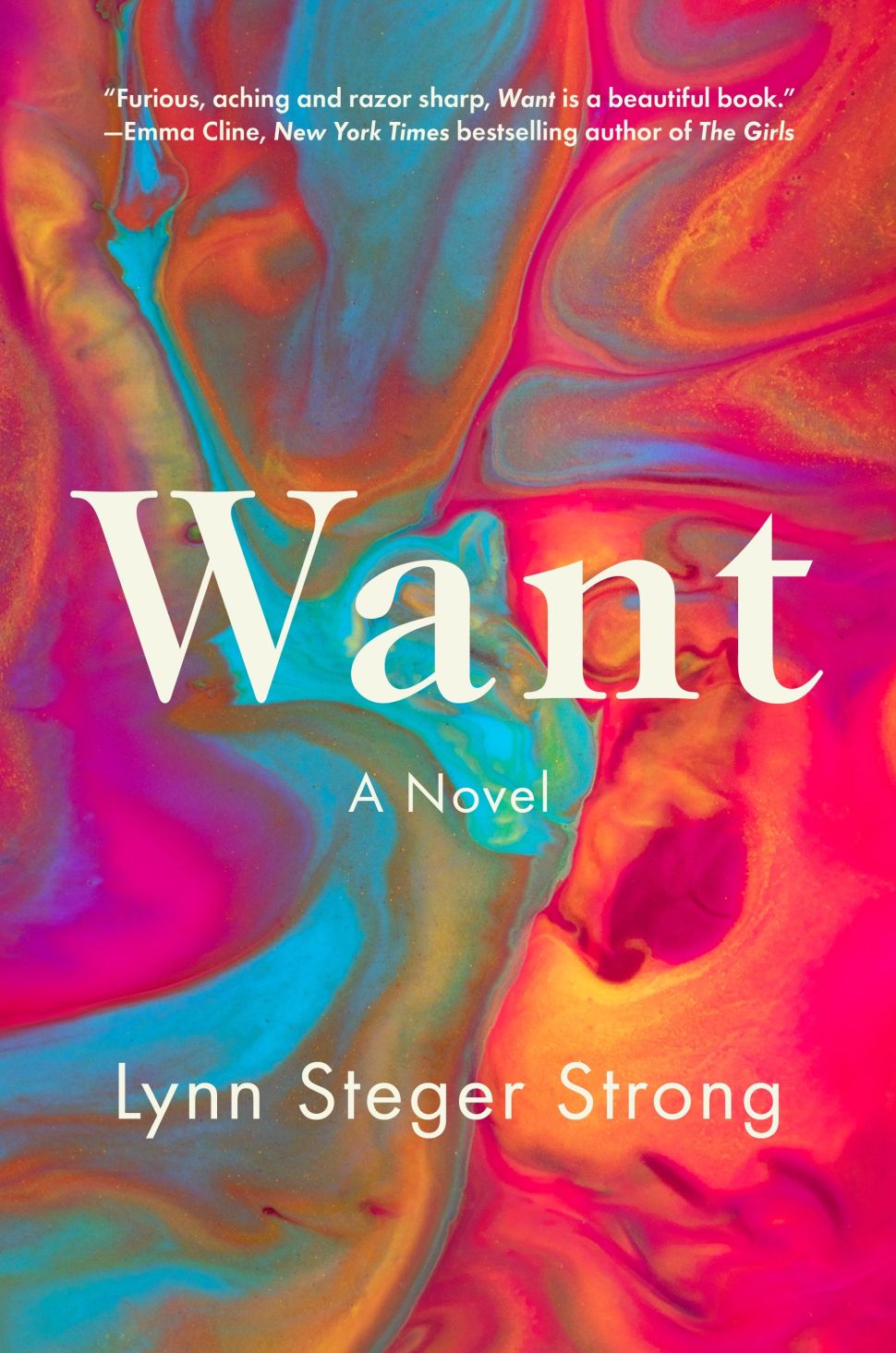