With art museums closed and the entire world in uproar due to the coronavirus and a reckoning triggered by the killing of George Floyd, the destruction of racist, colonialist or otherwise offensive statues has become something of a new global movement. Most recently, on July 4, a wooden sculpture of the United States First Lady Melania Trump was burned near Trump’s hometown of Sevnica, Slovenia, according to the artist who constructed it. Commissioned by the American artist Brad Downey and executed by the Slovenian sculptor Ales “Maxi” Zupevc, the sculpture was designed to mock its subject, but apparently the message didn’t get across.

Downey, who is an American artist based in Berlin, told Reuters that police informed him of the sculpture’s destruction on July 5, and that subsequently he had the charred remains taken down. “I want to know why they did it,” Downey added; the culprits have not yet been found. Downey said that he’s interested in interviewing the people who burned down the statue for a film he’s producing in anticipation of an exhibition of his that’s due to open in Slovenia this coming September. It appears that with figureheads as controversial as the Trumps, even if statues were created in their image solely to mock them, those statues were offensive enough to someone that they had to be destroyed.

Interestingly, Tomaž Schlegl, another Slovenian artist, also created a monumental sculpture of Donald Trump adjacent to the Melania statue in the village of Sela pri Kamniku; that statue was also also burned in January. “Trump is the personification of total liberty, because he has shown that he can do and say whatever he wants, and he won’t be held accountable,” Schlegl told Observer last September. “But I leave all that interpretation to the public.” Apparently, the public has responded. 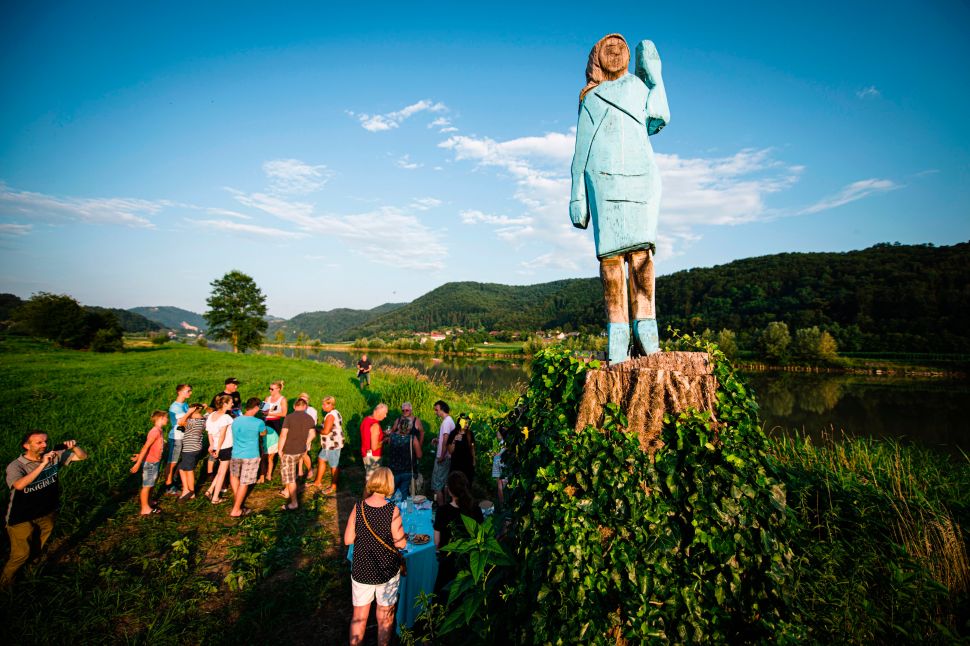