A controversy involving the Metropolitan Museum of Art flared up over the weekend, when a Twitter account representing the website stopantisemitism.org called out the museum for allegedly mislabeling a 6th century amulet from Egypt in its Islamic art department. According to the @StopAntisemites account and other commenters, the object in question is not an amulet, but rather a tefillin; these are cubic leather black boxes traditionally used in Jewish prayer and are considered extremely sacred. The accusation that the Metropolitan Museum of Art had mislabeled an item in its collection was also picked up on Twitter by Caitlin Hollander, a genealogist who works for Hollander-Waas Jewish Heritage Services.

Institutions must be rigorous in verifying that best practices are being used when identifying items from cultures across the world. In November 2019, an account unaffiliated with the Met that shares public-domain images from the museum’s Islamic collection posted the image on Twitter. One commenter pointed out the object appeared to be mislabeled. It’s unclear if, prior to this weekend, the issue had been raised with the museum directly. Tefillin objects in particular have been targeted in antisemitic attacks, so for a tefillin to be allegedly mislabeled in a museum understandably strikes a nerve.

Hey @metmuseum we have a slight problem … why are you calling #teffilin an ‘amulet’ and then categorizing it as #islamic art when it’s literally the most sacred religious item for men in Judaism?! 🤦🏻‍♀️ pic.twitter.com/EpQHcgfcO6

However, Raphael Magarik, an Assistant Professor of English at the University of Illinois-Chicago, also stepped in on Twitter to offer some context on why the object might currently bear that label. “There’s no reason not to call tefillin an amulet,” Magarik wrote on Twitter. “Lexically, the Greek term now commonly used to refer to them (“phylactery”) originally meant just that, and had a long history of usage in that sense before referring to the specific Jewish items.”

“Also, in this particular case, there’s the obvious point that a Met catalogue entry for a random, provenance-less object is going to be pretty unreliable—I’d bet some money this particular artifact is not from 6th Century Egypt, for instance,” Magarik added. The Metropolitan Museum of Art has not yet commented on the matter. 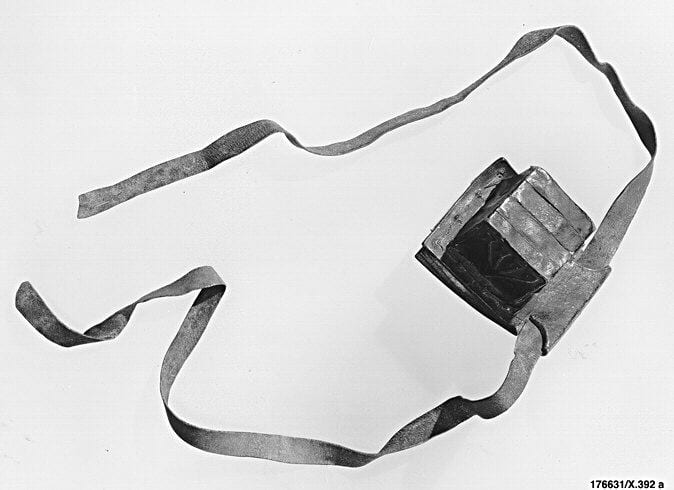