In the midst of a worldwide dialogue about statues and what they represent, an American Holocaust research center is adamantly suggesting that a particularly historically-charged object should be sold to a museum so that it doesn’t wind up in the possession of white supremacists. The object in question, an enormous bronze eagle bearing a swastika in its talons that was discovered off the coast of Uruguay in 2006, is about to be auctioned off and could reportedly be worth approximately $26 million. Where the eagle will end up is an especially urgent question, due to the fact that a resurgence of the fair right has lead to a global uptick in the profitable sale of Nazi memorabilia.

In a statement published on their website, the Simon Wiesenthal Center emphasized that without prioritization for institutions or individuals who would want to use the eagle for beneficial, educational means, a public auction could easily be hijacked by white supremacist sympathizers. “Both the German authorities and the Wiesenthal Center have taken the position that such artifacts cannot serve a growing extreme right market and white supremacists or even a sick trafficking, as in a bid to display the swastika eagle at the World Cup in Doha, Qatar,” Dr. Shimon Samuels, the Director of International Relations at the Wiesenthal Center, said in a statement. “We urge the Uruguayan authorities to ensure that the display of these symbols serve as a warning to future generations of what should never be repeated.”

SEE ALSO: A Statue of Black Lives Matter Protester Jen Reid Was Taken Down in Bristol

The eagle artifact in question was taken from the prow of the Admiral Graf Spee battleship, which sunk in the Montevideo harbor in December of 1939. Additionally, when the eagle is eventually sold, the question of who will profit from it was settled by the Uruguay Supreme Court in 2014: the dividends will be split between the company that salvaged the object and the Uruguayan state. Given that Uruguay stands to directly benefit from the sale of Nazi iconography, its government then has a huge responsibility to ensure it doesn’t fall into the wrong hands. 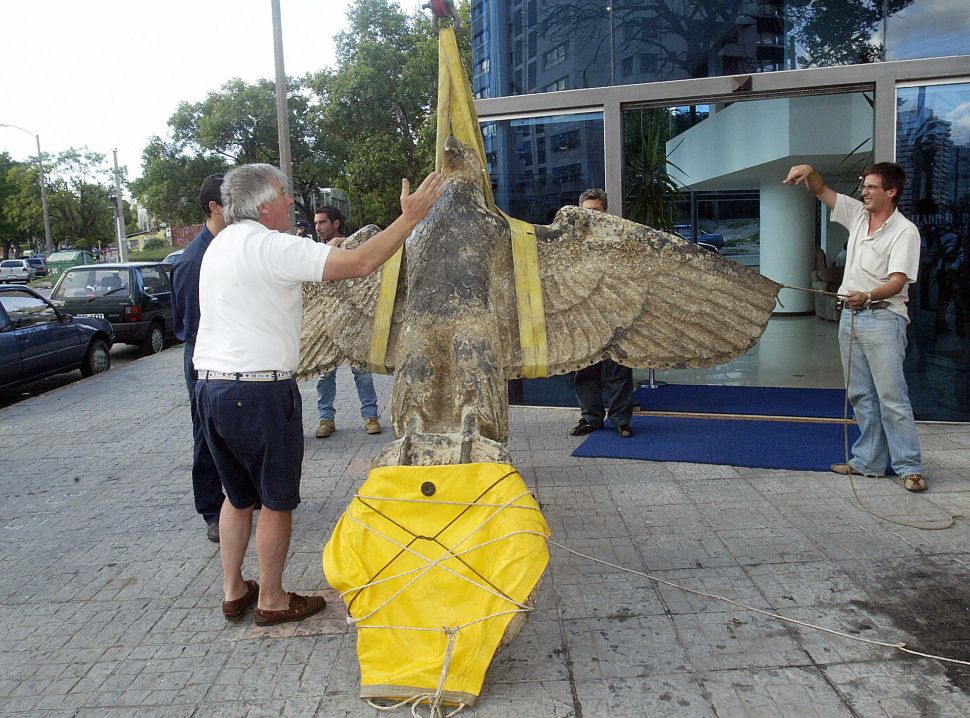