Prior to the coronavirus pandemic, Netflix was planning to spend a staggering $17 billion on content in 2020 alone. While production has largely been halted the world over since March due to COVID-19, Netflix continues to churn out upwards of 50 new original releases every month. Between Tiger King, Extraction, Dead to Me, 13 Reasons Why and Dark—the streamer has been the only consistent provider of fresh, buzzy content over the last several months. It’s the driving factor behind the company’s continued ascension.

Next up for the streamer is Cursed, a reimagining of the Arthurian legend told from the perspective of Nimue (Katherine Langford), known better as the Lady of the Lake, an enchantress who gave Excalibur to Arthur, crossed paths with Merlin, and would go on to raise Lancelot. In the series, which takes place years before the tales of Arthur tales and arrives on Netflix today, she’s a young woman ostracized by her own people for her magical abilities, yet still sets out to save them with the help of the young and charming mercenary, Arthur.

It’s a fantastical setting, based on the illustrated novel of the same name by Frank Miller and Tom Wheeler, that blends magic and fantasy with sword-and-sandal fare. Helping to bring that vision to life is producer and director Zetna Fuentes, who helmed the show’s first two episodes. Not only does Fuentes introduce audiences to this new world, with its established rules and hierarchies, but she also orchestrates a badass two-plus minute tracking shot in the heat of battle. Here’s how she pulled it all off.

Observer: Entertainment steeped in genre always tries to include motifs of that genre while also creating its own unique visual aesthetic. How did Cursed borrow inspiration but also try to carve out its own niche?
Zetna Fuentes: We had so many ongoing conversations from day one about that very idea. We are collaborators from Tom Wheeler to the amazing Frank Miller and our DP and our department heads. Everyone was drawing from their favorites, their inspirations, what they loved, different genre pieces. I love Lord of the Rings and the sweeping, beautiful vistas. We had all those conversations and really thought about what we want to do with this so that it can feel like its own singular world.

What was the intention behind the animated transition between scenes? That’s something you don’t often see in mainstream live-action TV.
We talked a lot about what Frank’s aesthetic is and how it was going to be woven into this story and into the visual language. We talked a lot about wanting to do it again in our own way and wanting to an homage to Frank and his brilliant work. When we were working on the material, it just felt like we could dig a little deeper and try to find an aspect of the fable and story that we could infuse a bit more. It’s a layer of this fable-like quality.

I found the highlight of the pilot episode “Nimue” to be that two-minute tracking shot during the raid on Nimue’s village. Could you walk me through the planning, development, and execution of that take. It seems extremely difficult to pull off, even if there are some hidden cuts in there.
You know what? There are no hidden cuts in that.

That’s impressive.
We worked really hard on that. In the initial conversation, we discussed not doing it because we didn’t want it to feel like a gimmick. But we kept going back to it and thinking, “‘You know what? It serves the story.” Once [Nimue] fell off that horse, we wanted to go through that village with her in her head from her point of view without leaving it. We thought that was really important.

Obviously, a lot of effort and planning was required to make it work. You have horses, you have fire, you have smoke, you have sand. Once we really committed, everyone was on board. Especially Katherine. She was amazing. She always wanted to go for it, she was so excited about it. And then our amazing steadicam operator, Danny Bishop, his support with his team who had to get him through that village. It was a lot of planning, but I’m hoping really worth it for the storytelling.

How long does a sequence like that take to film? How many attempts?
We had a great plan going in. Amazing AD department, amazing stunt coordinator. The special effects, the visual effects, everybody. We had a full day of the stunt team really rehearsing the path over and over again while we were shooting something else. They spent a whole day rehearsing and then we spent a day executing it. Just making sure that we got it right. The stuff going down the hill while they’re on the horse before they fall, all of that. Because we had such an intense prep process, we executed it a bit quicker than we anticipated, which was amazing.

I know they are two very different shows, but since they’re both steeped in otherworldly genre, how does directing something like Cursed compare to directing Jessica Jones, which I know you did in Season 2.
Jessica Jones, interestingly, was also so good in character. A lot of the conversations I had going into that was about how it was a very different kind of superhero show. And it really was, I love that show. I think that was similar to our world where we wanted to root everything in character and everything else comes second. The powers and the magic, for me, it’s always more about, “Do you care about these people? Do you care about their relationships? Do you want to know what’s going to happen next because you’re really invested?” I think Jessica Jones did that brilliantly across the board and I hope that what we did with Cursed. 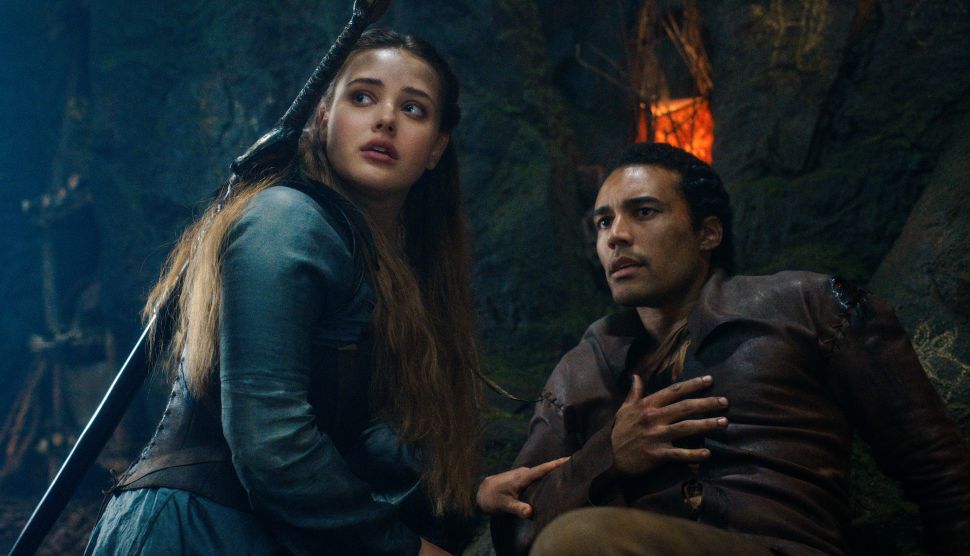