Today’s Google Doodle honors Pacita Abad, a prolific Ivatan and Filipina visual artist whose multi-decade career included experimentation with everything from painting to mixed media assemblages. Before she died in 2004 at the age of 58, Abad  traveled widely and used her artwork to highlight pressing social issues. The most vivid example of this is her “Portraits of Cambodia” series, which highlighted the day-to-day lives of citizens as well as brought attention to violence against women. 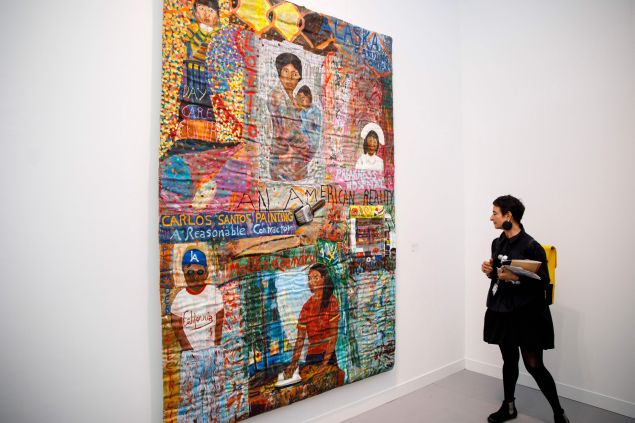 Pacita Abad’s ‘I thought the streets were paved with gold’ at the Frieze Art Fair in London in 2019. TOLGA AKMEN/AFP via Getty Images

However, Abad also deserves much commendation for her innovations in artistic technique. Abad pioneered a painting technique called trapunto, which was inspired by a quilting method of the same name. Used in painting, it involves stitching and stuffing the canvas with various different materials in order to give it a three-dimensional effect. This practice blossomed into Abad’s multi-dimensional way of making her artworks more textured: she added things like shells, buttons, beads, mirrors and traditional cloths to her canvases at different times. Abad brought this trapunto three-dimensionality to many different subjects of her paintings. Using this innovative stuffing technique, Abad brought her abstract concepts, her paintings of the immigrant experience, her ocean paintings and her paintings of dancing women more fully to life.

In her Feminist Artist Statement for the Brooklyn Museum, Abad also spoke passionately about her motivations as a creator. “As a politically concerned artist, many of my paintings tell the stories of people, and especially the women, that I have met and talked to along my way. As can be imagined, this has not always been pretty,” Abad wrote. “Although I have tried to raise awareness of these issues through my paintings, I know that it is but a small effort to help address these problems and so much more needs to be done. As women, we all have an obligation to help improve the lives of other women, both in our own countries and around the globe.”