When carefree Nyles (Andy Samberg) and reluctant maid of honor Sarah (Cristin Milioti) have a chance encounter at a Palm Springs wedding, things get complicated when they find themselves unable to escape the venue, themselves or each other. That’s the thinly veiled synopsis provided by distributors Neon and Hulu after they joined forces to make Palm Springs the biggest single-film acquisition ever out of the Sundance Film Festival at $22 million. It’s pithy and explanatory, but hardly does the story justice.

The truth is that Nyles and Sarah are struggling against otherworldly forces, which are hilariously highlighting and exacerbating their existing flaws. To unmoor themselves from the hellish reality in which they’re trapped, they’ll have to better themselves in ways they never thought they were capable. It’s a clever conceit concocted by screenwriter Andy Siara, who plums the depths of nihilism and emotional immaturity to provide authentic hilarity and genuine emotional growth. It’s Groundhog Day mixed with When Harry Met Sally and it’s subtly one of the best new movies to arrive in an otherwise depressing cinematic year.

Observer spoke to Siara to discover the original inspiration behind the film, how it was developed and what it felt like to set the Sundance record ahead of Palm Springs‘ debut on Hulu July 10.

Observer: Can you walk me through the early development phase of Palm Springs and how it came to be?
Andy Siara: [Director] Max Barbakow and I met on our first day at AFI back in 2013, and we just immediately hit it off over a shared love of indie rock bands, TV shows and movies. We’re also both little brothers, so there’s a little shared outlook on life. We started making shorts together at AFI, and then as we finished up our second year, we thought, “Hey, let’s do our first movie together. Let’s do something small and contained that we know we can at least try to get made. I’ll write it, you direct it.” So a week after graduating, we went out to Palm Springs, which we both had a relationship to after growing up in Southern California. We had a relaxed weekend where we talked late into the evening over mai tais and trying to figure out what kind of movie we want to make. We came out of that weekend not really knowing, except we had the kernels of the character Nyles. Over the next couple of years and many drafts later, the rest was born out of conversation.

Given that the movie takes place in an infinite time loop and potentially touches on string theory, I now want to see the other drafts for the other holidays and occasions that could have been the driver for previous versions.
It’s funny because one of the notes in any script or movie is that “I want to know more about this person’s backstory.” What was actually so helpful about starting different versions of the movie before we ever even added the time loop was that I wrote many versions of Nyles. Many pre-stories and background so that I knew this character like the back of my hand and that helped when we finally landed on what Palm Springs would become. When we decided to do the time loop, I felt like I already knew and had written what a day in the life was like prior to that. So we didn’t need to spend any time in the movie exploring what would happen to Nyles the first time he went into the cave or before the wedding. We didn’t spend a minute in that world because I’d already written it.

Nyles is this cynical whatever-floats-your-boat kind of guy, and Sarah is this reluctant underachiever. How did you land on those traits as their defining character flaws?
The first thing that comes to mind is at the end of Groundhog Day, the main character figures out the meaning of life, and he gets rewarded by getting out of the loop. And so, my jumping off point there was, “I want to do a little higher concept.” If a person is stuck in a time loop and figures out the meaning of life, what happens if he’s not given the gift of getting out of the loop? What if he’s still stuck in there, then what happens? What does that do to your life? I think Nyles has to find meaning in the meaningless of it all. In the simple pleasures like floating in pools, drinking beers and eating burritos, given the scenario and being stuck in that world for however many years he is stuck, you’d probably become careless. It’s hard to care about anything because nothing truly matters. The laws that govern society don’t matter anymore, so therefore you embrace this sense of nihilism.

The other character has to have something that challenges the status quo. They need to challenge the other main characters. Through Sarah, Nyles realizes there is purpose in caring, and through Nyles, Sarah realizes she should forgive herself a bit because there’s purpose in just shrugging shit off. I think because we know Nyles so well, it was tough to challenge his outlook on life and that’s where Sarah’s character was crafted. Around this idea of ‘What is the best way to challenge and force him to change?’ In doing that, it’s like their characters became even more fully realized to us.

What I like about Palm Springs is there there are a few main characters, including J.K. Simmons’ Roy. That helps it avoid getting repetitive or stale and directly comparable to Groundhog Day. Was that a conscious decision to expand the scope a bit?
Roy was the last piece of the puzzle that we were missing and the very last thing I added in the script right before we finished it up. Roy, the character, functions almost as this shadow side to Nyles, and I think we can go that route or you can just say the movie was missing this Wile E. Coyote/Road Runner dynamic that brought a lot of comedy. That added this other absurd element to it that appeals to both of our tastes. On an emotional level, we knew there was something missing. It wasn’t so much a conscious thought that we needed to separate it from other types of movies. It was more about what is the ingredient that can bump up against both these characters and push them even further? How can we hammer out the theme a little more? Roy’s speech in Irvine changed the least from its first iteration because dialogue speaks and themes may change, but what he says at the end is basically the movie.

What did it feel like when you found out that Palm Springs had broken the all-time Sundance acquisition record?
I thought back to that first day when Max and I met at AFI and were finally around people that wanted to do the same things we wanted to do our whole lives, which was make dumb movies all day. I spent my 20s in a band avoiding making any real, more terrifying adult decisions like going deep into debt to go to film school. Not that that’s the right thing to do, but I think I was dumb enough to do that. I guess I was so happy that I could share in the meaningless of life. It’s ultimately meaningless that we sold for the most amount.

But I was so happy that I got to share that moment with Max and having been on this weird journey with him for almost seven years. All that time speaking about our deepest loves, and shames, and fears, and hopes, we were just two kids playing in a sandbox. Playing with toys. We never actually thought that we could make anything that anyone would care about. So that’s a long-winded way of saying we never expected anyone to see or care about this movie. I feel very, very lucky and fortunate that so many things just worked out.

Palm Springs is now available to stream on Hulu. 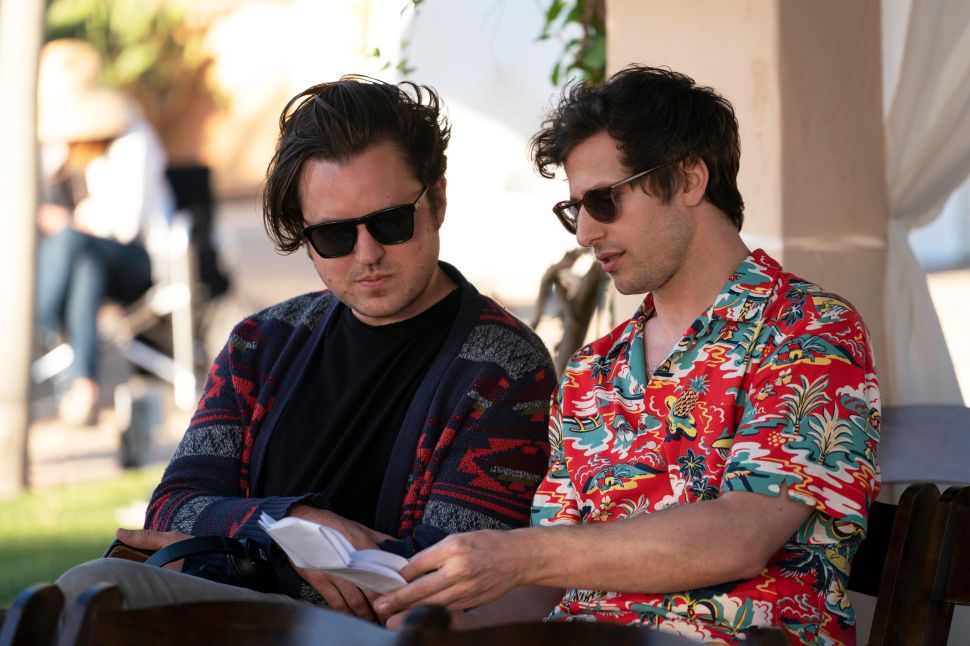