Focus on the present, our therapists have been telling us ever since our world shifted dangerously during the ides of March. We are now living in an endless string of todays, they say in one form or another over Zoom sessions only recently approved by our insurance. Be in the moment.

Unlike our therapists, who are devising on-the-fly solutions to the impossible puzzle of alleviating our out-of-control anxiety, Nyles is being literal. The day in question is November 9th in an unspecified year and, when we first meet Nyles, he has been reliving that day, when he attended an ill-fated destination wedding in the titular California desert town, for several years or so; it is difficult to tell. Unlike you and I, he hasn’t spent those countless unmarked hours doom scrolling (was Twitter around back then?) or watching Netflix. (The movie is largely devoid of cultural or technological mile markers that might peg the story to a specific year.)

SEE ALSO: The Dazzling Video Album Made by 30 Artists in Quarantine

Instead, Nyles spends his days drinking Tecates, drifting in the hotel pool in a pizza-shaped floaty and leaning into the joyful nihilism of his predicament. “I decided a while ago to give up,” he says, sounding like an awful lot of us—if not now then perhaps in a few months time. “We kind of have no choice but to live, so the best plan is to suffer existence.”

It is a strange and remarkable trick pulled off by Samberg, his Lonely Island cohort who serve alongside him as producers, as well as a pair of scripted film first-timers in director Max Barbakow and screenwriter Andy Siara, both relatively recent AFI graduates. They have made a film absent of time that could not possibly be more of the moment.

Watching Samberg’s Nyles and Cristin Milioti’s Sarah (she is a Grammy winner and the Tony-nominated star of the Broadway musical Once who played the titular matriarch in the final two seasons of How I Met Your Mother) cycle through stages of shock, grief and acceptance is profoundly cathartic and surprisingly moving. Not simply because Palm Springs has shown up in our lives on March eleventy-effing-seventh or whatever goddamn day it is—though that uncanny coincidence certainly helps.

This comedy—at once a Gordian knot and completely ridiculous—succeeds so singularly primarily because of the emotional and physical facility of both the lead and supporting performers.

Samberg and Milioti mine nuggets of comic inventiveness out of well-trodden soil as the film plays through countless variations of the same day. An early scene in which Nyles seduces Sarah with a toast and a choreographed dance at the wedding is an inspired bit of lunacy that feels like a hybrid of Steve Martin and Gene Kelly. Milioti—who in keeping with the theme comes off as an amalgam of Gilda Radner and Audrey Hepburn—has one of those endlessly expressive faces where even the slightest adjustment of her saucer-like eyes can convey a crater-sized jump from incredulity to wonder.

The fly in their budding love affair is Roy, played by Oscar-winner J.K. Simmons in a performance that is somehow simultaneously restrained and unhinged. He is a bow-and-arrow-wielding wedding guest who, after a coke-fueled night of partying with Nyles, gets trapped alongside him inside what is alternately called the “time loop” or “energy box.” His need to torture and murder Nyles (who always wakes up unscathed when the ordeal is over and the day starts again) adds the perfect amount of arsenic in this surrealist romantic confection.

It is precarious and perhaps even deadly for a comedy to be labeled important or even a meaningfully necessary reflection of the society from which it bubbles forth. Only a handful of films—the work of Charlie Chaplin, Preston Sturges and Sacha Baron Cohen come to mind—tend to survive such canonization while still succeeding at the down-and-dirty work of making us laugh.

This movie, while very good, is not quite at that level. Still, what it has to say about loneliness and finding purpose when our lives are stripped of impact and progression is quite profound and brims with urgency. The film shows us how, when it’s firing on all cylinders, comedy can help us reshape and reexamine our anxieties in a way that drama rarely does.

We may be—like Nyles, Sarah, and Roy—trapped in an endless string of todays; but at least a movie like Palm Springs can help make the next one just a little more survivable. 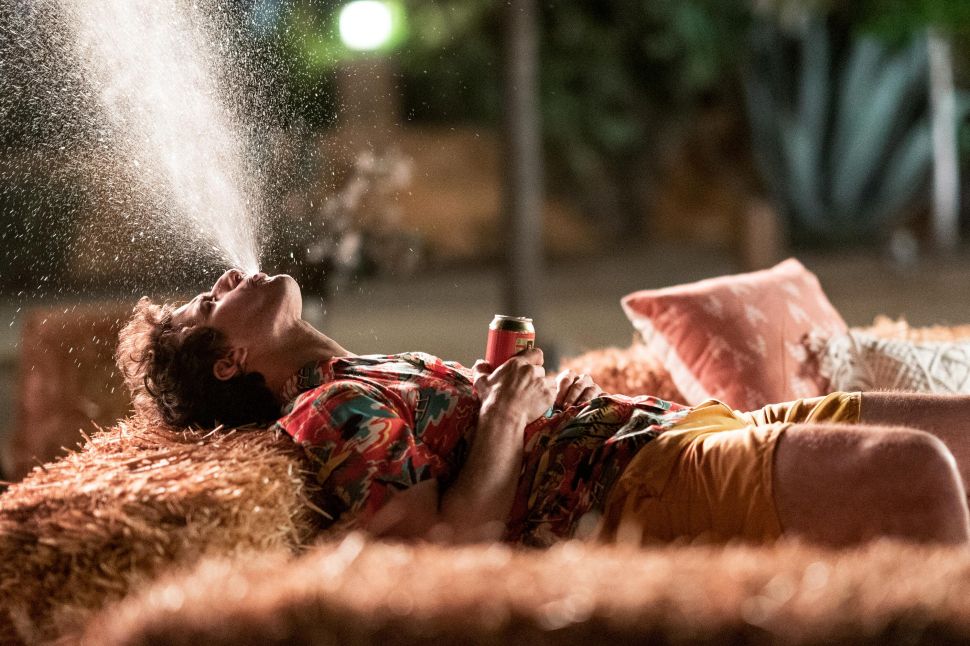