At the Lancy-Bachet train station in Geneva, 30 meter mega screens line both platforms. The work recently unveiled is a series of filmed portraits that takes the shape of two-stop motion loops. In the work, each pencil-drawn face begins to appear as the hand of an artist can be seen bringing the portrait to life. The portraits start to blink, and look around. Once the images are realised, they are erased and replaced with words chosen by the subjects. This is Kenyan-British artist Phoebe Boswell’s latest work to go on view, called Platform, commissioned as part of Mire, a public art programme in Geneva.

In these dark, polarizing and violent times, Boswell is inviting the viewer to look. This seemingly quotidian activity of seeing people is something she believes many of us have completely forgotten how to do.

“I see the simplicity in exploring and celebrating the human gestures of people who we may never meet, who may indeed fear each other or what this other may represent, as a generous and radical proposition.” Boswell tells Observer.

SEE ALSO: At 78, Glass Artist Dale Chihuly Is Adapting to New Challenges and as Busy as Ever

The process of creating the work involved a public call for self-authored photographs along with an answered questionnaire provided by Boswell. After receiving submissions, she got to work setting up her camera on a rig to film herself drawing.

“I have a strange relationship with portraiture, I love it, it is very much a part of my practice, but I also think it can be so dead and it can be so much to do with vanity,” she says. Boswell’s seamless integration of technology and scale often allows more room to explore complexities that traditional portraiture inhibits.

Though trained in figurative drawing, she explains that her style of work is rooted in a cannon that has historically refused to see her, so the multiplicity of her approach has been her method of subversion. The results of this particular work pushed her investigation into what portraiture can do further. “It definitely taught me a lot about embodiment and just how drawing can become a tool for care. The portrait just became this relic of looking.” she explains.

This same embodiment and care that Boswell speaks of reverberates through much of her work. These themes could be seen early on, in her first gallery show, “The matter of memory,” that opened at Carroll / Fletcher Gallery in London in 2014. Inspired by narratives mined from her parents’ memories, Boswell recreated her grandmother’s living room as a pathway into exploring her own identity. And care is also very present in her three-channel video piece I Need to Believe the World is Still Beautiful, which  played in aleatory loops along with poetry shown as part of last summer’s “Get Up, Stand Up” exhibition at Somerset House. For Boswell, care is always at the centre.

In 2017, an unfortunate accident would leave Boswell with a shattered eye and three weeks later she would find herself in a high dependency cardiac ward with a ruptured heart. This time around, she would be the one at the receiving end of care. “It was a horrible time. I wouldn’t wish it on anyone. A woman doctor came in and I asked her if it was heartbreak and she said of course it is, that our bodies can only take so much and your body has responded to the stress in this way.”

In an attempt to heal,  alongside therapy, she would make pieces of animation the size of a heartbeat but realised its precision felt too formal.  “I needed to do something more visceral. I had to move my body” she exclaims.

Between waiting in hospital wards, Boswell would start drawing a series of women with monocular heads; making large seascapes with charcoal; freewriting with a line inspired by a woman she met in the cardiac hospital “take me to the lighthouse”; and filming herself on the beach in Zanzibar assisted by her father operating a drone. “I had never really worked like that before, it felt like it was coming from a place and it was a different feeling to me. I wasn’t in my head and it was a bodily response.”

These would be the beginnings of what would eventually become another seminal body of work: The Space Between Things, exploring a physical, spiritual and emotional rupture and an invitation into Boswell’s journey of healing and rebirth shown at Autograph gallery in London.

In the making for this work, Boswell was getting used to a different way of seeing and trusting again. “I can’t really see on my right side, so trust in a physical sense was a really difficult thing and trusting that the audience would hold the grief was a big thing for me. I actually have to trust that the audience will care for me and the work.”

Starting with a panoramic drawing of self portraits in willow charcoal made directly onto the walls of the gallery, the show implemented all of Boswell’s visual languages, from drawing and video to sound and spoken word. The result was an immersive, delicate and haunting insight into different iterations of what it means for a body to break and be made whole again. The response and engagement was much more than Boswell could have imagined. “With the right team around your work, it can be the most healing and transformative thing you can do.”

Boswell’s new work in progress is inspired by her encounter with deep sea fishermen in Zanzibar. Called “Future Ancestors,” the series interrogates the notion of freedom and a new world beyond the confines of our imagination.

“Zanzibar is obviously a very interesting place to think about freedom, because it was a major slave port and these men were descended from mainland Africans who would have been kidnapped and brought to the sea, taken over in boats to the islands and enslaved. So I’m thinking about what this new place of freedom means with this history.”

In this new series of works, Boswell is asking bigger questions about what freedom dreams can erupt from the act of drawing and what it means to prioritise people over capital. However she is still preoccupied with the role that care can play. “I think the limits of our imagination can only be stretched when they are nurtured by these ecosystems of care. Love is an antidote to that.” 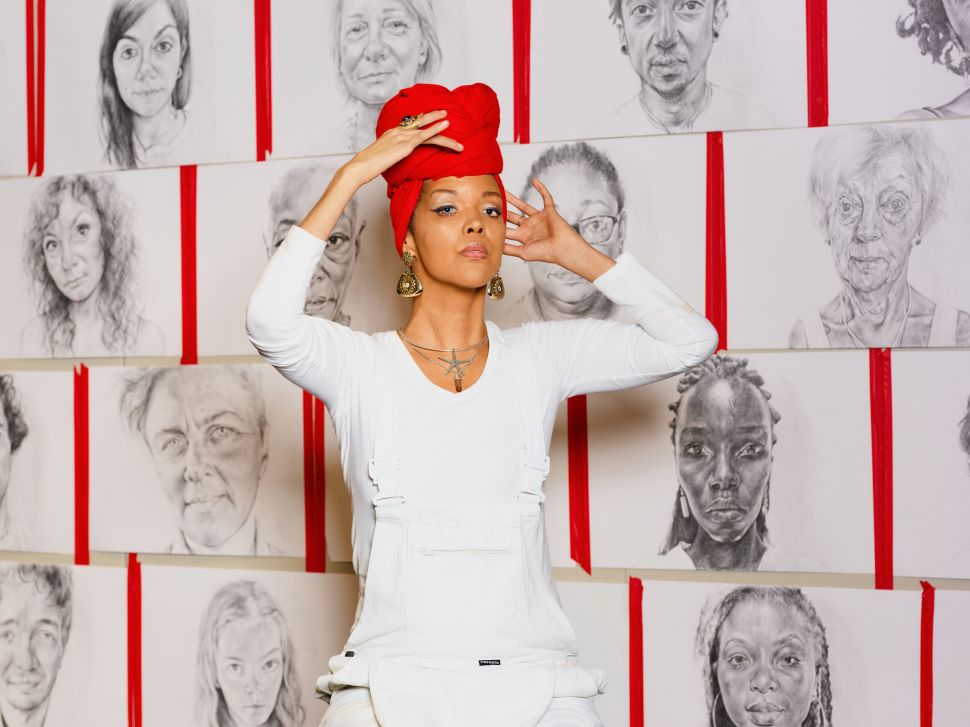