Last week, Princess Beatrice and Edoardo Mapelli Mozzi pulled off the near-impossible, as they married in a secret royal wedding at Windsor Castle. The couple, who announced their engagement last year, were supposed to wed on May 29, but canceled the planned ceremony at the Chapel Royal at St. James’s Palace, as well as the reception Queen Elizabeth offered to host in the Buckingham Palace Gardens, in April due to the coronavirus pandemic.

So on July 17, Princess Beatrice and Edoardo tied the knot at All Saints Chapel, located on the grounds of Prince Andrew’s home, Royal Lodge, in front of just about 20 people, including the Queen, Prince Philip, the Duke of York, Sarah Ferguson, Princess Eugenie and Jack Brooksbank.

About 14 friends arrived for the reception starting at 5 pm on Friday, for a party with special cocktails, catering, a bouncy castle and decorated marquee tent, per the Daily Mail.

Princess Beatrice isn’t finished with the wedding festivities just yet; according to the Daily Mail, the newlyweds want to throw a “huge party” later this year, so they can celebrate with all their friends and family. Perhaps that means that Prince William and Kate Middleton will be able to join with their three children, and depending on the timing (and travel restrictions from the United States), that Prince Harry and Meghan Markle will be able to fly over to the U.K., and maybe even bring Archie.

It’s not clear where the aforementioned party will be, but there’s a chance it’ll be at Royal Lodge once again, just with a larger guest list. That also means there will probably be a new dress for the occasion, though Princess Beatrice definitely managed to go all-out with her wedding dress in her own way, despite the pandemic.

Beatrice broke with recent royal tradition for her wedding dress; instead of wearing a custom creation, like Kate Middleton’s Sarah Burton for Alexander McQueen gown or Meghan Markle’s Clare Waight Keller for Givenchy dress, Beatrice wore a gown loaned by the Queen herself. The taffeta and organza gown, designed by Norman Hartnell, features Duchess satin and diamanté accents, with new sleeves added for Beatrice. The Princess also borrowed the Queen Mary fringe tiara, which Queen Elizabeth wore to her own wedding.

Princess Beatrice and Edoardo don’t have any plans for a honeymoon at the moment; though travel restrictions are easing up in the U.K., they’re still being careful. They might still have a few summer vacation plans, though, as they could visit Queen Elizabeth and Prince Philip at Balmoral Castle, as long as all the proper social distancing and safety protocols are in place. 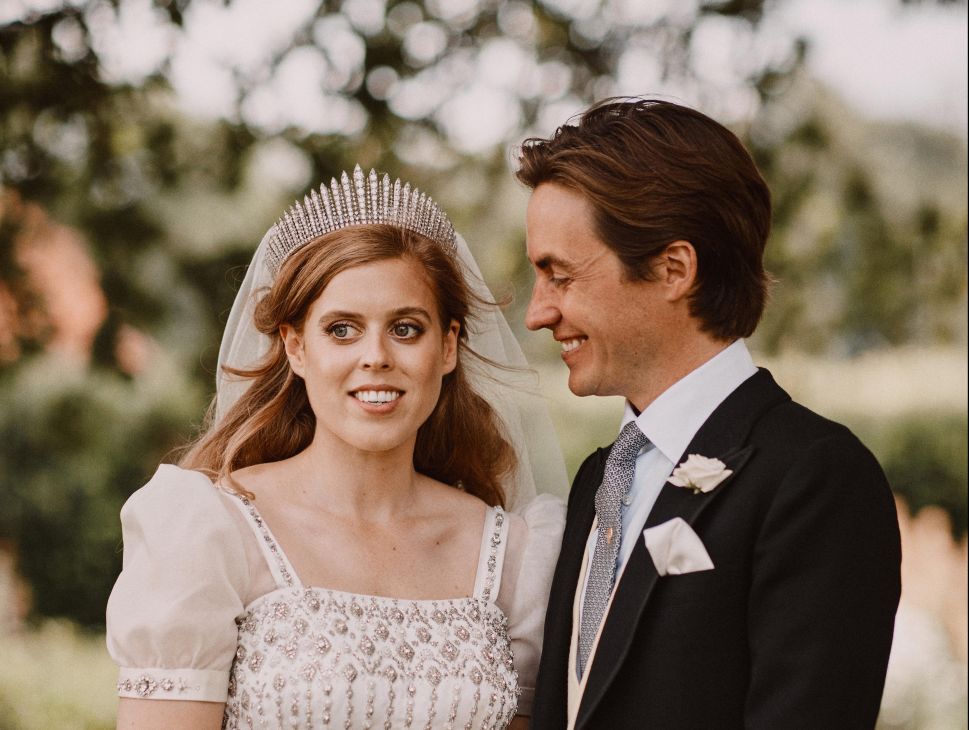