DC Comics has announced a new comic starring Rorschach, the character from Alan Moore and Dave Gibbons’ classic 1986 graphic novel Watchmen. The new 12-issue mini-series by Tom King and Jorge Fornés is almost certainly a bad idea. Alan Moore has repeatedly asked DC not to continue to produce Watchmen content, in part because he believes DC swindled him out of ownership of the property. Moreover, Rorschach died in the original Watchmen comic. As with most zombies, resurrecting him is likely to suck out his soul and make him much dumber.

Rorschach was originally a poor, bullied, fatherless and possibly abused kid named Walter Kovacs. After investigating a terrible child murder, he had a mental break and began to consider his Rorschach mask as his real face. That mask was composed of moving black and white blobs that never met; Moore was taking aim here at comics creator Steve Ditko, an Ayn Rand devotee who insisted morality had no shades of grey.

Moore and Gibbons’ Rorschach was a violent homicidal crank and conspiracy theorist who smelled bad, dined on cold baked beans and fantasized about a just end times in which all the real and imaginary evil doers around him would be swept away in a just reaping. As he famously ranted in the first issue, “The streets are extended gutters and the gutters are full of blood and when the drains finally scab over, all the vermin will drown. The accumulated filth of all their sex and murder will foam up about their waists and all the whores and politicians will look up and shout “Save us!”… and I’ll look down and whisper “No.”

The secret to why Rorschach is a great character, though, is that it turns out that when the actual apocalypse comes, he doesn’t believe in his own Objectivist murder dream. At the end of the series, the billionaire superhero Adrian Veidt/Ozymandias crafts a plot to end the Cold War by teleporting giant, supposedly alien squid into Manhattan, killing millions and uniting the US and USSR against the extraterrestrial threat.

You’d think Rorschach would be pleased that his violent fantasies have come true. But instead he’s horrified. Other heroes decide they need to go along with Veidt’s cover up of his plot in order to preserve the new peace, but Rorschach refuses to participate in genocide denial. He insists he will tell the authorities. The cosmic powered hero Dr. Manhattan confronts him outside Veidt’s Antarctic supervillain lair, and Rorschach removes his mask. In his last moments, he decides to be Kovacs, the scared, abused child, who stands with victims, rather than Rorschach, the angry avatar of vengeance. Kovacs kills Rorschach. Then Dr. Manhattan kills Kovacs.

Rorschach’s self-unmasking is one of the central thematic and ethical lynchpins of the original comics. It’s the moment when even Rorschach realizes that masked vigilantes are morally indefensible. To bring Rorschach back to be a brutal vigilante again—you can’t do that unless you completely misunderstand the original story.

The 2019 Watchmen HBO series helmed by Damon Lindelof very cleverly got around this issue by leaving Kovacs dead in the snow and passing his legacy to a bunch of murderous jerks who don’t know about his final change of heart.

More, the television series, set 30 years after the original, makes explicit aspects of Rorschach’s character that the comic was leery of exploring. Alan Moore made Rorschach a right-wing law and order vigilante enamored of conspiracy theories. But he didn’t address the fact that someone with those fascist views would almost certainly be a racist. The television show, though, deals directly with themes of racism. It insightfully posits that Rorschach’s right wing heirs would be white supremacists opposed to a United States that has grown more antiracist over the decades.

Turning the Rorschach mask into a symbol of outright evil actually reinforces the logic and moral insight of the original comic, in which Kovacs is confronted with the truth of his genocidal daydreams, and repudiates them.

There are few details available as to how the new comic plans to handle Rorschach’s return. It sounds like someone other than Kovacs may have picked up the mask in order to participate in a presidential assassination plot. Writer Tom King says that “It’s an angry work. We’re so angry all the time now. We have to do something with that anger. It’s called Rorschach not because of the character Rorschach, but because what you see in these characters tells you more about yourself than about them.” The tagline reads, “Rorschach may have spoken truth, but he wasn’t a hero.”

It’s not promising when the marketing copy seems to misunderstand the character so thoroughly. The person who spoke truth in the comic, the person who gave his life to bear witness to genocide, wasn’t Rorschach. It was Kovacs. And the anger Rorschach offered, as the TV show makes clear, wasn’t righteous. Maybe the series will be better than the teaser information suggests. But mostly what I see when I look into this particular Rorschach mask is that I am not eager to read this comic. 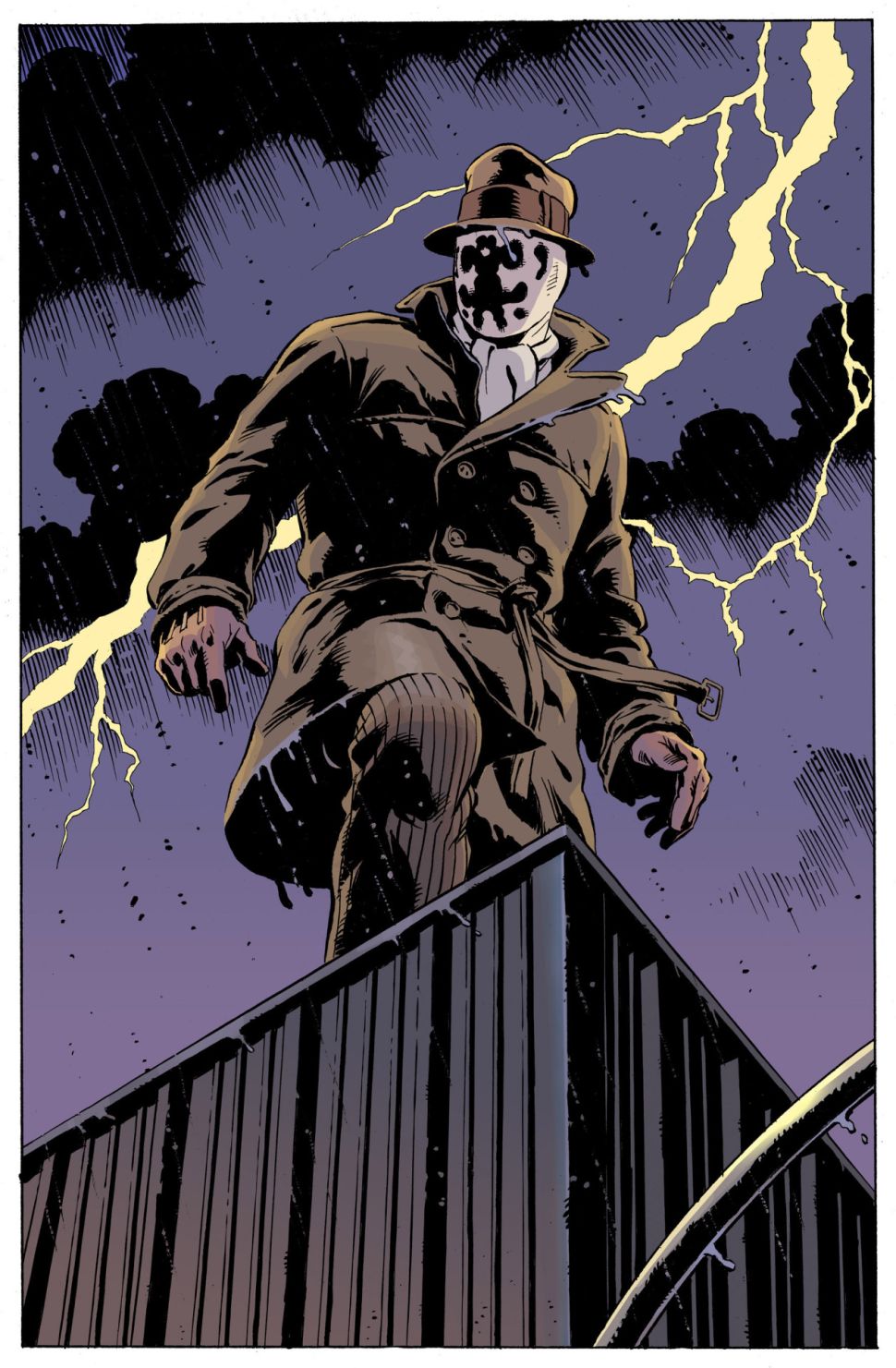