When Rebecca*, a California-based sex worker, first began working on the streets of Los Angeles, it was not uncommon for her to have glass bottles thrown at her by strangers. Using CityXGuide.com, an adult classifieds website, she could advertise for free via a connected Twitter account or for as low as $5 a day otherwise, allowing her to afford to work indoors. It was a life-changing discovery.

Then the Department of Homeland Security seized the classifieds website on June 2nd, throwing Rebecca and countless others into a dangerous uncertainty. CityXGuide’s formerly hot pink and white website was now a blue screen with a perfunctory legal announcement. “CityXGuide.com and affiliated websites have been seized by the department of homeland security.” With the website gone, Rebecca considered possibly hooking up with a pimp again because to her it was better than trying to handle the streets alone.

Rebecca, whose real name will remain anonymous, was one of the many sex workers who found herself using CityXGuide, one of the few low-cost advertisement sites left after leading classifieds site Backpage was seized and shut down by the federal government in April 2018. The site was shut down under the auspices of the federal Travel Act, followed five days later by President Donald Trump’s signing the bill package combining Fight Online Sex Trafficking Act (FOSTA) and the Stop Enabling Sex Trafficking Act (SESTA); together, they form the law known as FOSTA/SESTA, which was passed under the guise of being a crackdown on sex trafficking with bipartisan support.

FOSTA/SESTA effectively amended Section 230 of the 1996 Communications Decency Act, which had allowed for Internet websites to not be held legally liable for what their users post if they break federal law. This had an immediate impact on social networks, which staged a crackdown on expressions of sexuality, nudity, and anything considered “solicitation” in the eyes of the broad sweeping law.

Banning free-to-low priced classified advertisement sites puts workers such as Rebecca at risk to coercive environments and at higher risk of being trafficked. The Backpage takedown combined with FOSTA/SESTA left many sex workers vulnerable. The new laws had an immediate impact. According to a Hacking//Hustling community report, after April 2018, 33.8% of sex workers surveyed reported an increase in violence from clients and 72.45% of online participants reported an increase in economic instability after the seizure of Backpage. And within one month of FOSTA’s enactment, thirteen sex workers were reported missing and two were dead by suicide.

In the same way that Backpage shutting down left sex workers vulnerable, CityXGuide being seized has already had a direct impact on sex workers, who cannot pay for expensive advertisements for their services and forced into more dicey situations.

CityXGuide was one of the sites that became popular in Backpage’s absence, even though CityXGuide’s owner Wilhan Martano bought the domain in 2004. Martano will be the first person tried under FOSTA, for one count of Promotion and Facilitation of Prostitution and Reckless Disregard of Sex Trafficking.

The 2020 American political landscape is different than it was in 2017 when FOSTA/SESTA were passed. If the intention of FOSTA/SESTA was to end sex trafficking, it was a failure, and if its ulterior intention was to subdue the burgeoning sex workers’ rights movement, it was an even greater failure.

In the wake of the attack on sex workers in the United States, a new wave of sex work organizing formed an active political bloc that has quickly influenced public opinion; the majority of voters now supporting decriminalization. The CityXGuide seizure comes during a time in which police and prison abolition have become mainstream topics in the United States, while abolitionists and sex work organizers argue that decriminalization of sex work must be recognized as a necessary step in the liberation of all people.

The laws’ passage prompted the formation of both DecrimNY, an organization focused on decriminalization of the sex trades, and Hacking//Hustling, a sex worker tech collective that organizes around free speech, censorship, and ending deplatforming. The organization Red Canary Song, a Chinese massage parlor worker coalition, formed later that year as a push to achieve justice for Yang Song, a migrant massage parlor worker who was killed when she fell to her death during an NYPD raid in Flushing in November of 2017.

The seizure of CityXGuide has also had international implications. South Korean escort Jina Park tells Observer worried about having used the classifieds site when she was in the United States last. Park intends to eventually emigrate to the US so that she can live with her American boyfriend, but now she worries that her work could impact her future immigration status. It’s a very real concern; since the 2017 raiding of Eros, a more high-end classified site, by Homeland Security non-US sex workers who had used the website before were turned around at the border.

Sex workers have not been alone in their calls for the repeal of FOSTA/SESTA. Last December, Democrats in both the House of Representatives and Senate introduced bills that asked the DHS to look into the consequences of the laws. Sponsors included Rep. Ro Khanna (D-CA) on the House side and Sen. Elizabeth Warren (D-MA) on the Senate side.

For all the focus on those laws, there were other charges with which CityXGuide must contend. CityXGuide was not only indicted under FOSTA for one count of promotion and facilitation of prostitution but also for 17 counts of money laundering, one count of interstate racketeering conspiracy and nine counts of interstate transportation in aid of racketeering. The indictment’s Reckless Disregard of Sex Trafficking charge concerns the case of a 13-year-old Jane Doe in Texas, with law enforcement arguing that even owning the website directly contributes to trafficking regardless of Martano’s lack of direct interaction with the Jane Doe.

The argument that scrubbing the internet of classifieds will end sex trafficking instead of harm sex workers is a misguided one. Trafficking expert Alexandra Levy commented to TechDirt in 2017 that Backpage actually had served as an important tool for law enforcement to spot cases of trafficking, and Backpage even collaborated with the government to identify real cases of trafficking that they found on the platform. According to Levy, “There’s nothing to suggest that Backpage causes them (trafficking victims) to be victimized, but plenty of reason to believe that, without it, they would be much harder to find.”

Decriminalization of sex work would have a massive ripple effect that touches every aspect of a sex worker’s life. Rebecca would seek visitation rights to see her son, as the father has full custody. LA-based worker Carrie Nation says that ending the police stings in her neighborhood would make her work safer and less stressful. Criminalization does not protect workers. Police have been known to pursue workers or rape them as “evidence” of their crimes. The stigmatization that comes with criminalization often leads to sex workers being denied basic rights, such as the right to seek justice, to see their children, or even to just carry condoms in their bag.

Personally, decriminalization would have allowed me to seek justice when a client beat me. I will never receive justice because to even go to authorities to report assault would have been incriminating.

Founder of G.L.I.T.S. (Gays and Lesbians Living in a Transgender Society) and movement leader Ceyenne Doroshow signaled support for the decriminalization movement, while pointing the larger ramifications and items to address in its wake.

“When you decriminalize a law you have to think of the recourse of what’s going to happen to the community after that,” Doroshow tells Observer. “Is the government going to provide jobs and education? Are people going to be able to live in sustainable units? Are our community members still going to go to jail for something else?”

Currently, New Zealand is the only country to fully decriminalize the buying and selling of sex. They country’s model codifies that “sex workers are the best people to advise on their own working conditions, but to allow them to do this there must be a transparent environment in which sex workers can report their experiences without putting themselves or their clients at risk of facing a criminal record.”

Sex workers in New Zealand have been able to apply for aid and receive it during the Covid-19 pandemic. After the Prostitution Reform Act of 2003, sex workers in New Zealand reported a change in police interaction, saying it went from antagonistic to positive. Sex workers said they felt more comfortable reporting violent incidents with clients to the police after decriminalization, according to a 2007 study at the University of Otago.

CityXGuide’s seizure came during a radicalizing time for the American public. There has been a radical shift in public opinion towards the carceral system and police brutality in just a month as a result of the Black Lives Matter protests that followed the police murders of George Floyd, Breonna Taylor, and other Black Americans. Calls for abolishing the police and true equality inherently call for the wholesale decriminalization of not only sex work, but sheer existence. New York State’s Loitering for the Purpose of Prostitution law—known derisively as the “Walking While Trans law”—targets predominantly trans women of color for “soliciting” for simply walking in their neighborhoods.

The seizure of CityXGuide represents a continued attack on sex workers and their survival, a continued criminalization of poverty and bodily autonomy. Sex workers will continue to attempt to navigate a society that stigmatizes them, a government that criminalizes them, and a technology sector that deplatforms them. They will excel in mutual aid because they always have had to and they will continue to organize to protect their communities. In a time of rapid transformation and questioning of police authority, the push to decriminalize sex work is growing every day. 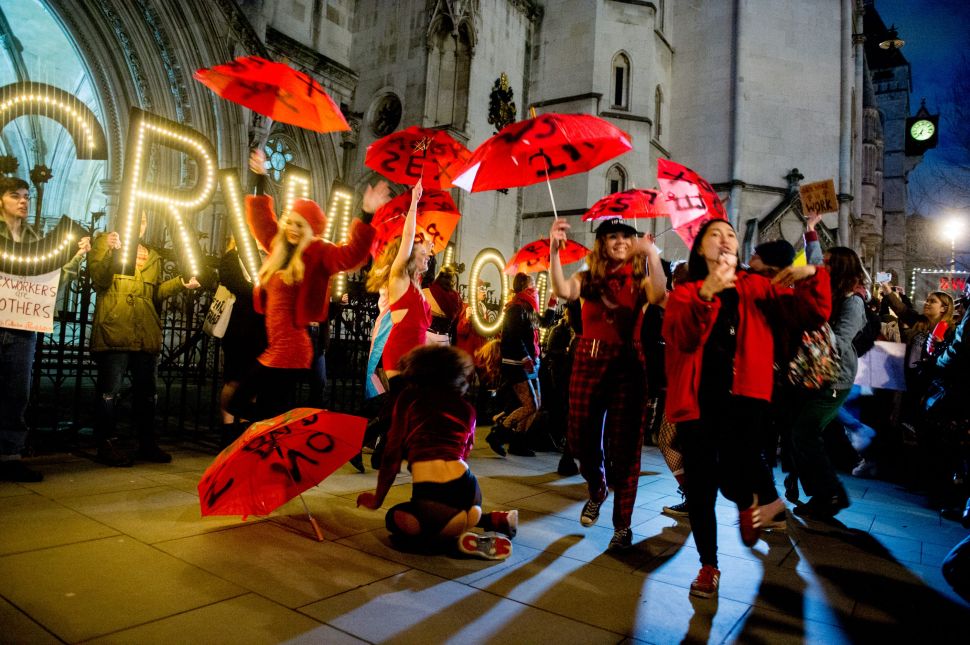