Most galleries and museums employ stringent security measures and safeguards so that artworks won’t be stolen. However, Same gallery in Tokyo recently decided to completely subvert this practice with its recent show “Stealable Art Exhibition,” which was conceived as a commentary on the unequal relationship between artists and spectators. On July 10, the gallery was stripped completely of all staff members, and exhibition attendees were encouraged to take anything they wished from the space, which was set up to remain open 24 hours a day. The only caveats were that new artwork could be stolen during the exhibition’s opening reception, and that the exhibition would end as soon as all the art had been taken. However, things quickly began to get out of control.

SEE ALSO: A Statue of Melania Trump Was Set on Fire in Slovenia

According to the Japan Times, what had originally been conceived as a low-key experiment featuring an array of artwork by Japanese artists such as Gabin Ito, Joji Nakamura and Merge Majurdan quickly devolved into a spectacle as word spread rapidly on social media about the opportunity to collect free stuff. Ultimately, approximately 200 people showed up on the first night the exhibition was opened. As a result, “Stealable Art Exhibition,” which was supposed to be open for 10 days, ended up coming to an end in a matter of minutes. “On the day of the event, there were more people than we expected, so we had to discuss it and open it before the scheduled opening time to avoid confusion on site,” a statement on Same gallery’s website reads. “We would like to sincerely apologize to all the residents in the neighborhood and those who could not see the work despite coming at the scheduled time. This exhibition was not originally designed with the intention of causing such confusion.”

Even in the midst of a pandemic during which large gatherings are being discouraged, enough people showed up to Same gallery’s premises in Tokyo’s Shinagawa Ward complex that local police officers were dispatched to offer crowd control. Furthermore, hours later, works taken from the gallery begun appearing on online auction sites with asking prices as high as 100,000 yen ($930). Same gallery’s exhibition experiment is especially interesting when considered in contrast with the looting that was taking place concurrently with protests in the U.S. earlier in the summer. It seems like regardless of whether stealing is framed as acceptable or a criminal act, people are going to be just as eager to do it. 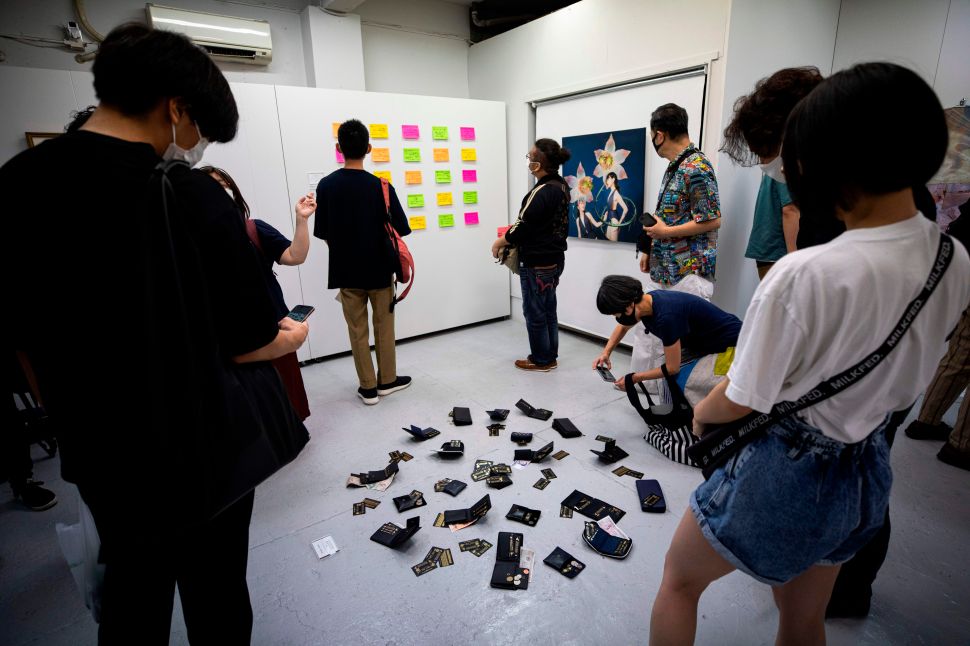