Streaming dominates our world. Ever since Netflix launched its streaming service separate from DVD rentals and started producing original content in the early 2010s, talk of the end of TV as we know it has dominated the entertainment news. Under the current coronavirus pandemic, the dominance of streaming services has only increased, with dramatically fewer new movies and TV debuting in summer 2020. Right now, the biggest source for new content lies with streaming platforms, and with new platforms like Peacock and HBO Max popping up this year to compete with incumbents like Netflix and Hulu, there’s never been as much content readily available.

But though streaming services have been around for over a decade, the main question regarding whether a new streaming service is worth subscribing to usually boils down to the content they provide. Do they have new, original TV shows? Do they offer a substantial library of must-see classics?

But one question that is seldom asked, if ever, is: are there subtitles or audio tracks in a language other than English?

For context, according to the Census Bureau, there are at least 60 million people in the US over 5 years old who can speak a language other than English at home, of which nearly 40 million speak Spanish. Meanwhile, a 2018 report by the Motion Picture Association of America stated that Latinx filmgoers comprised 24% of frequent moviegoers, yet when it comes to the major streaming platforms, the translated dubbing and subtitling options look grim.

Of the major streaming platforms, only Disney+ and Netflix offer non-English subtitles and/or audio tracks for a substantial number of their library titles. Going through Disney+’s library, even their most obscure titles, like Fuzzbucket, Casebusters or The Cat from Outer Space offer the choice of either dubbing or subtitles (some offer only one or the other, but the options are there either-or, but still) in the language of every country in which the streaming platform has launched or is set to launch (from Spanish and French, to Norwegian and Dutch). Hulu only offers Spanish-dubbed versions of a handful of TV shows and movies, as well as Spanish subtitles for all Hulu Originals. AppleTV+ does offer audio and subtitling options in several languages, including German and Spanish, but its library is made almost entirely of original or acquired content, making it substantially smaller than that of Netflix or Hulu.

SEE ALSO: Nearly 1 in 3 U.S. Households Have Cut the Cord, And Sports Won’t Save It

When it comes to the most recently launched streaming platforms, as of this writing, HBO Max offers no choice for subtitles or audio tracks that aren’t in English. At most, the service includes English dubbing on some of their anime content like the Studio Ghibli movies, but not on the HBO series and movies that already available with subtitles and dubbing on other countries’ version of HBO like HBO Latinoamérica, or HBO Nordic like Game of Thrones or Westworld.

In the case of HBO Max, the company chalks up its dearth of options to the quick launch of HBO Max. But things should change sooner rather than later.

“Because of our aggressive timeline to launch, we needed to maintain the existing language support functionality of Warner Media’s technology stack, which powered existing products,” says Andy Forssell, EVP and general manager of WarnerMedia and Direct to Consumer, in a statement provided to Observer. “But with our impending international expansion, we will be able to align our multi-language playback work to deliver more capabilities for our domestic viewers. As we deliver on the significant roadmap of capabilities we’ve laid out for HBO Max, we will add robust language support and deliver UI enhancements that make selecting alternative subtitles and audio tracks intuitive and frictionless for viewers.”

Executive Director for the National Association of Latino Independent Producers, Ben Lopez, thinks that the problem lies in how network and studio executives think about marketing for Latin American compared to the U.S.

“A lot of the specific companies, networks and studios know there’s a hunger for American content in Latin America that has to be either dubbed or subtitled,” Lopez tells Observer. “That’s why HBO has its Latin American division, they invest a lot in carrier deals and satellite deals. But then there’s the marketing or whatever other strategy that you have to look into for U.S.-based Latinos, and they have to take a different approach, and not every executive wants to make that effort. There’s definitely a need to make sure that the majority of the content that is in all the streamers should be subtitled or dubbed into Spanish.”

One roadblock we quickly ran into while researching this article was just how little data or statistics there are regarding subtitles or dubbing availability. If the streaming services don’t track whether people actually use the language options they offer, there is little incentive for the streaming services that don’t offer these choices to start adding language options. Despite numerous reports on the amount of user-consumption-data Netflix tracks and saves, neither Netflix nor Disney+ are willing to open up about the language options in their library titles—or whether they even keep track of them. Representatives from both services refused to comment on whether they are even aware of the options they provide or whether users actually take advantage of these options, despite multiple requests. Not even third-party data firms like Parrot Analytics or ReelGood were able to provide any information on this topic.

The little information these streaming services do provide regarding their language options is limited to short paragraphs on their customer service pages. Disney+’s Help Center only has a short page stating that “For Disney+ original content, subtitles and dubbing will be available in 16 languages by March 2020. For library titles, at least six languages will be available at launch (English, French, Spanish, German, Italian and Dutch)” while Netflix’s Help Center does state that their language choices depend on the viewer’s geographical location. “While streaming Netflix, you typically have 5-7 of the subtitle languages most popular in your region to choose from, and the 2 most popular languages for downloaded titles,” while licensing rights can prevent shows or even seasons of a show to lack subtitles. “Some TV shows may have different sources for each season’s subtitles,” it states. “In some cases, subtitles for seasons that Netflix has offered prior to 2018 may not be available on all devices. If you are seeing subtitles for one season but not another, try using another device to watch your desired season.”

One of the companies in charge of providing the subtitles and dubs to the streaming giants is Producciones Grande, a translation studio based in Mexico that has worked on streaming titles like The Mandalorian, Ghost in the Shell: SAC_2045, The Order, and Netflix’s latest film The Old Guard, starring Charlize Theron. The company’s chief operating officer, Paulina Grande, is all too familiar with the challenges in translating a TV show or movie, as sometimes just saying the words isn’t enough.

“You need to stay loyal to the original script,” Grande says. “Sometimes what they say in English doesn’t match what it should be said in Spanish, so it’s as much about adapting the work as it is translating it, and our adapters need to know about scriptwriting as much as they do languages, because otherwise, you’re only doing half the work.”

Like any other part of the business of making and releasing movies and TV, commissioning that work comes at a cost. But treating translation as an afterthought also comes at the expense of limiting or alienating a large segment of these streaming services’ potential customers, as Grande points out. “Now that streaming has become the number one producer of content, having all these titles in every language means everyone can watch and understand the content, not just a section of the population,” she says.

As more studios launch their own streaming services and start expanding to foreign territories, it becomes even more essential to allow for all users to access and enjoy the content they’re subscribing for. Investing in making these services more accessible isn’t just the right thing to do; it’s common-sense business savvy. The future of these platforms’ success will rely on market penetration in countries around the world.

We all know how big a sensation The Mandalorian became when it launched on Disney+ last year, and that was with the platform available only in the U.S., but would Baby Yoda have become the phenomenon it became had over 20% of the population been unable to watch the show with their loved ones? Would Game of Thrones? As the “streaming wars” rage on, the battle for translated subtitles and audio tracks remains untelevised. 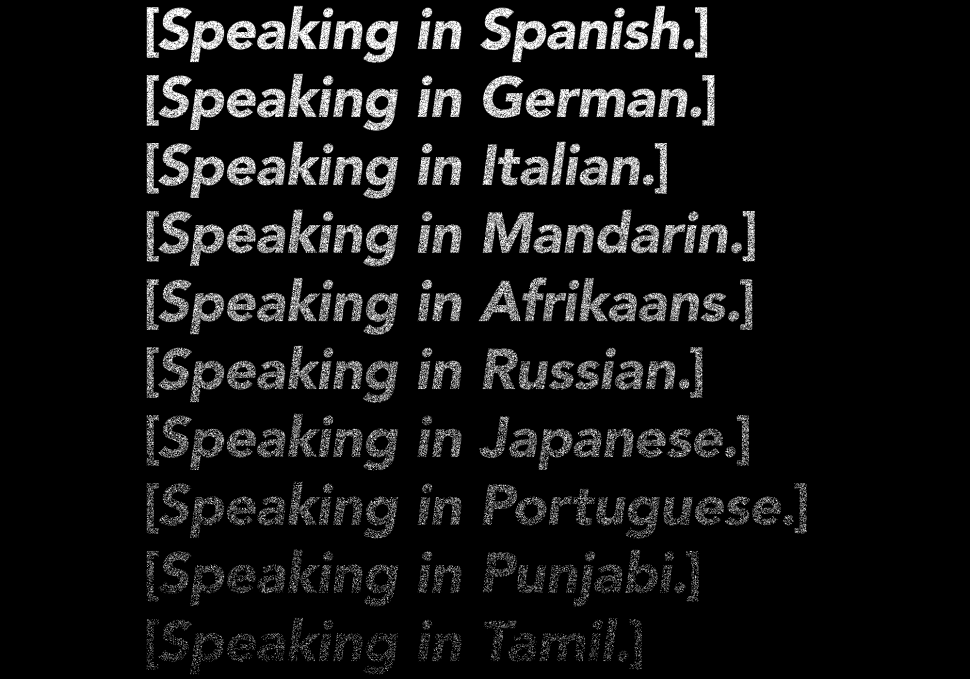