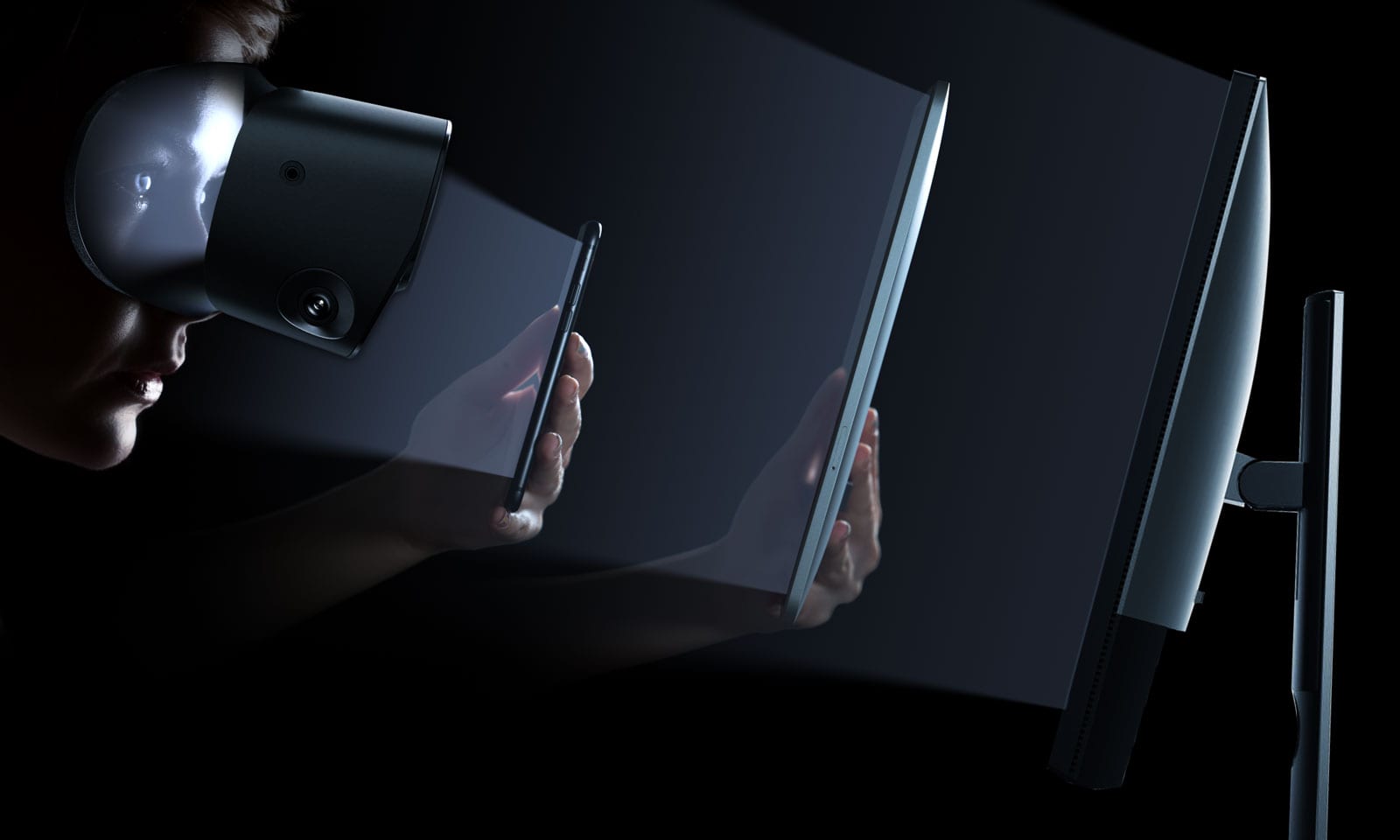 Screens are getting brighter and closer to our eyes than ever before. Motionette

Famed tech-watcher Gene Munster is not one to mince words.

From Wall St. to Silicon Valley, Munster is known as something of a Svengali when identifying long-term trends in tech long before they happen. With a history of bold calls on tech juggernauts such as Facebook, Alphabet and Uber, Munster has a knack for seeing around corners, well before the rest of the market catches on.

His famed 2004 report, “The Apple Option—Predicting Another Revolution,” predicted the resurgence of Apple as the next major force in global tech, years before the first iPhone was unveiled, and at a time when Apple’s share price was trading at less than pre-split equivalent of two dollars a share; sixteen years later, Apple is now the world’s most valuable company with a market cap hovering around one and a half-trillion dollars.

In a recent industry conference call with Asian tech giants, Munster, who now runs his own venture fund called Loup Ventures, unveiled a new set of prophecies in which he laid out what he believes to be the next megatrend in computing: displays. He placed the coming revolution in monitors, screens and “near-eye displays” in the context of some of the most paradigm-shifting movements that have altered the technology landscape in the past 40 years including the emergence of the home PC, the spread of the internet, and the ubiquity of the smartphone. 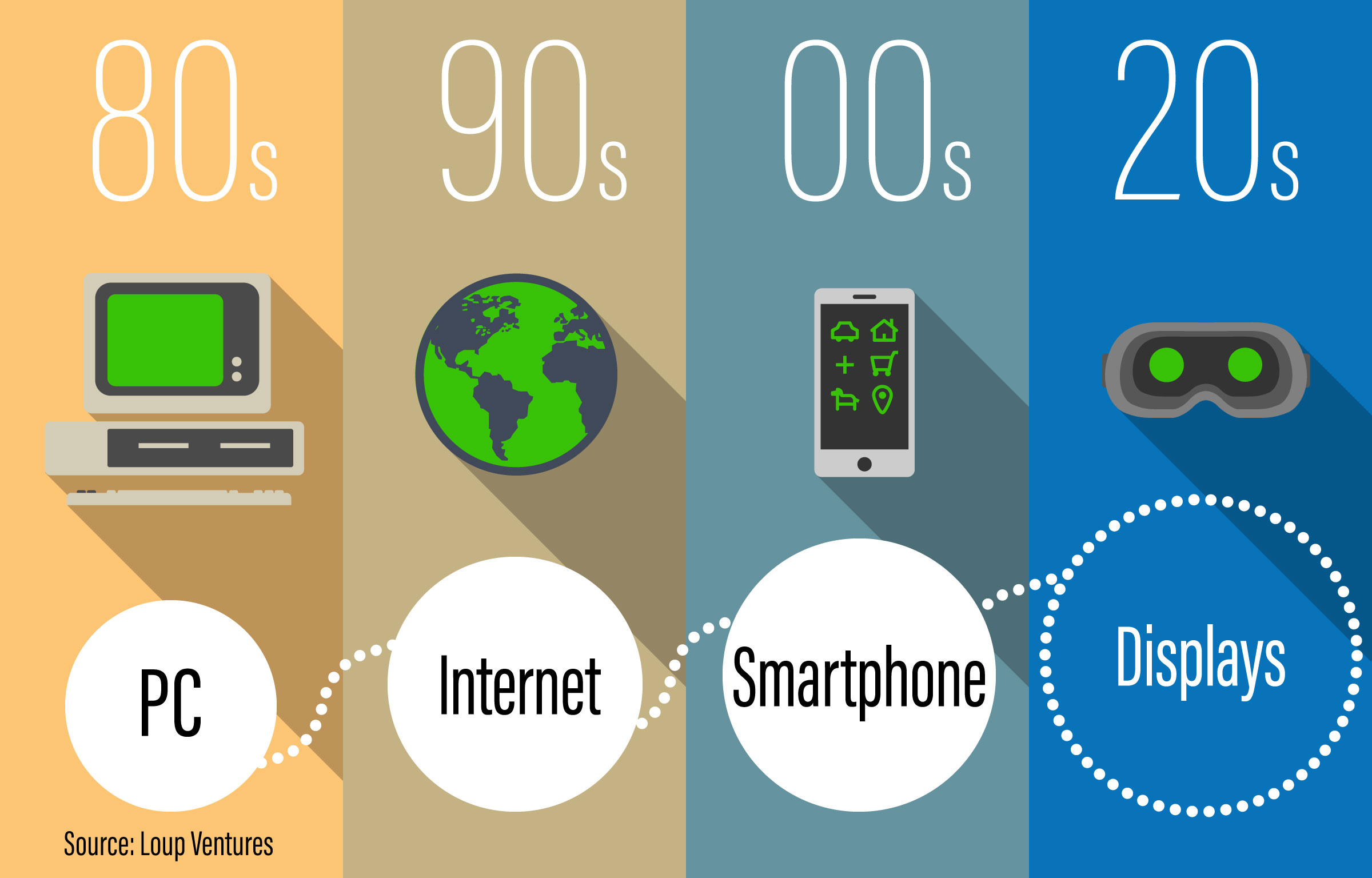 Munster believes that by 2030, there will significant global growth across Augmented Reality, Mixed Reality and Virtual Reality products amounting to 1.3 billion new displays, all of which will sit within one inch of the human eye, a prediction that ripped across global eyecare community with all the subtlety of a bull in a china shop. “The impact of this coming revolution in displays will change everything—how we learn, how we work, even how we interact with one another,” predicted Munster.

Optometrists and ophthalmologists—many already highly concerned with rising levels of screen time and the long-term health impacts on the human eye from extended exposure to the blue light emitted by digital displays—took notice.

“Munster’s predictions set off another alarm across an eye care industry already worried about rising levels of screen time from phones, tablets and PCs,” noted famed Lexington, Kentucky-based optometrist Dr. Paul Karpecki who has been on the front lines in the fight to better educate Americans about the dangers of screen time and create solutions to counter the health impacts of toxic blue light.

“With Covid-19, screen time is already up over 60 percent, and that’s being largely driven by monitors and tablets that are only a few feet from our faces. It will be an imperative that all computer and technology brands begin building preventative solutions into their displays that mitigate the harmful effects of blue light on the human eye.”

The health impacts of excessive exposure to the dangers of blue light have been well-documented. Although this frequency of light when emitted from natural sources such as the sun has some positive effects, in excessive doses, like those emitted from digital displays, it can pose myriad health risks. A 2018 paper from the Harvard Medical School asserted that blue light has a decidedly “dark side,” and can be linked to macular degeneration, heightened eyestrain, dry eye, eye fatigue, blurred vision, sleep disruption and migraines.

“In simple terms, blue light, in excessive quantities, is dangerous. In a developed and connected modern society, we can’t realistically stay away from it, so we need to build solutions that manage and filter it,” added Karpecki.

Since the onset of the coronavirus pandemic, with Americans swapping in-person meetings for Zoom chats and students relying on remote learning, top eyecare experts have begun to step up their warnings about the imposing dangers of increased screen time on our eyes; tech insiders, meanwhile, are sensing the opening of a new multi-billion dollar market for low blue light products and technologies. 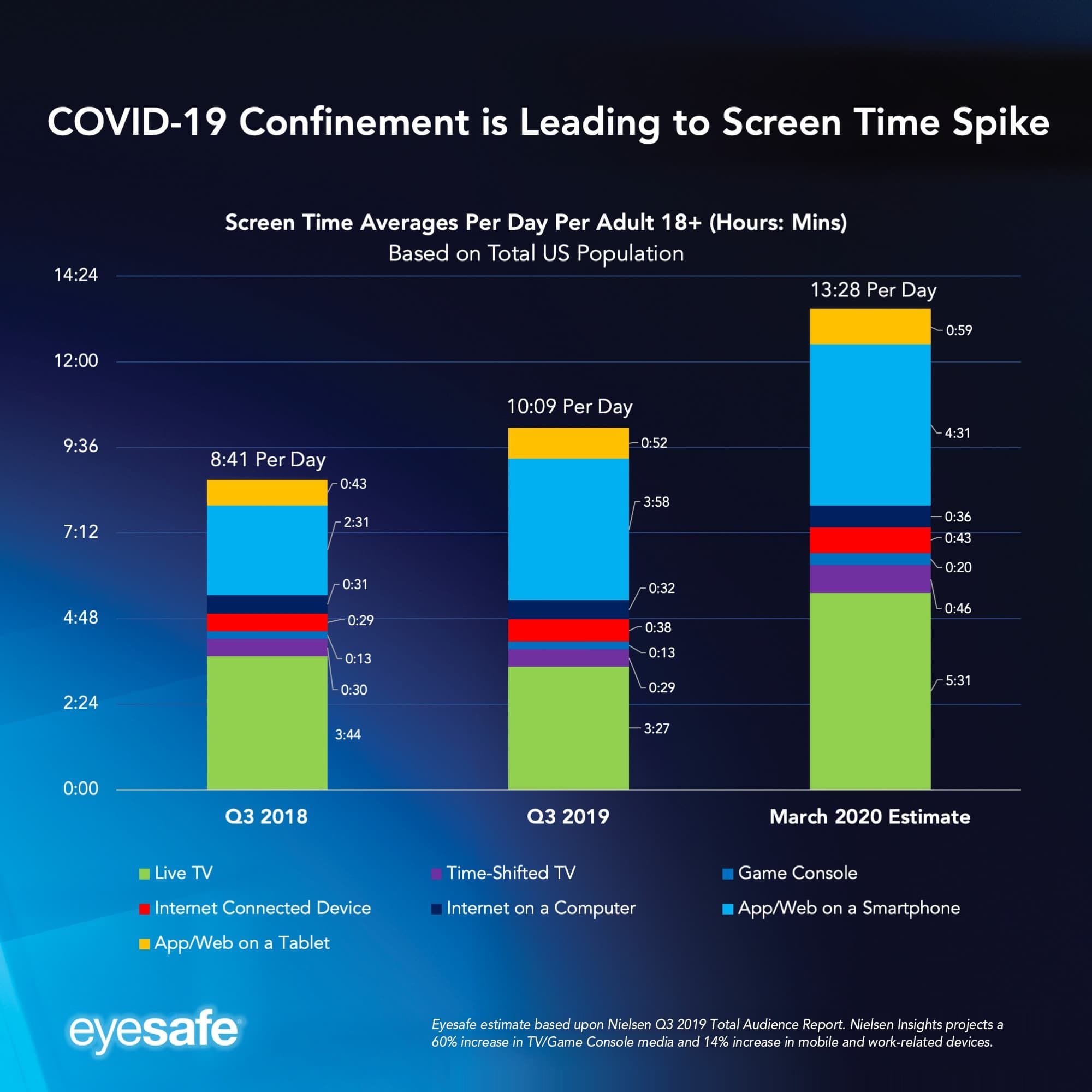 Average screen time has been on a steady march upward in recent years, and the Coronavirus pandemic which forced much of work and learning online, has only exacerbated the issue. Nielsen/Eyesafe

Dr. David Friess, a Philadelphia-based optometrist who leads the Vision Health Advisory Board, an international group of leading optometrists and ophthalmologists concerned about the impact of screen time and blue light on the human eye, agrees with Karpecki, but sees this moment as one of caution.

“Screens are getting brighter and increasingly closer to the human eye, and with COVID, we are developing habits that suggest that we will be on screens a lot more going forward—even after the pandemic has dissipated,” observed Friess. “I think there is an inherent understanding by many people that all this screen time cannot be healthy; yet, while the public senses a need to protect themselves, there is still a lot of misinformation out there.

“There are lots of purported solutions—such as some of the ‘blue light blocker’ glasses available online and other places—that may have varying blocking effects or significantly degrade the image quality of screen images. Consumers are confused about what works and what doesn’t, which is why the eyecare community has been increasingly vocal about establishing a set of doctor-endorsed standards for technologies that claim to filter high-energy blue light. The computer and digital display industries need a universal standard that is presented in a way that every consumer can easily understand,” he added.

“This is a landmark moment in the global display industry,” commented Kalyan Varma, the Shanghai-based executive who oversees the display certification programs at TÜV Rheinland. “The Eyesafe Display Standard is the only of its kind backed by research from healthcare and endorsed by leading ophthalmologists and optometrists worldwide.”

Industry insiders across healthcare and the tech world are cautiously optimistic that the Eyesafe mark can finally bring some order and clarity to a consumer electronics industry that is shifting to build blue light blocking features into the actual hardware.

“As screens come closer and closer to the eye, ‘blue light blocker’ glasses will not serve as a good long-term solution. Right now, a few select brands have begun building in blue light filtration hardware inside the display, and that is the way the industry is definitely going,” commented Barb Stinnett, the Managing Director of Timmaron Group, a Silicon Valley-based healthcare and technology advisory firm, which consults for industry heavyweights such as Amazon, UnitedHealth Group, and IBM. “We expect the entire industry supply chain—from manufacturers, to integrators, to consumer brands—to rally around a single set of standards, much like they did years ago with the Energy Star program.”

But unlike Energy Star, which began in the early 1990s as a program sponsored by the EPA to promote energy efficiency, what Stinnett is advocating effectively amounts to an industry-led initiative. “We are encouraging leading consumer brands such as Dell, HP, Lenovo and others to rally around the TÜV Rheinland Eyesafe Display standard. Consumers desperately need clarity,” added Stinnett.

What Stinnett and many of her colleagues in Silicon Valley are wary of is that the technology sector drags its feet until the point that the government steps in and begins regulating blue light emissions with top-down legislation; already there have been some rumblings. Last October, by unanimous vote, the California State Legislature passed SCR 73, a first of its kind resolution in the US, that highlighted the health risks associated with exposure to blue light.

Dell has been the first of the major global tech brands to roll out the Eyesafe certification standard on its premium lines of laptops including its high-end gaming Alienware platform and it has plans to extend the program across its industry-leading monitors business.

“Blue light filters on computers will soon be like seat belts in cars – there will be a point in a year or two when we cannot imagine using a monitor, laptop, or smartphone without blue light filtering built into the device,” commented Ethan Bearman, an on-air analyst for Fox Business News who has been vocal about the dangers of blue light from digital displays. “We are well beyond the question of ‘if’—now it’s just about how fast the medical and technology sectors can agree upon a set of safety standards that John Q. Public can easily understand.”

As displays get closer and closer to the eye, it’s clear that tech companies will have to become increasingly proactive in addressing consumer health concerns, an area they have traditionally shied away from due to liability issues. But what many industry experts agree on is that with the screen time habits that Covid-19 has forcefully instilled in consumers, coupled with a revolution in display that will bring them ever closer to our eyes, computer brands will need to address concerns about the health impacts of blue light head-on.

To many eye care professionals, one of the many long-tail health impacts of COVID-19 will be on our eyes, and it will be up to the consumer electronics industry to rise to the occasion, lest regulators and lawmakers beat them to the punch. 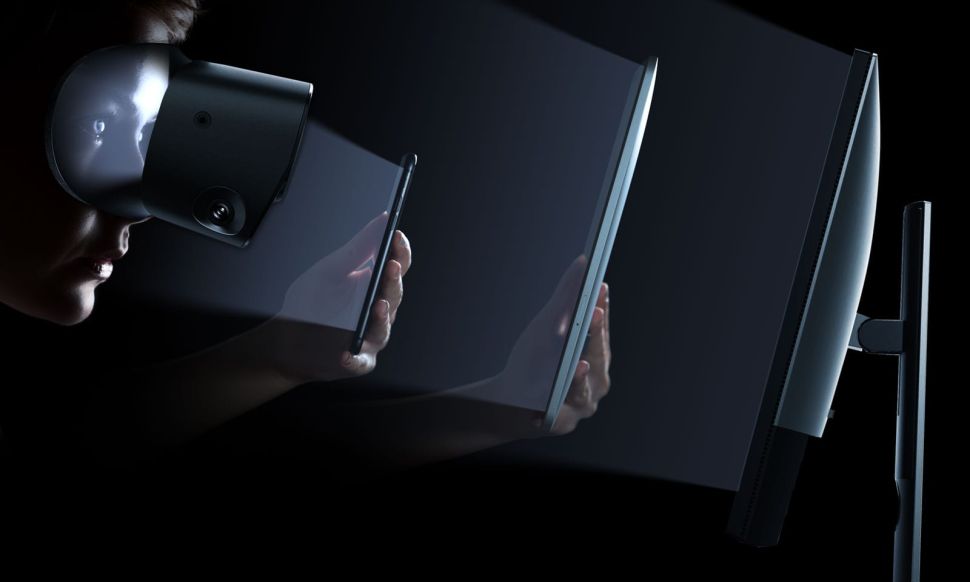