With August’s arrival in the Northern Hemisphere, we find ourselves officially in the dog days of summer. Named for the time of year when Sirius, or the dog star, appears to rise just before the sun (coinciding with the hottest days of the year), this phrase for me conjures less an astrological phenomenon and more a suggestion: to spend this month like my pup, Yogi, who can be found sprawled out on a couch or bed for at least 23 hours each day. And publishers have no shortage of releases to fill lazy days with substance. From a psychological journey charting one woman’s attempt to escape through sex and alcohol, to the conclusion of a series explaining the rise of conservatism in America, this is a month of book releases that are prepared to tackle humanity’s complex and questionable choices.

This debut novel from recent NYU MFA grad Ravel Leilani follows Edie, a young, Black, Bushwick resident navigating many of the obstacles facing 20-somethings: a bad apartment situation, a low-paying job. But she harbors a desire to create art. When she meets Eric, a white digital archivist with a wife and family in New Jersey, she finds herself pulled into their suburban life, and their open marriage. Described as a dark comedy, it’s already won praise from the likes of Carmen Maria Machado and Zadie Smith, who pronounced Leilani’s prose “Exacting, hilarious, and deadly…A writer of exhilarating freedom and daring.”

Author of 2018’s acclaimed novel Freshwater, Akwaeke Emezi has been hard at work developing that debut book into a TV series with FX, serving as both writer and a producer. And Pet, their 2019 release, was shortlisted for a National Book Award for Young People’s Literature. Around this, Emezi has found time to pen a sophomore release for adult readers: The Death of Vivek Oji. Set in Nigeria, where Emezi was born and raised, it tells the story of a family losing a son, and the journey of discovering that titular character’s truth.

Jessica Gross’ debut introduces us to an unnamed, complicated leading lady searching for escape in the wrong places. In the midst of a drinking binge, she comes to the conclusion that the new bartender serving at her local is, in fact, Sigmund Freud—and he might be the key to unraveling her Oedipal issues. A psychological tale that’s at turns comedic and painfully raw unfolds. Parakeet author Marie-Helene Bertino describes Gross’ writing as, “So intimate I felt like I was eavesdropping, a debut that is from page one as compelling and breathless as the sex bender it details.”

From the author of Before the Storm: Barry Goldwater and the Unmaking of the American Consensus, Nixonland, and The Invisible Bridge: The Fall of Nixon and the Rise of Reagan, Rick Perlstein brings his series on the rise of conservatism in the U.S. to a conclusion with Reaganland. Examining the four years before Reagan took office, this volume pinpoints what led the country to elect the first man to run with the slogan “Make America Great Again,” and the ruthless political tactics devised to secure his win that endure to this day.

A thriller set on a Native American reservation where one man, Virgil Wounded Horse, determines to deliver justice to those who have wreaked havoc on his community, this first novel from David Heska Wanbli Weiden heralds a brave new voice in the genre of crime fiction. Delivering a gripping plot alongside an informed, detailed perspective of issues facing Native American communities, early readers are already hoping this will be the first in a series set on the Rosebud Reservation. 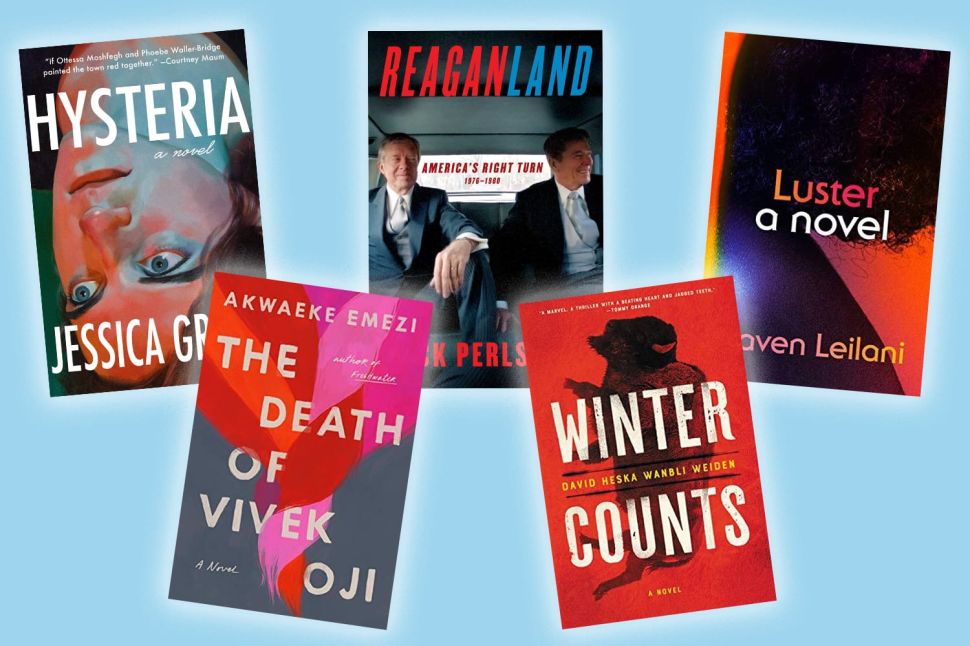