Barbara Hepworth, the influential sculptor who’s the subject of a new Google Doodle, is being honored today not for the date of her birth or other well-noted milestone, but rather it was on August 25 in 1939 that Hepworth arrived in St. Ives. Seeking refuge from the war, it was here that Hepworth her partner, Ben Nicholson, would find a community of artists who were able to create despite the havoc of the conflict brewing around them. Together they founded the Penwith Society of Arts with 19 other creatives who were living in the seaside town. Primarily, though, Hepworth is known for her remarkable innovations in the art of sculpture. She helped to pioneer a technique called “direct carving” wherein an artist approaches manipulating raw material instinctually, rather than acting with a prepared model.

It wasn’t that Hepworth had no formal training; quite the opposite. The artist was educated at the Leeds School of Art and the Royal College of Art in London, and she was able to distill her vast knowledge thoroughly enough in order to give herself over to abstraction. Hepworth’s largest, most monumental work ever served as a perfect example of her technique. Entitled Single Form, the artist’s massive bronze sculpture was crafted with her deceased friend Dag Hammarskjöld in mind. Hammarskjöld was the former U.N. secretary-general, and so Single Form was erected in May 1964 in front of the United Nations Building in New York City. The sculpture, which stands 21 feet tall, brings to mind the monolithic, mystical rocks that make up Stonehenge. However, Hepworth has punched a hole through the top of the figure so that it appears to be staring out at the world; an observer standing sentry.

SEE ALSO: Pacita Abad, a Painter of Women Around the World, Celebrated With a Google Doodle 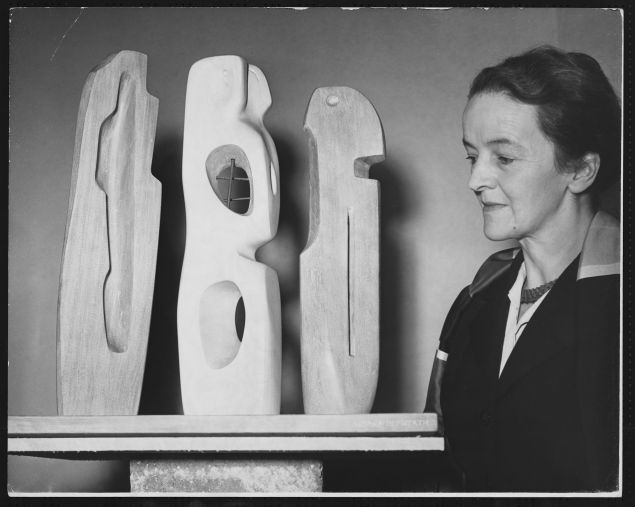 Barbara Hepworth with her prize-winning model of ‘The Unknown Political Prsioner’ at the Tate Gallery in London, 1953. © Hulton-Deutsch Collection/CORBIS/Corbis via Getty Images

“One of Hepworth’s quotes was ‘I draw what I feel in my body,'” Matt Cruickshank, the artist who created today’s Google Doodle, told Google in an interview. “This is so prolific. She approached subjects with great classical knowledge and training. These tools gave her the base with which to nurture her ultimate skill: instinct.” In Cruickshank’s Doodle, a GIF of Hepworth perpetually hammers away at a curved sculpture, looking perfectly content.