The Beit Guvrin caves in southern Israel have been used for lots of things over the past 2,000 years—but never as art exhibition space. Until now. In their over two millennia of existence, this network of underground grottoes has been used to breed doves, as stables, burial grounds, cisterns, homes, baths and places to press olives and grapes.

The 1,250-acre national park protecting this subterranean labyrinth is just a one-hour drive from the Tel Aviv apartment of Ivo Bisignano, a multimedia artist and former fashion editor at Vogue Italy. Even so, he’d never gone there until the fall of 2019. “When I went inside for the first time,” Bisignano tells Observer, “it was like my skin went crazy.”

The hundreds of caves are both natural and manmade—an ancient wonder that qualified for UNESCO World Heritage Site status in 2014 because of its use over an extended historic period, and near-immaculate preservation.

Bisignano was impressed by the history of these caves, which date back to at least 500 BCE and were used by Jews, Romans and Byzantines. But he also thought they’d be a perfect home for the wooden sculptures he was working on. He imagined the feet of his sculpted human figures standing on the dirt floor, with sunlight streaming in and casting playful shadows throughout the day.

“The archaeological nature of the setting—the layers created by millennia of activity—is the perfect counterpart to his wooden figures,” writes Israeli-British chef and restaurateur Yotam Ottolenghi in the exhibition catalogue. “Both live in and out of time; both are man-made and nature-made at the same time.”

Bisignano made the first of these wooden sculptures in September 2019, after he found an abandoned wood table on the curb and decided to reinvent it. Inspired by forms like Leonardo da Vinci’s Vitruvian Man and the modernist shapes of architect Le Corbusier, before long he had created a small tribe of what he now calls Human Forms.

“I want these human forms to be completely comfortable in this cave,” Bisignano says. “Caves were the first place art was created in.”

The sculptures were ready and the caves were perfect. He just needed to convince the Israeli Nature and Parks Authority to allow him to host larger than life-sized artworks in one of the caverns and project video art onto the walls. “They never have art, so when I arrived they looked at me like I was crazy,” he recalls. This would be a first for Beit Guvrin, a place that has already seen so much.

As Bisignano spoke with the park authorities, they understood that he didn’t want to transform or damage the caves in any way. The caves would actually be a sort of visual extension of his sculptures, with the same earth tones and curvature. They also understood that an art exhibition could bring new audiences to this old, dusty by definition place. The park said yes.

They suggested Bisignano use a grotto called the Bell Cave. But then a chunk of its 80-foot tall ceiling collapsed, putting the project on and indefinite hold.

But a little while later, in February, the park called Bisignano back to say they found an alternative. “’We have this cave where the engineer and geologist checked, it’s ready and we haven’t opened it for 25 years,’” Bisignano recalls of the conversation. “If the other cave was like a church, this was like a cathedral. It’s [120 feet] high and double the space.”

He got back to work, imagining more sculptures populating a bigger cave. But then yet another natural phenomenon delayed the project—the onset of the coronavirus pandemic. Bisignano continued working on his human forms while under lockdown, living with the massive wooden sculptures in his apartment-slash-studio.

As the coronavirus lockdown dragged on, it actually strengthened Bisignano’s resolve that the caves were the best place to host this exhibition. As the future of many museums and art galleries remained unclear, this visually stunning open-air park just happened to be ideal for ventilated and socially distanced viewing.

And so this month, after a cave caved in and a pandemic shook the world, Bisignano’s Human Forms will open to the public as of August 8 for two months. Reservations are required, walking shoes are recommended. The caves have never hosted anything like this before.

“In this moment it’s not just only a cave,” Bisignano explains. “It’s our cave, hashtag-our-cave-I-don’t-know-what. But it’s a new space because there is life inside, so it becomes something else.” 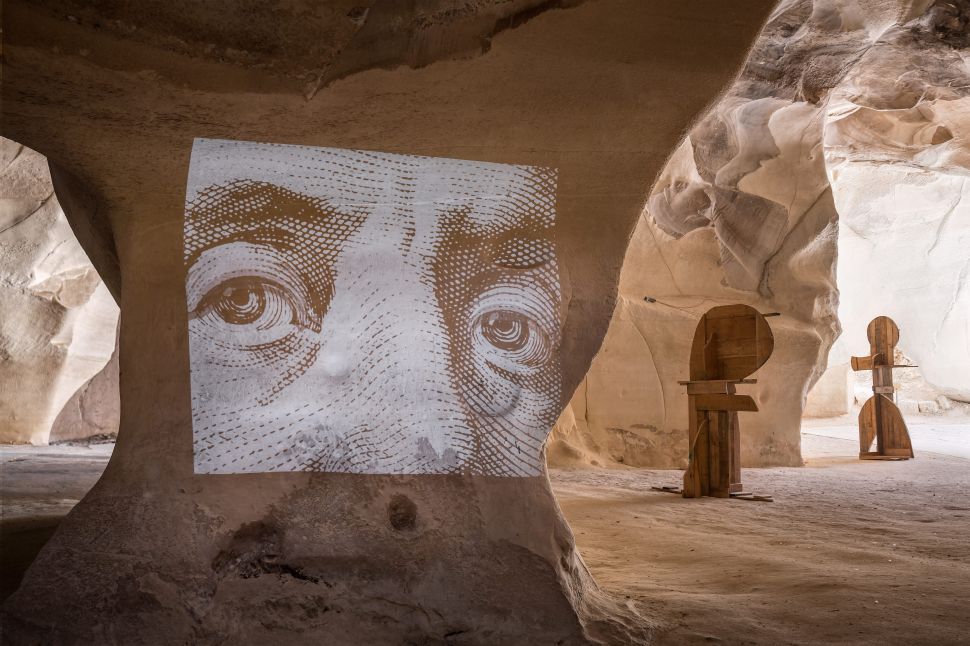