ViacomCBS is planning to relaunch its streaming platform, CBS All Access, in 2021 as a “super service” to better compete with the Netflixes and Disneys of the world. But, that doesn’t mean there isn’t already a strong library of worthy candidates for your viewing attention. In recent years, All Access has built itself around new small screen Star Trek series as well as Jordan Peele’s revival of The Twilight Zone. But there are also a handful of quality films that can help fill your days. Let’s be honest, we’ve all got nothing but time on our hands as the pandemic stretches ever onward.

Rather than run through a list of the biggest and most obvious blockbusters, we’ve unearthed CBS All Access’ hidden gems. The films that flopped at the box office but are deserving of a second chance on streaming. It’s a mix of golden oldie classics and more contemporary misfires that all went unappreciated in their times.

Be sure to check out similar lists for Amazon Prime Video, Netflix, Disney+, Hulu, Peacock, and HBO Max. Each title below is linked to its CBS All Access page, for your bingeing convenience.

Critics fawn over Zodiac and I’m no exception, though Seven, Fight Club and The Social Network are probably the “sexier” selections among director David Fincher’s filmography. But it is this reimagining of America’s most infamous serial killer that is the filmmaker’s most complete movie. At a hefty two hours and 42 minutes, Zodiac isn’t exactly an easy watch. But it is never dull in its length and its stillness should not be mistaken for apathy of lethargy. This is a devastating cinematic creation. Watch it on CBS All Access.

A father discovers that his 7-year-old son Josh is a chess prodigy and soon falls under the tutelage of a speed chess hustler and a famous traditional coach. But between the conflicting methods and stress of competition, Josh learns that even a chess prodigy cannot always make the right moves. Searching for Bobby Fischer is an absorbing feel-good drama written and directed by the talented Steve Zaillian, who has penned such hits as The Irishman, HBO’s The Night Of, Fincher’s The Girl with the Dragon Tattoo and Steven Spielberg’s Schindler’s List. So, yeah, the guy knows how tell a story. Watch it on CBS All Access.

Jay and Silent Bob Strike Back

Rude, crude, and completely classless—Jay and Silent Bob Strike Back still managed to charmingly influence an entire generation of millennials with its fire hose vulgarity. Writer-director Kevin Smith stuffs in just about every running gag from his View Askewniverse, riding references, callbacks and cameos all the way to a surprisingly comedic destination. As ridiculous as the film may be, its lunacy is matched only by its quote-ability. Snoogins. Watch it on CBS All Access.

A Night at the Roxbury

Another looked down upon comedy that inspired a generation of kids of a certain age, A Night at the Roxbury may not be SNL‘s best sketch-to-screen film adaptation (shout out to Wayne’s World). But it is most certainly one of the brand’s funniest. Early career Will Ferrell shows off his future movie star chops with comedic gusto and the thinnest of concepts capably supports a feature length film. By the end of this flick, you too will be asking “What is love?” Watch it on CBS All Access.

Once Upon a Time in the West

There’s a very good reason that John Wick director Chad Stahelski told Observer that Once Upon a Time in the West is home to his favorite all-time cinematic action scene. You just can’t top the classics, folks. Watch it on CBS All Access.

Is John Carpenter’s Escape From L.A. a particularly good movie? No, not really. It’s more or less a plodding sequel to the cult classic that preceded it. But is John Carpenter’s Escape From L.A. a perfectly fun-enough action flick for a sunny Saturday day drink? Yes, yes it is. This time around, Kurt Russell’s eye-patched protagonist must wade into Los Angeles following a devastating 9.6 earthquake to retrieve a doomsday device. Snake Plissken approves. Watch it on CBS All Access.

Seven young girls and their friendships are put to the test by budding romance, annoying neighbors and scheming snobs. Based on the popular book series, The Baby Sitters Club provides an enchanting and colorful snapshot of female friendship in this pleasant coming of age tale. Earlier this year, Netflix even revived the property with a TV adaptation. How’s that for staying power? Watch it on CBS All Access.

Confessions of a Dangerous Mind

George Clooney’s feature directorial debut is appropriately turn of the century. It follows Chuck Barris, young, energetic, and focused on a top career in the growing television industry (lol, 2000), who finds himself being followed by a suspicious character who quickly lures him into a secretive and dangerous world: that of a CIA operative. While Barris gains notoriety as a dynamic television producer, he regularly executes assassinations for the United States government. As ratings rise, his life begins to spiral out of control when he finds himself marked for death by an operative.

Clooney hasn’t directed a great movie in awhile, so here’s to hoping his next effort behind the camera—The Boys in the Boat—can match Confessions of a Dangerous Mind. Watch it on CBS All Access.

Critics have always snubbed their noses at Chris Rock’s features, but the hate has gone too far. One of the funniest comedians of the last 25 years is, unsurprisingly, very funny in this decent enough remake. Down to Earth is a romantic comedy that follows a man who gets a second chance at life and love. Struggling black comic Lance Barton (Rock) knows what it’s like to die on stage. But when his life takes an unexpected turn—straight to heaven—Lance is sure there’s been a mistake. Soon, he finds himself reincarnated in the aged body of a ruthless white billionaire. Hi-jinx ensure. Watch it on CBS All Access.

A vibrantly colorful action satire, 1987’s The Running Man arrived in between Predator and Twins for star Arnold Schwarzenegger, which partly explains why it’s been buried by history. The other reason is that it’s patently ridiculous, but not so out there that it isn’t enjoyable. The film takes place in 2019 (yikes) when America has become a totalitarian society that sends its accused criminals to fight for their innocence in a violent game show called “The Running Man.” Framed for a crime he didn’t commit, Schwarzenegger’s hero must win his freedom and tear down the system of oppression. Basically, everyone wears weird costumes and plays a deadly game of American Gladiator for reality TV. Watch it on CBS All Access. 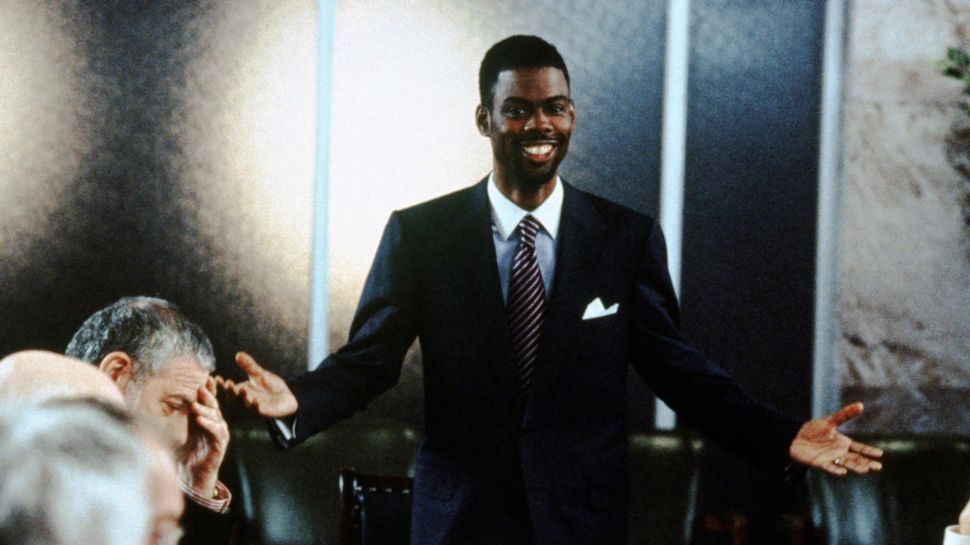