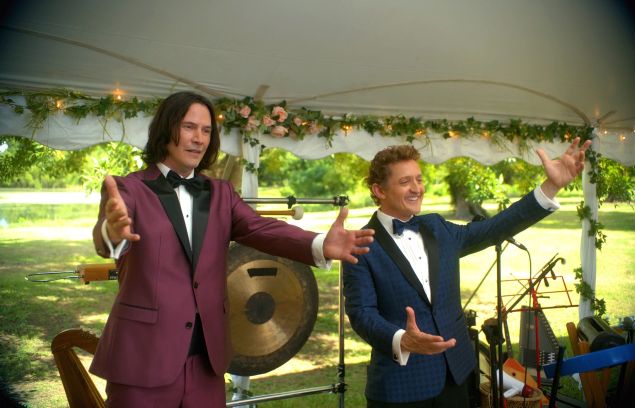 Can one glide by on good vibes alone? Might a wholesome message about unity and the power of music effectively pave over a manic movie’s paucity of laughs and thin story? Can the union between two characters and the actors who play them be so profoundly bodacious that it transforms an endeavor’s cynical intentions into something pure-hearted—righteous even?

Judging from Bill & Ted Face the Music, the third in a trilogy that last graced movie theaters during the final days of the Soviet Union, the answer swirls in the nebula between “most definitely” and “just barely.”

What the movie proves definitively is just what a durable vehicle screenwriters Chris Matheson and Ed Solomon stumbled onto when they first created the Candide-like Valley metalheads as UCLA undergrads. In addition to the three films, William S. Preston, Esq. and Theodore Logan have served as the basis for a cartoon, a live-action series, comic books from both DC and Marvel, a short-lived breakfast cereal, several video games and a long-running theme park ride.

That they have been able to do all of that without ever seeming to overexploit a good thing is most certainly due to the two most important ancillary products to spin out of the Bill & Ted franchise: the friendship between the screenwriters who have guided all three of their big screen adventures and—perhaps most profoundly—the one between Alex Winter and Keanu Reeves, the men who play them.

In an age when so many of us are drowning in isolation and a culture that is still learning how to represent intimacy between male friends, the profound bond shared by the characters—and that Reeves and Winter so tangibly express towards each other—turns out to be the Face the Music’s primary and most powerful selling point. It’s quite nearly its only one.

The movie is full of manic activity—so much running and zipping about that quite literally goes nowhere—when all you really want is a chance to have an extended bro-down with the most excellent Bill and Ted.

But instead of burrowing in on the warm comfort of their brotherly affection, the film, directed by series newcomer Dean Parisot (1999’s Galaxy Quest) has a furious and un-involving plot it must attend to. In order to come up with a song that will “save reality as we know it” (a task they had failed to accomplish over the previous quarter century), Bill and Ted blast into the future, not far from San Dimas, to steal the tune from various iterations of their future selves, some of whom have become “contentious dickweeds.”

The more traditional Bill and Ted task of traveling through time and collecting historical figures falls to their daughters, Thea Preston (Samara Weaving from last year’s Ready or Not) and Billie Logan (Brigette Lundy-Paine from the Netflix series Atypical).

The younger pair is meant to share the same uncommon bond—as well as personality, mannerisms, and names—of their fathers. It’s a cute contrivance, but it feels both like a shortcut that allows the screenwriters to avoid writing the talented actors their own characters, as well as an all too obvious way for producers to pass the franchise on to the next generation. There is also something about the suburban teenagers’ main purpose in the story—to aid their dads by recruiting musical geniuses of the past like Jimi Hendrix and Louis Armstrong (played by DazMann Still and Jeremiah Craft respectively)—that borders uncomfortably on cultural appropriation.

The film begins to find its rhythm toward the end, when it finally carves out space in its fevered plotting for a little character development. What results are inspired comic flourishes featuring Death (William Sadler, returning to the character after Bill & Ted’s Bogus Journey) who is both the reaper of souls and the insecure bass player who was kicked out of the guys’ band the Wyld Stallyns years before, and Dennis (Anthony Carrigan, NoHo Hank from HBO’s Barry), a murderous robot who harbors a secret desire to be more artistic.

Both characters so ably and easily embody the relaxed, goofy aura one expects to emanate from any creative endeavor with the Bill & Ted imprimatur. But in doing so, they call attention to the fact that this kind of genuinely inspired silliness has been largely AWOL in the hopped-up film that preceded their late-game emergence.

Or rather, we only caught glimpses of it.

They came in fleeting glances, befuddled smiles and odd-timed pauses that the iconic pair share with each other before the movie shuffles them from one frenzied and inconsequential story beat to the next. In such stolen moments, you sense the depth of a friendship so profoundly felt and so deeply comforting that you think to yourself, I would follow these guys anywhere.

Bill & Ted Face the Music will be available on demand and in theaters August 28. 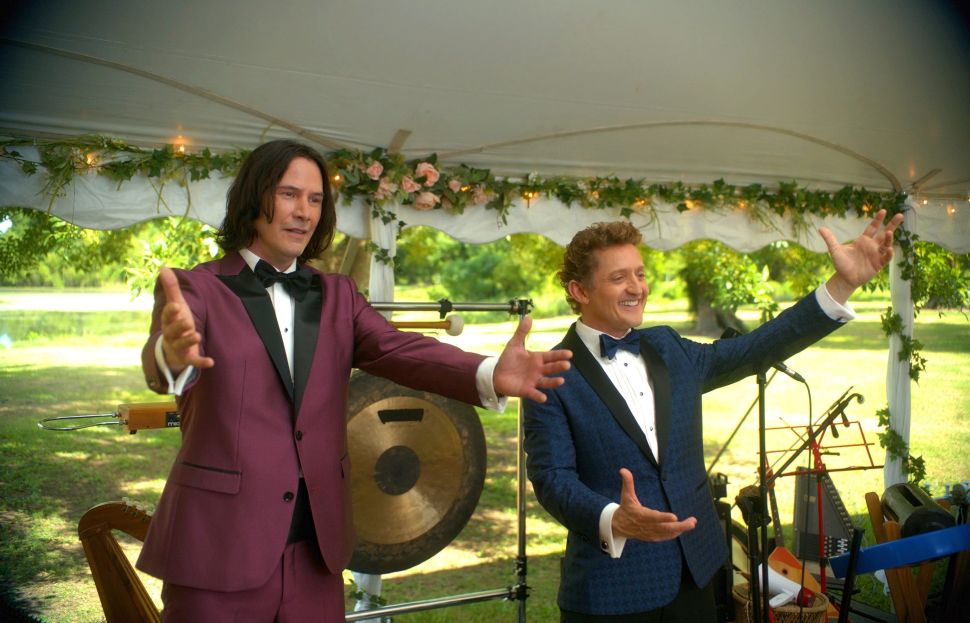