It’s been 20 years since Shamari DeVoe and Brandi Williams portrayed East Compton Clovers in the 2000 teen comedy Bring It On, but the R&B group, Blaque, still remember the moves from their iconic “Brr” cheer like it was yesterday. In between giggles, over a call from Atlanta, Georgia, they break out:

“Brr, it’s cold in here
There must be some Clovers in the at-mos-phere!

“I wish you could see me right now, because I’m doing it!” DeVoe exclaims.

That cheer, of course, marks one of the most important moments in the movie. Led by Clovers captain, Isis, memorably played by Gabrielle Union, it features hip hop–inspired choreography performed to “The 900 Number,” a sax-looped breakbeat track by the 45 King. Watching from the sidelines is Torrance (Kirsten Dunst), new cheerleading captain for the Rancho Carne Toros. She discovers her squad’s former leader has stolen “Brr” and other routines from the Clovers, a predominately Black and Latino team, and passed them off as their own.

The Toros, mostly white and from an affluent part of San Diego, have been winning championships on those cheers for years. There’s power and privilege involved. It’s cultural appropriation. This informs the trajectory of the film in a sharp commentary on race and class relations, and a fun, competitive charge to win the national cheerleading championship. The duality is what has made Bring It On a cult classic for two decades: it’s deliciously frothy, as well as enduringly relevant in its social critique.

In early 1999, Blaque—comprised of DeVoe, Williams and the late Natina Reed—were among the most exciting up-and-coming groups of the new millennium. Before their debut single, “808,” was even released, the proteges of TLC’s Lisa “Left Eye” Lopes joined NSYNC on a major tour. Then, that May, “808” dropped and was certified platinum. Blaque’s eponymous debut album followed, producing the international hit “Bring It All to Me,” which featured JC Chasez. And the girls were offered a part in a movie called Cheer Fever (Bring It On’s working title). No audition necessary.

“We were at the height of our career,” DeVoe says. “And we were represented by Johnny Wright [manager to NSYNC and Backstreet Boys], and Lisa Lopes, she was our mentor and had creative control. We were hot and they reached out to us.”

“It was so much fun, so much fun,” Williams says. “We loved it so much that we wanted to take it to our live show, and we wanted our dancers to learn how to do the stunts and everything.”

Both DeVoe and Williams had cheerleading experience: Williams was captain of her middle school team and DeVoe cheered in elementary school, so the acrobatic terrain was familiar. Still, nearly all the cast participated in a four-week cheerleading camp where they learned a variety of stunts to ensure the onscreen routines were as authentic as possible. (For the record: Blaque did all their own stunts.)

“It was so much fun, so much fun,” Williams says. “We loved it so much that we wanted to take it to our live show, and we wanted our dancers to learn how to do the stunts and everything.”

Blaque also recorded a new song for Bring It On’s soundtrack. “As If” pairs DeVoe’s rich timbre and Williams’ sweet inflections with a horn-driven melody and calls out an old boyfriend for trying to sweet talk his way back to a broken heart. Williams, DeVoe and Reed quickly laid the vocals, then flew to Montreal, Quebec to shoot the music video. There are two versions of the track and the movie’s features NSYNC’s Joey Fatone. “NSYNC was like our brothers,” Williams adds. “It wasn’t just business, we hung out with them all the time. So, Joey, he wanted to jump on the record.”

A highlight on “As If” is Reed’s rap, heard fully on the alternative version. Reed often rapped on Blaque’s songs, in a cool flow that channeled Left Eye, but delivered with a playfulness entirely her own. Her part on “As If” is sassy and empowered with lyrics like, “No platinum hits is gonna keep me from saying this, while you’re movin’ your hips and smackin’ your lips.”

“[Natina Reed] was a firecracker,” DeVoe says, softly. “She was a beast. She would always have new ideas. Everything that she brought to us was so dope and creative. She wrote all her raps. The dynamic [between us] was crazy. It was like magic.”

DeVoe and Williams both sigh heavily when asked about Reed, who tragically died in a traffic accident in 2012. DeVoe and Reed had been close since they were 10 years old. “She was a firecracker,” DeVoe says, softly. “She was a beast. She would always have new ideas. Everything that she brought to us was so dope and creative. She wrote all her raps. The dynamic [between us] was crazy. It was like magic.”

“I remember in the beginning, before Blaque had even hit the scene, before we even recorded our album, we would be at my house or somewhere, and Natina would be beating on the wall, beatboxing, and we would be singing songs that she wrote,” Williams adds.

In Bring It On, Reed plays Jenelope to DeVoe’s Lava and Williams’ LaFred. Jenelope is tiny yet enormous in attitude, and delivers some of the film’s best lines, including, “Can we just beat these Buffys down so I can go home? I’m on curfew, girl”—a nod to the fact that three of the actors, Dushku, Clare Kramer and Nicole Bilderback, also appeared on Buffy the Vampire Slayer.

“[Reed] was really serious about her role, trying to be that bad ass that Jenelope was,” Williams says, with a smile in her voice. “She got into her character, on set and off set. I was definitely inspired by just watching her.”

Union was also a source of inspiration and support for Blaque. Williams fondly recalls sharing mornings in a trailer as they had hair and makeup done. “She would help me read my lines, because, you know, this is our first movie, I’m nervous, I’ve never done this before. And she would give me such great advice and just tell me, ‘See? It’s going to be okay. If you mess up, it’s a movie, you can cut and do it again.’”

“It was their first time acting, period,” Union told MTV in 2015. “So teaching them about marks and where the light is and where the cameras are…It was one of those movies where everyone wanted to get it right and everyone was committed to humbling themselves to do the work.”

A commitment to diversity, in particular, was one reason Union agreed to Bring It On in the first place, despite Isis originally being, as Union described in an interview with Complex, a “very exploitative film depiction of a Black woman.” Union wanted to move the character away from that and, as a result, Isis is not reduced to a harmful stereotype. She is a grounded leader who inspires her team in their fight for equality and representation.

“We know that the African American culture has been stolen and taken and remixed and turned into something else,” Williams says. “We didn’t really discuss it [on set], but we knew what we were trying to say was real and it was impactful.”

Williams says that while issues surrounding appropriation weren’t talked about much on set, it was still understood what the intentions were in telling the story. “I think that, unfortunately, we know [cultural appropriation] to be true, in so many areas of life. We know that the African American culture has been stolen and taken and remixed and turned into something else. It’s something that’s been done, it’s something that we’re used to, which we shouldn’t have to be, but it’s the truth,” she says. “We didn’t really discuss it, but we knew what we were trying to say was real and it was impactful, and it needed to be said.”

The Toros are dismissive of the theft—no time to create a new routine before the competition. But when the Clovers call them out at a football game, the team is mortified and decides to come up with something original. With nationals on the horizon, Torrance approaches the Clovers with a check to help pay their way. To her, it’s a gesture to make things right. But it highlights the difference in opportunities afforded to the teams due to social class and systemic racism—the Clovers, from an inner-city school, could never afford to attend the competition. Isis tells Torrance they don’t need her money and, in that legendary line, to “bring it” at nationals.

The Clovers win the championship. That they got there on their own merit and the plot didn’t utilize predictable tropes where the Toros, the underdogs, would’ve triumphed after starting from scratch is fundamental to the story’s integrity.

“Bring It On was a comedy,” Williams continues. “It was funny. But at the same time, it touched on very real issues that we’re still dealing with today, obviously. And I think it did a great job with doing it in a way where it was tolerable, where it wasn’t so in your face. It was definitely needed [then] and it’s needed now.”

When it comes to legacy, the relevance of the movie’s social justice message can’t be overstated. Racism is at the center of a worldwide reckoning twenty years later. Cultural appropriation is everywhere—media and pop culture are fraught with it, from music and fashion to celebrity. And Bring It On’s treatment of it provides a powerful example of how appropriation doesn’t have to be obvious to reflect a deeply rooted problem.

For DeVoe and Williams, the greatest takeaway from the film today is understanding Bring It On’s ultimate point: equality. It’s not about Black or white, DeVoe emphasizes. It’s about unity.

Bring It On is available for rental through Amazon and other services. 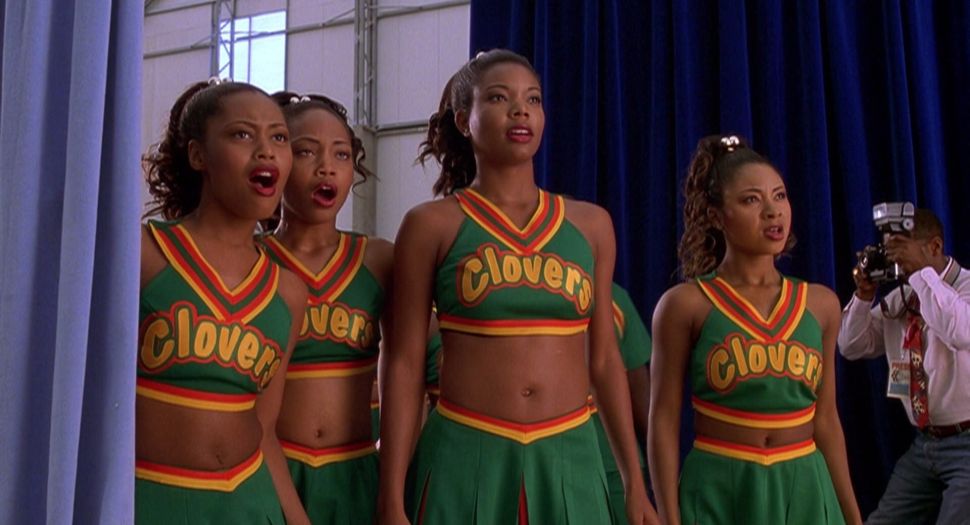