When it comes to fine art, there are private collections all over the world which retain fabulous masterpieces that have rarely been seen by the general public. Now, one of the most exclusive collections in existence is about to go on display: a sequence of 65 old masters that have hung on walls of the state rooms of Buckingham Palace for approximately 200 years.

The exhibition, which will be held at The Queen’s Gallery in Buckingham Palace beginning on December 4, will feature stunning works by Titian, Guercino, Guido Reni, Vermeer, Rembrandt, Van Dyck, Rubens, Jan Steen, Claude and Canaletto. Even better, the exhibition will be on display for a year while Buckingham Palace is renovated.

Specifically, attendees will be able to see masterpieces like The Shipbuilder and his Wife by Rembrandt. The painting is a spectacular dual portrait of Jan Rijcksen, a shareholder in the Dutch East India Company in the 1600s, and his wife Griet Jans. Unlike a perhaps more conventional portrait of a husband and wife, this Rembrandt illustrates Jans in a state of agitated urgency while Rijcksen looks blankly bemused, as though he’s just been interrupted in the middle of doing something important.

“It is an absolutely spectacular painting,” Desmond Shawe-Taylor, the surveyor of the Queen’s pictures, told The Guardian in a new interview. “Not just because of the effect of light and realism…I mean the flesh of the two elderly figures is rendered with extraordinary, palpable realism. But it is also a very tender, almost comic depiction of a relationship between husband and wife, so it’s got a very modern feel to it.”

Also on display will be Lady at the Virginals with a Gentleman by Vermeer, Madonna and Child in a Landscape with Tobias and the Angel by Titian and Christ Healing the Paralytic by Anthony Van Dyck; and this is just the tip of the iceberg. For a world that’s been battered and ravaged by an unseen enemy, this exhibition is offering insight into the sublime as a balm. 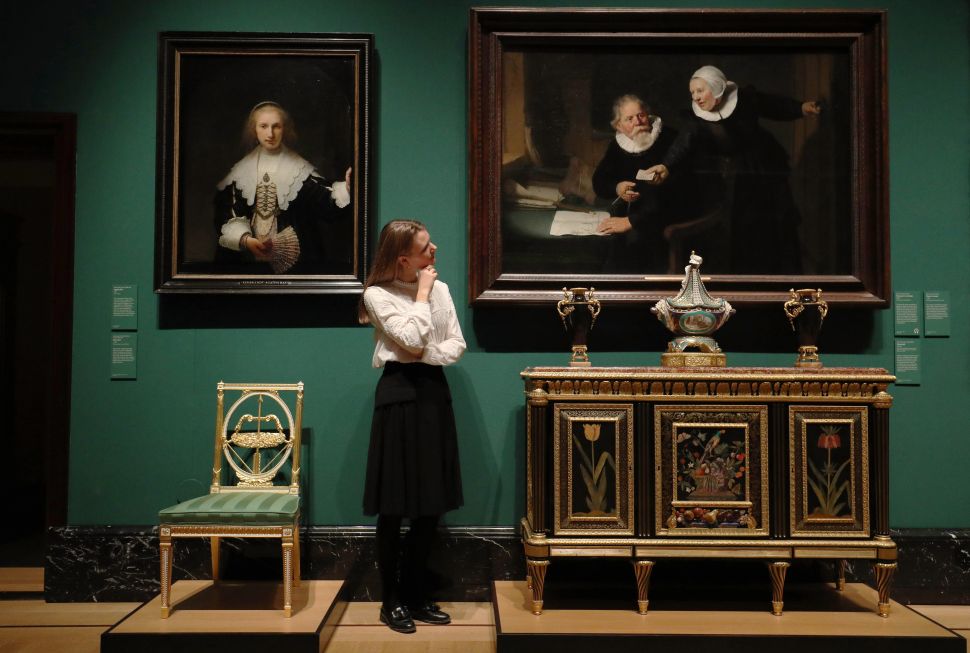