If time does indeed flow linearly, than there exists a distinct separation between past, present and future. Three factions of space-time that exist independently of one another, rather than a one-way progression. Christopher Nolan does not subscribe to this line of thinking.

Instead, he champions the theoretical proposition of causal loops, or a “bootstrap paradox,” in which a sequence of events causes another event, which then creates the first link in the chain. A popular example of this is John Connor sending Kyle Reese to the past in Terminator to become his own father, essentially creating himself in the process. Such brain busters are at the very center of Interstellar, Nolan’s most polarizing blockbuster (even in the face of positive but divided reviews for Tenet, his latest).

At its core, Interstellar is Nolan’s most personal and hopeful film. But underneath that hope there’s a steady stream of mental baggage that this decaying world and its characters must contend with; a baggage that exists materially apart from the film but nonetheless informs the narrative and their choices in it. The movie knows there can be no present or future without the past, but suggests we are not beholden to the mistakes and problems of before as we look to move forward.

Interstellar is a unique time-centric blockbuster in that its heart and mind belong to the past even as it leaps forward into ensuring humanity’s future, literally traversing that vast distance throughout the course of the story. Set in the year 2067, the movie actually opens nearly a century later with an important framing device: a documentary that recounts the time that the film’s events actually take place.

The documentary, which delivers exposition about the crop blights, dust storms and starvation plaguing Earth, introduces the audience to this new era. It is perhaps intentionally reminiscent of Ken Burns’ 2012 documentary The Dust Bowl, which recounts the unimaginable struggle of the United States during the Dust Bowl and Great Depression of the 1930s. In a way, this is Nolan’s attempt to reinvent a past catastrophe and retrofit it for a realistic future setting. Looking back on the state of the world in this way is the catalyst for the film’s actions, sure, but it’s also a thematic motif that runs throughout the film. We are constantly considering the past.

This idea is vocalized in varying ways. Murph’s teacher argues that the U.S. faked the moon landing as a brilliant piece of propaganda that caused the Soviet Union to bankrupt itself in the Space Race. As delivered, it’s implied this idea is not nearly as far-fetched to the people of 2067 as it sounds to us here in 2020 (a year with its own apocalyptic undertones). Later, Matthew McConaughey’s Cooper laments that humanity “used to look up at the sky and wonder at our place in the stars. Now we just look down, and worry about our place in the dirt.”

The first instance implies that the society of the future is more interested in rewriting history to better fit their current narrative and desperate situation as opposed to looking to the horizon for solutions. The second crystallizes the contrast between what humanity once represented and what it now has become. For a futuristic blockbuster, Interstellar is clearly enamored with the idea of reconciling the past versus the future.

Nolan then redevelops the connection between the past and future into a new, morbid iteration. Matt Damon’s Dr. Mann and his fellow astronauts are sent through a wormhole to explore potentially habitable worlds on the other side of the universe. Their mission is part of the Lazarus Program, a reference to the religious figure Lazarus of Bethany who was said to be raised from the dead by Jesus four days after his demise.

“Lazarus came back from the dead,” Michael Caine’s Dr. Brand said, insisting it’s a symbol of hope. “Sure, but he had to die in the first place,” Cooper retorts. Great suffering, despair, and loss must first occur for this rebirth to be possible. Not only is this a subtle nod to Dr. Brand’s true agenda (he has already lost hope for the humans of Earth), but a summation of this world’s mental state. Something must be lost or taken before it can be gained and found; what has happened supersedes what will happen. And yet, Interstellar—with its chaotic fascination with a past full of horrors and the small mindedness of looking backward—is actually quite hopeful for the future.

Interstellar is steeped in the past, using it as a framing device, a mental state and a nihilist attitude.

“Something sent you here. They chose you,” Dr. Brand tells Cooper. We ultimately discover that Cooper chose himself through one of those fancy schmancy causal loops we mentioned earlier. But that doesn’t undercut the fact that Interstellar hinges on the idea that our choices and actions in the future are actually our salvation. In fact, it heightens it.

The very undertaking of this mammoth mission in Interstellar speaks to the limitlessness of human potential and, therefore, a hope and belief in our ability to endure and survive. The future, despite Dr. Brand’s cynical condemnation and this world’s mental immobility from the past, is actually our way forward and not just our inevitable end. “Rage against the dying of the light,” goes the oft-quoted Dylan Thomas poem that surfaces several times in the film. Yet few in the world of this film are capable of truly challenging the hold the past has on us. It is only when we realize that the next choice is actually an opportunity that we begin to turn our gazes to the horizon and understand Thomas’ true intention.

Interstellar is steeped in the past, using it as a framing device, a mental state and a nihilist attitude. And yet that focus only enhances its future-set story, which makes a hopeful push toward whatever is next on humanity’s journey. Time may be used as a relative and physical construct that positions one family’s struggle as a parallel to mankind’s and dictates the flow of the plot. But it’s also the core message of the film. We’re in this together and the only way forward is, well, forward. 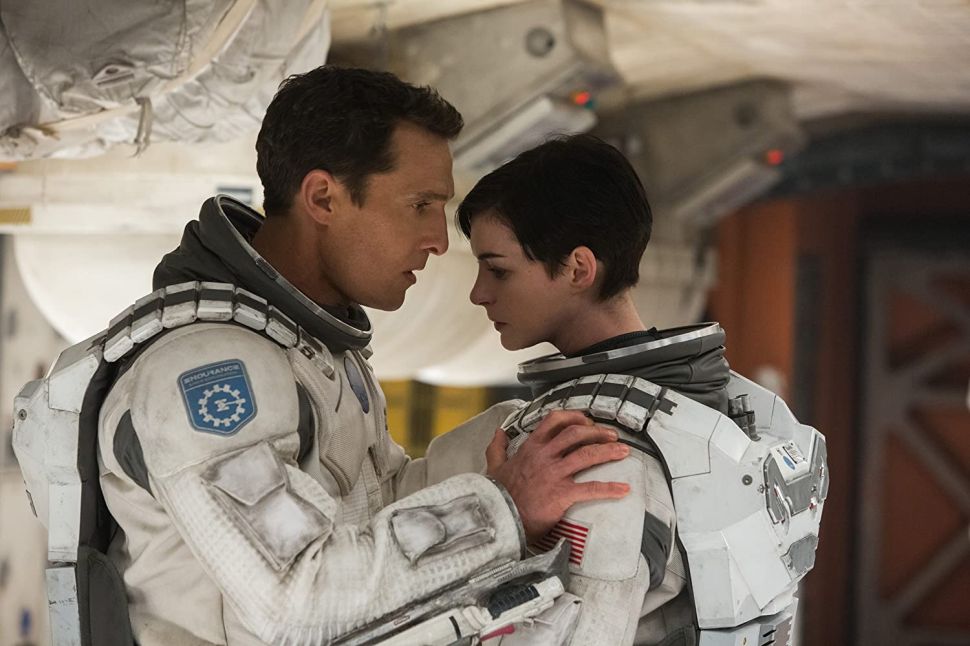