Welcome to NOLAN/TIME, a series exploring how we’ve watched the clock in Christopher Nolan’s films.

The last track on the soundtrack of the Inception is also the music that plays before the credits, as Leonardo DiCaprio’s character finally achieves his catharsis right before the scene’s infamous parting shot reveals itself to be—in the director’s own words—the movie’s final “kick.” If you know, you know, and if you don’t, we won’t spoil it here. But the song, composed by Hans Zimmer, has a simple name: “Time.”

And time is far and away Nolan’s favorite plaything, whether he’s stretching it out to exponential lengths in Inception or “inverting” it as the trailers for his latest film Tenet have teased. But Nolan’s been at this for far longer. Since his first feature film Following tore through the festival circuit and made Nolan an up-and-coming director in the early ’00s, he has re-jiggered his linear narratives in some way in practically every film he has made.

The results have paid off spectacularly. As of today the movies directed by Christopher Nolan have grossed over $4.7 billion worldwide—more than all but five other directors in the world. Nolan’s films also, for the most part, enjoy wide critical respect; his career average on Rotten Tomatoes average is 86%.

But in terms of the art, none of this matters so much as the films themselves, what Nolan shows us on screen. Ever since the tortured final moments of Following and the violent uncertainty of Memento, both of which he also wrote, we’ve known exactly the type of filmmaker he was: a clock keeper who would ensure scenes were placed with precision, timed to land in the order they needed to for the story to hit with the most impact; and a ruthless agent of a late-film knife twist, as much the author of a great short story as he was a director.

Nolan’s films have not always achieved their clock keeper’s intended heights, but they have always been interesting, even Tenet, a not-uncontroversial blockbuster that happened to be the film Hollywood placed its hopes on to comeback from the COVID-19 pandemic. Whether or not it delivers remains to me seen.

What is certain, however, is that this is an opportunity to revisit a filmmaker’s obsession with his pet concept. That’s why Observer is dedicating this series—NOLAN/TIME—to better understanding them in the days before Tenet officially premieres in the United States. We’ll update this list below as well as our archives with pieces as they publish, and we invite you to join us in explore the director’s fascinations and how they manifest onscreen.

‘Tenet’ Has a Lot of Flash and Bang, But Little Depth

Emily Zemler assesses the merits and the mistakes of Nolan’s latest film.

The Synchronized Heights of ‘The Dark Knight’

Charles Bramesco isolates why the stacking climaxes of The Dark Knight hit so hard.

The Psychology That Crushes Christopher Nolan’s Characters Over Time

Brandon Katz interviews psychologists to isolate why Nolan’s characters feel so driven—and why audiences feel so captivated by their stories.

The Connective Tissue Between Nolan and Spielberg’s WWII Films

Rafael Motamayor explains how Gotham City—both in design and atmosphere—evolved as the Dark Knight trilogy’s mysteries were revealed.

Eric Vilas-Boas grapples with how the ideas in Nolan’s first feature followed him in every movie since.

‘Interstellar’ Reconciled the Past to Deliver Hope to the Future

Brandon Katz tells the story of how  Nolan’s looked backward to move his most cosmic story forward.

The Endlessly Spinning End of ‘Inception’

Eric Vilas-Boas weighs in on the conversation this film started that will never end.

Nolan’s ‘Memento’ Reversed Its Story to Subvert Its Hero

Matt Sigur uses the imagery and reversed plot of Memento to discuss how its sequence of scenes changes our perceptions of its protagonist.

‘The Dark Knight Rises’ Battles Its Own Perceptions of the Past

Sara Century argues for why Nolan’s Batman trilogy ended with a movie all about characters struggling to live in their present.

Nolan’s Heroes Usually Lose Everything to Time and Lies

Rafael Motamayor tallies up the cost of deception and chronological buffoonery across the bulk of Nolan’s filmography.

The Message in the Magic Trick of ‘The Prestige’

Palash Volvoikar maps Nolan’s own magic trick in ‘The Prestige’ onto the filmmaker’s earliest movies.

An Idiot’s Guide to “Time Inversion” in ‘Tenet’

Rafael Motamayor explains what we’ve all been wondering since the Tenet trailer dropped: what the hell is “time inversion”?

Josh Bell weighs the pros and cons of seeing ‘Tenet’ at a drive-in theater, in spite of Christopher Nolan’s wishes.

Why Time Runs Out in All of Christopher Nolan’s Films

Emily Zemler closes our series by elaborating on why the ‘Tenet’ tagline applies to Nolan’s entire filmography.

Follow this space as more NOLAN/TIME stories are published every day until the release of Tenet. 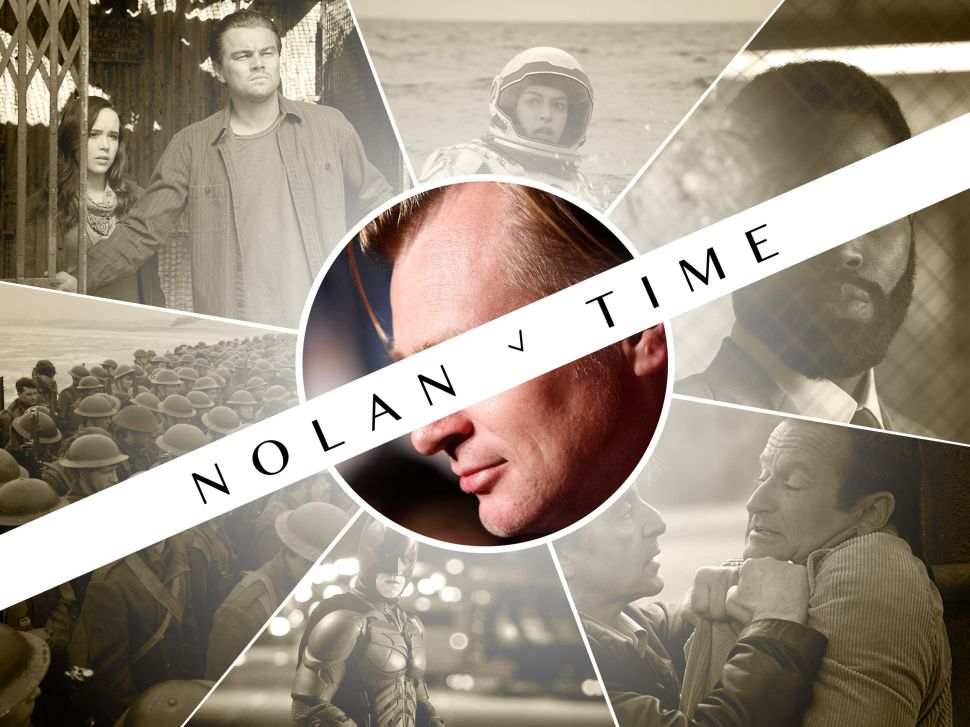