Is it possible that we’ve already hit the saturation ceiling for streaming services? Despite the ongoing coronavirus pandemic, home restrictions have loosened nationwide and movie theaters are preparing phased reopenings beginning as soon as August 20. That doesn’t bode well for Comcast and NBCUniversal’s fledgling streamer Peacock, which launched wide on July 15.

The streamer boasts two tiers: Peacock Free, an ad-supported package that is accessible at no cost, and Peacock Premium, which houses more content and runs viewers $4.99 per month. Over the course of the streamer’s first two weeks  Reelgood—a streaming aggregator that tracks every TV show and movie available online—found that Peacock Free accounts for 89.5% of the streamer’s activity while the remaining 10.5% can be attributed to the streaming service’s Premium (paid) tier. This isn’t very surprising given that Free users get access to 92% of the Peacock’s Premium catalog as of July 31, 2020.

Free offers 672 films (many of which are worth a second look) and 249 TV shows while Premium has 730 movies and 269 series available. But which are viewers flocking to in the early going? 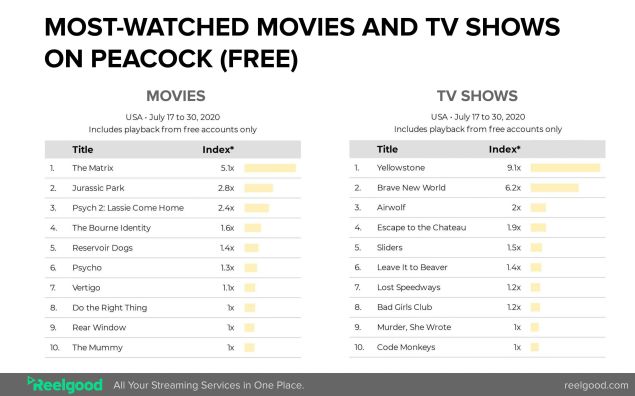 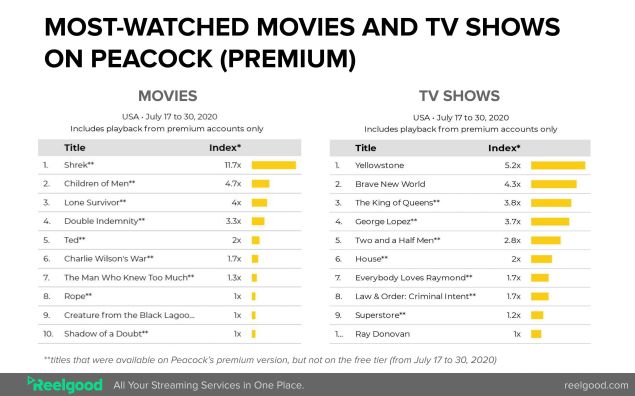 It’ll be interesting to see how things play out on Peacock now that some of their biggest titles (e.g The Matrix, Jurassic Park, Shrek, Children of Men, The Mummy, etc.) have been pulled from the service. On the TV side, Kevin Costner’s increasingly popular Neo-Western Yellowstone continues to be a big audience draw. However, similar to HBO Max, Peacock does not boast a clear cut breakout mainstream original hit (yet).

This data differs slightly from the insights provided by Parrot Analytics, which tracks TV popularity through social media, fan ratings, and piracy to figure who’s watching what. According to that data analytics firm, here are the 10 most in-demand Peacock originals and top shows overall (which includes licensed programming) over the last 30 days in the United States.

Fan get exclusive early access to NBC’s acclaimed late night shows through Peacock, which may account for their early popularity. On Peacock Premium, NBC’s late night talk shows will be streaming on Peacock beginning at 8 p.m. ET with The Tonight Show Starring Jimmy Fallon, followed by Late Night with Seth Meyers at 9 p.m. ET. 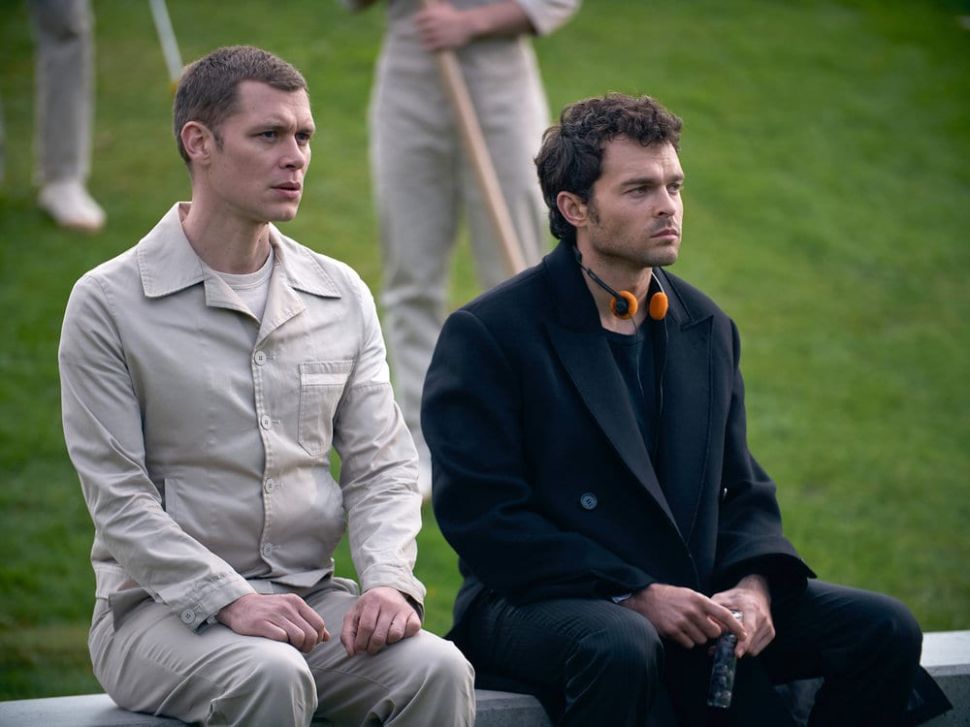