Earlier this week Jay Leno became yet another celebrity to offer support to talk-show host Ellen DeGeneres. DeGeneres has been accused by numerous employees of fostering an abusive workplace culture in which racism, bullying and retaliation, were endemic and tolerated. Last week Buzzfeed News reported on additional accusations of sexual harassment and misconduct by top executives. But these multiple credible accusations of abuse have not stopped DeGeneres’ powerful friends from defending her and apologizing for her.

The rush to protect DeGeneres from consequences or accountability is a good illustration of the way in which powerful people with large platforms rally to each other when challenged. We might call this chattering class solidarity. Chattering class solidarity demonstrates, and explains, the structural incentives which make it so hard, in so many situations, to hold the powerful accountable when they harm the less powerful.

Leno’s defense of DeGeneres read, “I don’t discard a 40-year friendship on hearsay. The Ellen I know has raised over $125 million dollars for charity and has always been a kind and decent person. I fully support her.” Actor Ashton Kutcher voiced similar sentiments: “She & her team have only treated me & my team w/ respect & kindness. She never pandered to celebrity which I always saw as a refreshing honesty,” he wrote. “When things aren’t right she handles and fixes.” Pop star Katy Perry said, “I know I can’t speak for anyone else’s experience besides my own but I want to acknowledge that I have only ever had positive takeaways from my time with Ellen & on the @theellenshow.”

All of this praise shares a common theme; Leno and Kutcher and Perry had good experiences with DeGeneres, and so DeGeneres must be a good person. Her wife, the actress Portia de Rossi, also shared a graphic on Instagram with the hashtag #IStandByEllen.

The problem here is obvious. It is possible to treat powerful peers with deference and respect, while treating employees and inferiors very badly. Anyone who has worked basically anywhere has seen bosses who are friendly and collegial with other managers, but who bully secretaries, or chew out employees for coming in five minutes late. As actor Rachel Bloom wrote on Twitter, “the experiences of celebrity guests on talk shows are very different from the experiences of staff. ” Workplace relationships are structured by, and help to perpetuate, differences in power.

Talk-shows are particularly open about the way in which professional and personal networks blur into each other for purposes of mutual self promotion and monetization. DeGeneres interviews powerful people like Jay Leno in a friendly setting, allowing him to promote himself and to promote her simultaneously. Leno in turn interviews powerful people like DeGeneres. DeGeneres knows that she is valuable, and actually is valuable, because she is friends and colleagues with Leno. Leno knows and is valuable because he is friends and colleagues with DeGeneres. It’s mutual performative backscratching. It makes the media go round.

It follows, then, that a cessation of the backscratching will make the media stop going round. No one who lives off the media wants that—and so there is an incentive to rush to the defense of anyone in the charmed circle who is accused of wrongdoing.

Chattering class solidarity is in the interest of powerful chatterers for a number of reasons. First, powerful people are likely to retain power; DeGeneres will no doubt remember her friends.

Second, and probably more importantly, when status and power are created through mutual admiration, you want to defend the person who admires you because that admiration is itself a kind of power and status. Again, Leno says this directly. “I don’t discard a 40-year friendship on hearsay.” DeGeneres’ treatment of him is valuable. The accounts of DeGeneres’ employees are ephemeral, devalued hearsay, not to be credited. The mutual relationships of the powerful must trump relationships with the staff. If DeGeneres’s virtue is diminished, her admiration for Leno will likewise have less currency.

The final reason for chattering class solidarity is that accountability for one can potentially mean accountability for all—and the powerful often enjoy their lack of accountability. We don’t know that Leno sees himself in DeGeneres’ shows, but it’s likely he does, since he has in fact been accused of abusive behavior himself.

Actress Gabrielle Union, for example, reported that Leno made a racist joke on America’s Got Talent in 2019—an incident that contributed to a toxic work environment which she said led her to leave that show. Back in the 1990s, Leno used his platform to heap relentless misogynist abuse on Monica Lewinsky. He has never apologized, because he doesn’t have to, because, again, it is difficult to hold powerful people accountable when other powerful people shield them and give them platforms on their talk shows.

Chattering class solidarity is loud because the chattering class is, by profession, loud. But the dynamics by which groups of powerful people protect their own aren’t restricted to actors and talk show hosts. Any abusive workplace culture—like the one alleged to include executives on DeGeneres’ show—involves the in-group and the out-group. Some are powerful, and other powerful people value them, see themselves in them, and don’t want them to be held accountable. Others are less important, and can be mistreated with impunity.

The powerful treat each other differently. If they didn’t, how would they, or anyone, be able to tell the important people from the unimportant? Chattering class solidarity is not just a way to defend bad actors. It’s a way to keep those on top talking, and to silence everyone else. 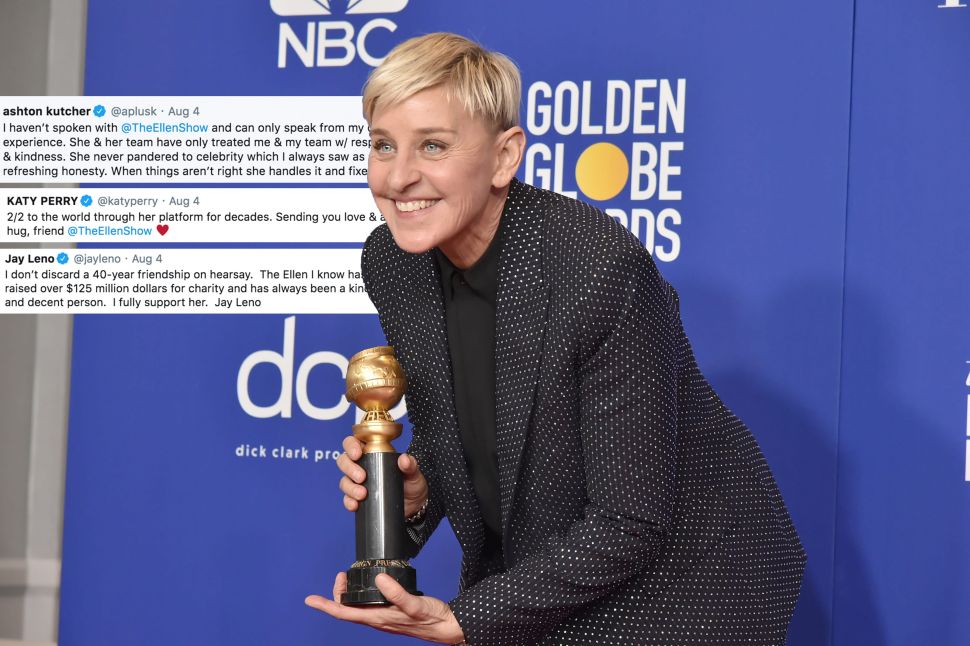