While the rest of us have been mostly stuck in our own spaces for the past few months, Emmy Raver-Lampman has been reclaiming space for women of color in entertainment. Her very presence on Netflix’s The Umbrella Academy has reshaped and expanded the show’s superhero time travel narrative. And when Apple TV+’s animated musical Central Park returns for its second season, she’ll be taking over the role of biracial teen Molly, originally voiced by Kristen Bell.

“I feel like we’re at the precipice of Hollywood really starting to open the door to tell more stories for Black people and for all marginalized people,” she says. “Representation allows us to broaden how we tell stories.”

Nowhere is that more true than in The Umbrella Academy. Raver-Lampman plays Allison Hargreeves, aka The Rumor, who can manipulate people simply by speaking to them. In the show’s second season, Allison and her superpowered siblings are thrust back in time to early 1960s Dallas, Texas, where she quickly becomes involved in the city’s civil rights movement. It’s a story that isn’t featured in the comic books on which the show is based, in which the character is white.

SEE ALSO: ‘Bring It On’ at 20: Blaque Reflect on Playing Clovers With Gabrielle Union

“The decision to take all the characters to the ‘60s was just following the comic books,” Raver-Lampman explains. “And I think there were then immediately separate conversations. If we’re doing that, these are situations that we can’t avoid.”

Observer spoke to Raver-Lampman recently about some of those situations and nerve she hopes they strike with viewers.

Observer: What was your relationship to superheroes as a kid? Did you have any favorites?
Emmy Raver-Lampman: You know, I didn’t really. This show has kind of opened my eyes to the world of superheroes in a way that I wasn’t really aware of before.

Now that superheroes are such a big part of Hollywood and television, it seems like something every actor has to consider. What were your thoughts on playing a superhero before you were cast in The Umbrella Academy?
Because my background is mostly in theater, there is something about the logistical side of being a superhero that interested me as an actor. You know, working on a green screen and learning fight choreography and doing stunts and working on wires. All of that kind of stuff was definitely something that intrigued me. I mean, a slap across the face is usually as serious as it gets in theater! [Laughs.]

Let’s talk about Allison Hargreeves. What did you know about the character going in?
I think there was a lot up in the air. Steve Blackman and Peter Hoar, who directed the first episode of the first season—I think they wanted to cast the show diversely. I think that was really important, because if you look at the comics [the characters] are all white, and they didn’t have any interest in having an all-white cast. But I kind of believe that they were really intrigued in seeing what the actors could bring to these roles.

Did you have a sense, back then, of just how much your being cast in the role would impact and expand the sort of stories the show was going to tell?
You know, I think the first season was about the show establishing itself. The second season, I think, lent itself to [expanding] that. There was no way around it. They did follow the comics and go to Dallas around the time of Kennedy’s assassination. So that’s the ’60s in the very segregated South, and you’ve cast a Black woman as Allison. So, there was an opportunity there to tell that story, because she would have a very different experience in the ’60s in Texas than the rest of her brothers and sisters.

It’s really remarkable how often we’ve seen time travel in TV and films, and yet those stories almost never explore what it would be like for anyone who isn’t a cis white straight person to adjust to life in the past.
I had no interest in glazing over what it would be like for Allison to exist in the ’60s. Because she is so independent and strong, it makes sense that she would find herself in the middle of the movement and kind of grow into a newer version of herself where she’s learning to use her voice in a completely different way.

I was listening to a podcast interview you did recently where you were talking about filming the lunch counter protest scenes in Season 2. You mentioned that between takes, the white actors were apologizing to you for the things they had to do in those scenes. What was that like for you, to sort of have to take on the additional emotional labor of navigating their feelings?
We are trying to depict a very specific moment in history that is really sensitive and raw and very violent and ugly and hateful. It was very important that nobody went home feeling any kind of way—that they had been mistreated or been offended, or they’d been ignored, or that they’d been, most importantly, asked to do something that they fundamentally felt that they just couldn’t do. I think people apologizing to me in the moment was coming from the creation of a safe space in that moment. For a lot of people, having to yell terrible things at me or dump salt and sugar on all of our heads—those are terrible things. I can’t imagine being in their shoes and having to do that. But I think the apologies were just coming from a place of just…Please don’t think that this is something that I’m enjoying or that this is something that is easy for me. And I mean, I didn’t take any offense to it. We are all just here trying to do our jobs, so please don’t apologize for doing your job! And if you are, unfortunately, feeling the need to apologize, it means that we are pinching the nerve that we are trying to pinch.

I’d love to talk about Central Park. You’re taking over the role of a biracial character who was originally voiced by Kristen Bell, who is white. Were you aware that it was still so common for white voice actors to be cast in non-white roles?
Yeah. I definitely had clocked that in several cartoons. I think there are now conversations that can be had—and I’m just speaking specifically about Central Park—that can be had about Molly that can involve me, and what it was like for me as a biracial teenager growing up. It broadens the ability to tell stories. Now having a biracial woman voicing a biracial character, we can actually have her talk about the struggles of finding the right hair product when you’re half white and half Black. We can talk about the struggles of, where do I fit in? That can be a tricky conversation to have and a tricky story to tell when it is not voiced by the person that is being represented on the screen. I wish I had Central Park growing up. I wish I had someone I could identify with, and I think that was really important to Kristen, which is why she wanted to give the opportunity to somebody who can properly represent Molly.

Was there part of you that was hesitant to sign on to work with people who clearly thought it was ok to cast a white actor in a Black role to begin with?
No. Because I think [of] the fact that they have taken the steps, to cast a biracial actor. I am excited that now I get to be a part of that progress and that learning. Black people and people of color and marginalized people have not been given these opportunities, especially in the voice-over space. I’m really excited to be a part of this new family that is trying to be part of the change and has zero interest in being a part of the problem. They want to be part of the solution. 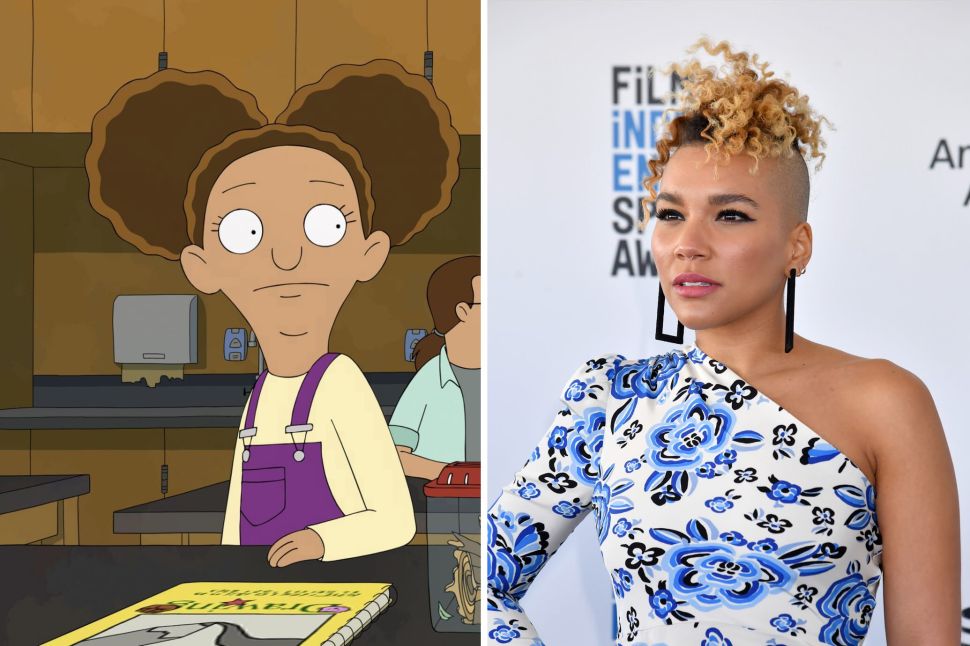