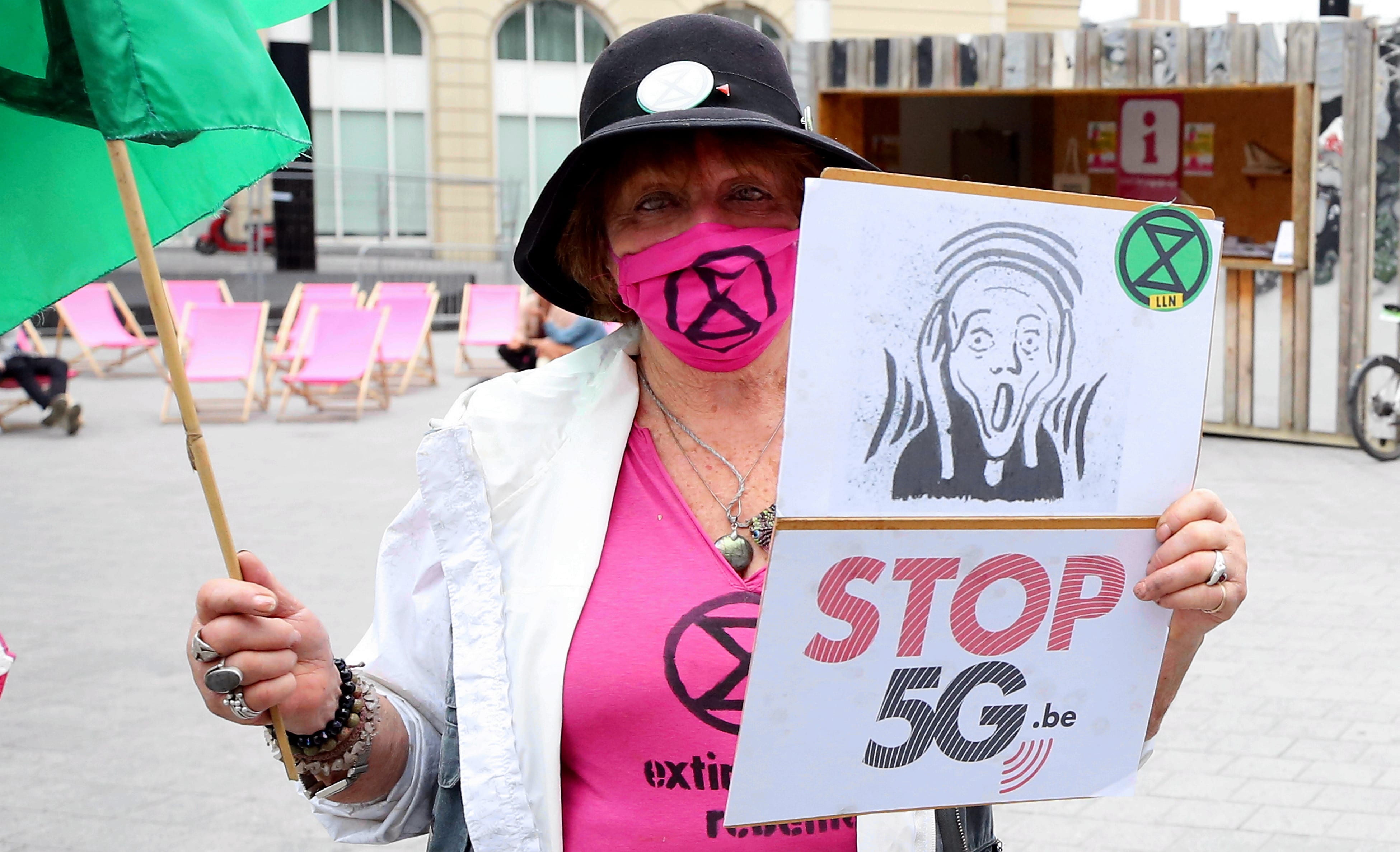 The whispers began as soon as the virus made its way to US shores. Back in March, the singer Keri Hilson gave it a public voice: “People have been trying to warn us about 5G for YEARS. Petitions, organizations, studies…what we’re going thru is the affects [sic] of radiation. 5G launched in CHINA. Nov 1, 2019. People dropped dead.”

Later that day, her management had her delete the tweets, but it was just the beginning of the conspiracy that the launch of 5G caused the spread of COVID-19. After percolating around the internet for months, and building on countless legitimate concerns and anxieties about 5G, this conspiracy went as mainstream as it gets — both the US and UK governments are now working to ban Chinese 5G from their infrastructure.

In a digital ecosystem plagued by the spread of misinformation, the ease with which these theories can circulate is pronounced, and has never before been so effective. Suddenly, amid such confusion and inconsistency with information surrounding the coronavirus, it may not seem so ridiculous that 5G radiation could be weakening our immune systems (harkening back to conspiracies about electromagnetic fields and power lines causing cancer and other illnesses in the 1970s), thereby making us more vulnerable to the virus.

“One thing about the pandemic is the number of contradictions and policy reversals, the general climate of uncertainty,” Dr. Joseph Downing, who co-authored a recent study into the origins and spread of 5G conspiracies, tells Observer. “There’s actually no shortage of reliable public information, but in this polarized context of distrust, it’s going to be difficult.”

From there, it can be a slippery slope to imagining that George Soros or Bill Gates—common targets of QAnon and other conspiracists—played a role in both 5G’s launch and COVID-19’s spread as part of an effort on behalf of Big Pharma, perhaps in order to inoculate citizens with a vaccine that would insert tracking chips into our bodies (as propagated by the viral film Plandemic).

Put another way, it’s easy enough to understand these theories as the latest versions of longstanding tropes within these circles (the far-right, anti-vaxxers, etc.), taking advantage of a global phenomenon and people’s desperation to know more in order to emphasize their pet obsessions (as argued in a May report by the Institute for Strategic Dialogue).

See Also: Why the UK Hung Up on Huawei 5G and What Happens Next

Dr. Wasim Ahmed, who co-authored the same 5G study, said, “Twitter experimented with fact-checks on COVID tweets, and they ended up mislabelling so that any tweet [that mentioned COVID] came with the notice, which fed the conspiracy even more.” TikTok took a similar approach, inserting a notice for “information about COVID-19” underneath any video uploaded with a related hashtag (whether or not the video itself referenced the pandemic—users may include the hashtag just to help it get seen).

As Ahmed and Downing argue, we’re faced with a kind of cross-pollination of ideas and perspectives, each more or less agreeing on the basic premise that COVID-19 is man-made or otherwise indicative of something nefarious, but each also approaching it with their own specific conspiratorial spin (they found that YouTube personalities and InfoWars were, rather predictably, some of the main spreaders). They are opportunistic actors when it comes to making their voices heard (anti-vaxxers are perhaps the best example in this case, effortlessly bringing more attention to their cause by raising alarmist questions about the eventual COVID vaccine).

Ahmed, who has studied infectious disease outbreaks like swine flu and ebola through Twitter content, notes that “there weren’t any influential voices countering these narratives, particularly health-based accounts. We think these accounts should be more vigilant about this and take that responsibility to penetrate that network.” At the same time, jokes or tweets making fun of them can backfire: “You’re helping that trend. You should just report it rather than quote-tweet it because you’re defeating the purpose of what you want to do,” Ahmed explained.

There are some scientists that believe 5G poses a legitimate risk, or at least that it deserves further examination.

In 2017, a group of scientists and doctors signed an appeal to the European Union warning of potential serious health effects of 5G and requested a moratorium on 5G’s rollout until the effects of its radiation and electromagnetic fields (EMFs) could be fully investigated. They point, for example, to people already suffering from electromagnetic hypersensitivity (reminiscent of the vague affliction suffered by Carol White, played by Julianne Moore, in the 1995 film Safe). These scientists and doctors are in the minority, but they add credence to anyone “just asking questions.”

Even Jack Dorsey, Twitter’s CEO, owns a sauna with an EMF-shielded tent.

Who is most susceptible to these theories, then? People are understandably concerned about their role under capitalism and the force that an innovation like 5G can have on working-class jobs around the world. Greatly intensified by the pandemic and the precarity it has wrought, with millions losing their jobs in quick succession, these anxieties are not only reasonable but entirely logical.

“There’s an idea that we live in a democratic process,” Downing points out. “But in the rollout of these technological infrastructures, we’re not consulted and that breeds a certain amount of distrust. They feel that something that is unproven is pushed on them.”

While this is true about many things, particularly new technologies, there’s something particularly troubling for some people about an infrastructural change, one that will have a major impact on the modern workforce. Socioeconomic status or education level are not accurate predictors of conspiracy susceptibility. Ahmed suggested one of the only reliable predictors is digital literacy, or having knowledge of communication systems and technology which can help you discern what is and isn’t true. Downing, on the other hand, simply suggested that “there are those that are susceptible, and those that aren’t.”

The obvious question, especially following Twitter’s fudged attempts at labeling, is what platforms can actually do. One approach is the one Twitter took in July to combat QAnon specifically. Twitter deleted thousands of accounts, designated QAnon as “coordinated harmful activity,” and changed their algorithm so that QAnon terms will no longer trend or appear in search results. In effect: deplatformization. Facebook appears to be taking similar steps.

See Also: How QAnon Will Fight Back Against Twitter’s Ban And What Happens Next

Unfortunately, this is unlikely to make a game-changing difference. “It’s the taking-a-sledgehammer-to-an-acorn approach,” Downing said. “Deplatforming accounts just adds on to the sense of distrust, and then no one can track these users. And they just move platforms, they go to Telegram or Signal, which use end-to-end encryption.”

Perhaps something subtler. Rather than addressing the most active culprits, Ahmed suggests, we could target those that are on the edge, because they will be easier to reach. A less-formal technique can also help—Downing previously looked at fake news surrounding the London Grenfell Tower fire, and found through a massive data set that it was largely random social media users that helped to stamp down the conspiracies. Ahmed also points to the personal responsibility of regular users, who can “report anything they see that they think is suspicious, so the platforms can more quickly detect misinformation.”

At any rate, we all risk getting stuck within an echo chamber, struggling to utilize our critical faculties to disseminate everything coming at us. In a state of perpetual confusion, anything and everything can become collateral damage. In contrast with the Arab Spring, in which things happened and then people tweeted about it, in this case people have tweeted their anxieties and theories and phone towers were then attacked, just as the Luddites attacked factory machinery during the Industrial Revolution.

As all of this is occurring, inequality is rising, the political climate is severely polarized, and we cannot assume that there is a causal link between putting out information and having it be believed. “You get the rebound effect,” Downing said, “where the harder you try, the more entrenched they become. You need a more general civic response, educate people about conspiracies and fake news, and hope that people are sensible enough that the vast majority will adhere.”

Is it that simple? As Downing himself puts it, “There’s a whole host of concerns about these [tech] giants that control so much of our lives that we have no power to dictate.” After all, it takes only a tiny fringe to change things for everyone, like the bad kid who ruins the birthday party for everyone by dropping the cake—are you sure they didn’t do it on purpose?

At the same time, people know that the dominance of 5G will unquestionably allow unprecedented levels of surveillance, and they are not entirely comfortable with the loss of privacy accelerated by increased automation and centralization facilitated by this new infrastructure.

In some ways, then, this is a bleakly familiar story: people are frustrated by their lack of control, and in their desperation, they look for answers, and that frustration is intensified and weaponized by trolls or other interested parties, resulting in a thick soup of garbage that is practically impossible to find your way through. Grab a spoon. 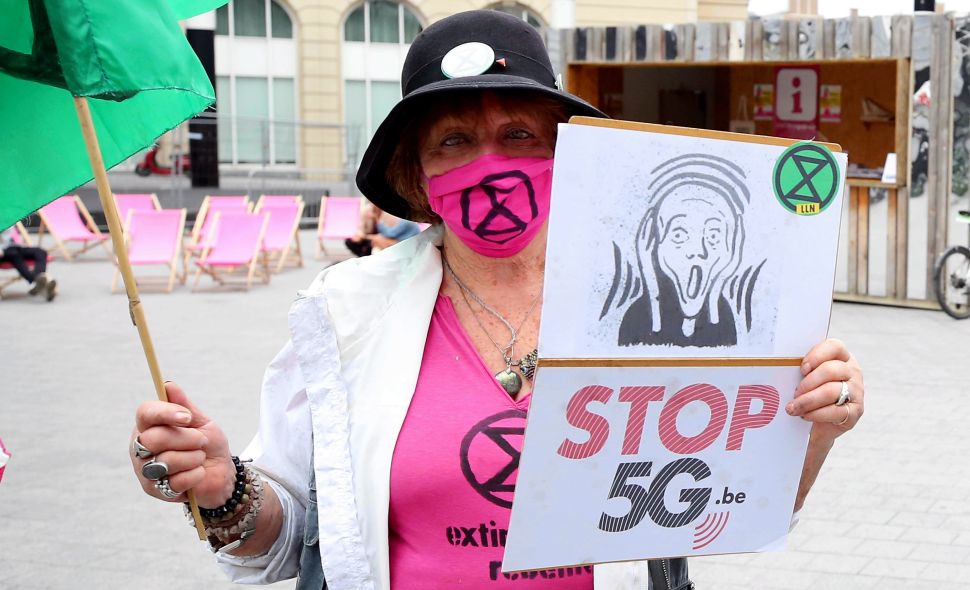