In Kelly Reichardt’s films, political commentary is usually encased in a shell of subtlety. Consider the 2004 short film Travis, an elliptical commentary on the Iraq War. Its only dialogue consists of cryptic loops of an interview with a bereaved mother; never does the film explicitly name the war that killed her son.

That career-long penchant for understatedness mostly applies to Reichardt’s latest film, First Cow, a friendship drama centered around two resourceful men—one an American chef, the other a Chinese immigrant on the run—who collaborate on a baking business in 1820s Oregon Territory. They achieve some fleeting capital by stealing milk from a rich landowner’s cow and using it to sell homemade oily cakes, pungent confections that will make your stomach grumble whether you are a 19th-century aristocrat or a present-day viewer. (The film, which is based on Jonathan Raymond’s novel The Half Life, recently hit streaming platforms after a prematurely truncated theatrical release in March.)

But there’s one pivotal scene, slightly more than halfway through the movie, where First Cow’s quiet critique of unfettered capitalism and the violence that accompanies it becomes explicit. It’s the scene where Cookie (John Magaro) and King-Lu (Orion Lee), our two enterprising heroes, visit the lavish home of Chief Factor, a wealthy and cruel-minded Englishman, in order to serve a freshly baked clafoutis to Factor and his guest, a visiting ship captain. (Unbeknownst to Factor, stolen milk from his own cow—the first in the territory—is the secret ingredient.)

As Cookie and King-Lu are seen through the window approaching the house, the chief, foregrounded in the shot, is lecturing the captain about the fiscal rewards of doling out corporal punishment to indolent laborers. “When one factors the loss of labor from the punished hand versus the gain of labor from those hands who witness the punishment, a stricter punishment can be the more advisable path,” Factor muses in a most civilized tone. “Even a properly rendered death can be useful in the ultimate accounting.”

It’s the most explicit enunciation of the class war that courses quietly through this film’s rolling wilderness, where the fundamentals of supply and demand rule the land and Cookie and King-Lu forge an unlikely solidarity. In this setting, you either exploit or get exploited. (If you’re a cow, you don’t have a choice.) As King-Lu puts it when his friend expresses nervousness about their scheme, “Men like us, Cookie—we have to make our own way. There are no empires silhouette or colors du jour for us. We have to take what we can when the taking is good.”

In fact, the film’s plot is a close cousin of the class war conceit that undergirded two of the best movies of last year, Bong Joon Ho’s Parasite and Lorene Scafaria’s Hustlers. Like First Cow, these films depict a permanent underclass (a family living in poverty, a cunning crew of strippers) forced to manipulate and scheme around the upper classes in order to survive.

First Cow is a quieter, more bucolic spin on capitalism and its discontents, but set aside obvious differences in style and tone and its storyline is a striking echo of Parasite in particular. Both are stories of working-class laborers shrewdly but riskily building livelihoods around the gullibility and stupidity of wealthy landowners. And in both films, inevitably, schemes go awry and the capital class begins to suspect that someone has seized the means (or teats) of production right under their nose. (No wonder that Bong is one of Reichardt’s biggest admirers, and has even expressed jealousy of First Cow.)

What separates First Cow from these films is the 19th-century setting, and the investigation of the role cattle played in pre-industrial capitalism. Reichardt’s films often explore complex relationships between animals and people—the filmmaker’s own dog, Lucy, was a star of 2008’s phenomenal Wendy and Lucy and a supporting player in 2006’s minimalist favorite Old Joy—and First Cow contains a key scene in which a world of suspense is wrapped up in a slightly-too-friendly nuzzle from a cow.

But this cow is more than a companion. The cow, whose real name is Evie, is the prized commodity, the unwitting harbinger of capital to the new territory, patient zero for a new century of exploitation. There’s a reason that the English words cattle and capital share the same root in medieval Latin, as James Wham pointed out in a recent essay in The Baffler. They are, or were, inextricably linked. “Reichardt’s titular First Cow might therefore be better understood as the Last Cow,” Wham writes, “in that Evie’s appearance marks the beginning of the very thing that will destroy her: the global economic system that has effectively ended the cow as a singular, terrestrial being.”

It’s tempting to veer off into a tangent about how First Cow is Eerily Relevant Right Now, because that global economic system is collapsing before our eyes, and because every great movie you watch during a profound crisis has a tendency to seem prescient or unexpectedly applicable. (This film, for instance, is about two men who must risk their lives in order to keep their small business going—timely, no?)

But Kelly Reichardt has spent a career making stirring, small-scale films populated by characters flailing on the fringes of capitalism. Much of her filmography is centered around stories of economic alienation and stymied escapes in rural settings. There was Cozy (Lisa Donaldson), the disaffected protagonist of Reichardt’s first film, River of Grass, who tries and fails to flee South Florida after an impulsive, booze-driven crime. (With its stylistic flourishes and distinct mood of rural ennui, River of Grass is an underseen gem; fortunately, it’s currently available to stream on the Criterion Channel.)

And there was Wendy (Michelle Williams) from Wendy and Lucy, a homeless woman en route to Alaska when her car breaks down and her dog becomes lost. In one of the film’s most wrenching sequences, Wendy is caught stealing a can of dog food from a supermarket. A middle-aged supermarket manager hesitates to call the police on her, but his scummy teenaged employee encourages him to have Wendy arrested. Like Chief Factor in First Cow, this adolescent authoritarian phrases it in the language of maintaining order: “Food is not the issue; it’s about setting an example.”

Reichardt reunited with Williams for 2011’s Meek’s Cutoff, her first period piece, which chronicles a group of settlers on the Oregon Trail as they cope with dwindling food and rations (as well as the bumbling incompetence of their guide, Stephen Meek). Williams also appeared in Reichardt’s fascinating 2016 film Certain Women, a triptych narrative set in Montana and populated by an ensemble of working-class anti-heroes, including a desperate construction worker injured by a workplace accident and a lonely ranch hand who wanders into a night class in aimless search of connection.

These films are often described as minimalist, employing an economy of budget and plot as though mirroring their characters’ circumstances, but low budgets do not preclude big emotions and grand ideas. And First Cow, perhaps the culmination of Reichardt’s quietly anti-capitalist filmmaking, investigates the biggest idea of all. “I like that you can see the seeds of capitalism and the natural world in the film,” the filmmaker told Interview Magazine. “And ask this question of, can those two things coexist?”

First Cow, which is primarily set in 1820, provides no simple answer. But 200 years later, you can just look out your window.

First Cow is available to stream on several platforms. 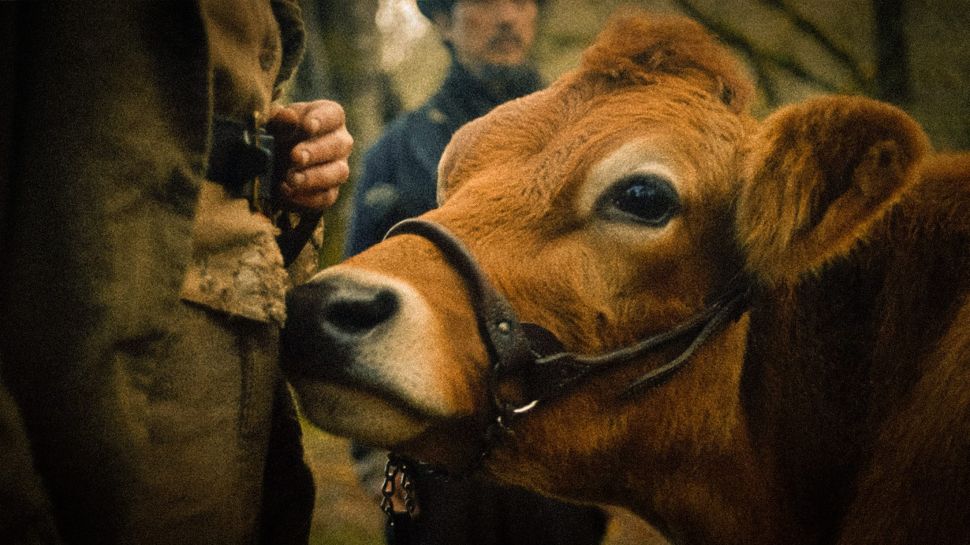