There have been many memorable items hitting various auction blocks this summer, but if you’re a person who’s particularly invested in jaw-dropping scandal, look no further than the currently-ongoing online auction of 126 lots of Fyre Fest merchandise being conducted by U.S. Marshals. 2017’s Fyre Fest, of course, was the fabulous luxury music festival and celebrity extravaganza in the Bahamas that never actually came together, leaving scores of unlucky attendees stranded without housing and munching on stale cheese sandwiches before they could be rescued. Now, the U.S. Marshals auction vendor Gaston & Sheehan is hoping to sell off as many Fyre-branded hats, bracelets and t-shirts as they can in order to drum up restitution for those affected by the scam.

“This Fyre Festival-branded clothing and other items that were seized from Billy McFarland were originally intended to be sold at the Fyre Festival itself but were kept by McFarland, with the intent to sell the items and use the funds to commit further criminal acts while he was on pre-trial release,” U.S. Marshal Ralph Sozio said in a statement. “The proceeds from the sale of these items, all traceable to McFarland’s $26 million fraud, will go toward the victims of his crimes.”

The merchandise that’s being auctioned off is particularly interesting because, before things fell apart, Fyre Fest’s biggest strength was the success of its branding. Hundreds of people were sold on a fantasy music festival on an island in part because of because of Fyre Fest’s notorious orange square Instagram campaign, appealing visual color palette and a distinctive flame and zigzag logo. Many of these features are present on the merchandise: there are ocean-blue jogger pants with a current high bid of $300, black wristbands selling for $22 that read “Conspiracy to change the entertainment industry” and several black Fyre baseball caps currently going for around $300 that call Uber’s branding to mind.

Fyre’s digital branding strategy was crafted by Oren Aks, a designer who was working for the social media agency Jerry Media. While it’s unclear whether Aks directly had a hand in the creation of Fyre’s clothing, Aks certainly selected the colors and logos that would become essential to the festival’s advertising. Last year, Aks told Fast Company that the primary role in Fyre Fest he took responsibility for was creating a sense of FOMO, or fear of missing out, in the advertising. “So I think we tapped into emotional situations,” Aks said. “We’re talking vibe, emotion. These are all separate from visuals. I think what people see is up to them.”

If you’re the type of person eager for Fyre Fest merchandise in your closet, act fast: the auction will conclude on August 13. 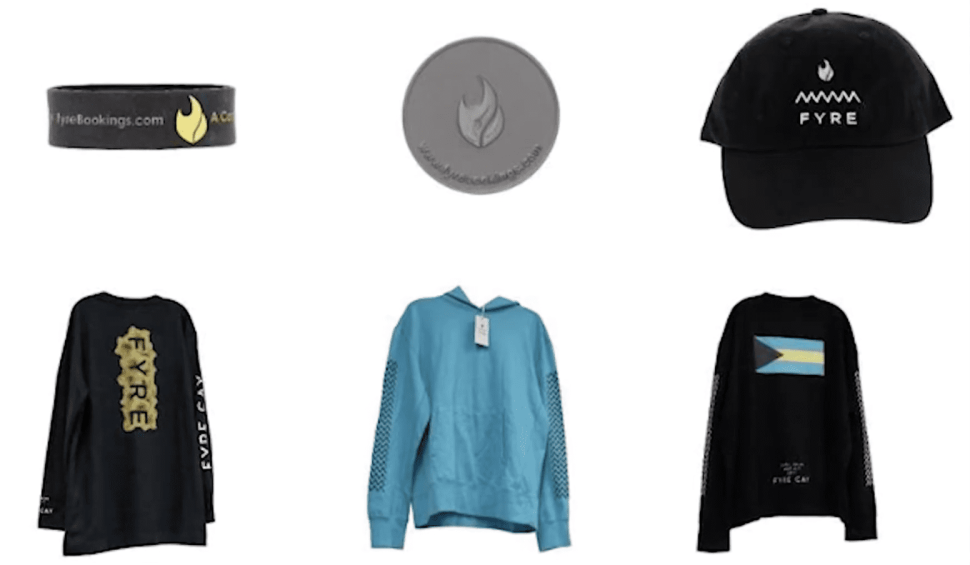