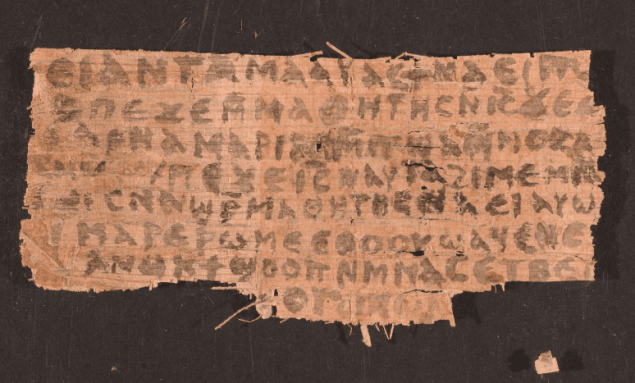 The Gospel of Jesus’s Wife, recto. The phrase “Jesus said to them, ‘My wife…’” appears, in the ancient Egyptian language of Coptic, on the fourth line of the papyrus fragment’s front side. Doubleday

A few words from the 2nd Century AD threatened to change the story of Christianity.

The Gospel of Jesus’ Wife, says Ariel Sabar, is “a fragment of papyrus, the size and shape of a business card. On one side, it has eight lines in Coptic, the last phase of the Egyptian language. The bombshell line is smack in the middle. It contains the phrase, the partial phrase: ‘Jesus said to them, my wife.’”

That phrase launched a thousand readings, until the fragment hinting at alternative biographies of Jesus and Mary Magdalene was debunked by scholars, by science, and by dogged journalists like Sabar. Veritas: A Harvard Professor, a Con Man, and the Gospel of Jesus’s Wife is the latest and, at 416 pages, the longest dispatch of a story that Sabar began covering eight years ago.

Sabar stayed on the case because “the mystery had not been fully unraveled. The more layers I peeled away, the more layers there were to peel away.” The story reached the public with the unveiling in 2012 of the purported 2nd century scriptural fragment by Karen E. King, a biblical scholar who held a named professorship at Harvard Divinity School. With that scrap of a document, King questioned Jesus’ celibacy and suggested that the wife to whom he referred could have been Mary Magdalene, Sabar writes. The prevailing view of Mary Magdalene as a prostitute, King and others argued, reflected a maneuver by early church leaders to undermine her importance and, by extension, to exclude women from positions of power.

It was Sabar who discovered that King obtained the fragment from Walter Fritz, a German man residing on the Gulf Coast of Florida. Fritz had studied and abandoned Egyptology in Berlin and he had partnered in an auto-parts company. For a while he ran a sex business, arranging swinger dates for his wife which he would film. As Sabar tracked Fritz’s pivot from the profane to the sacred, he learned that the man’s forgeries ranged from fragments of papyrus to his resumé for a job at a public school in Sarasota, Florida.

If Fritz, as a character, sounds like a cocktail of greed and guile that screenwriters might hope to imagine on their best days, I’ve left out crucial details, rather than spoil any suspense for readers. Sabar noted that the film rights to “Veritas” are for sale. 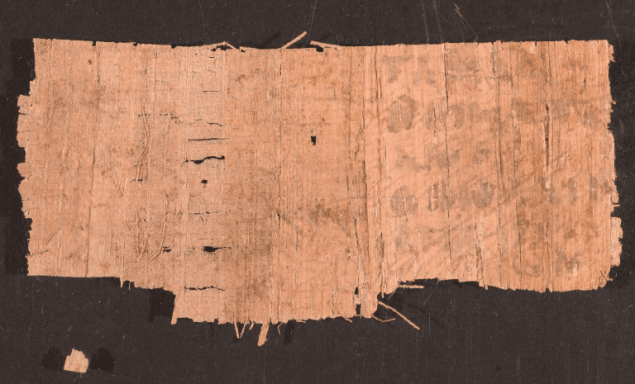 Karen King admitted in 2016 that the Gospel of Jesus’ Wife (GJW in scholars’ shorthand) was probably a fake. Sabar’s prodigious investigation shows how she got there.

“To me this is fundamentally about a search for truth. How do we establish that something is true? What are the criteria that humans have used over the ages to establish what is true?” said Sabar.

The Harvard professor in his story, Sabar said, “was a post-modernist, and post-modernists don’t buy into the idea of an objective reality.” The German who brought the scrap of papyrus to her attention was a man who concocted stories to fit his needs.

“Walter Fritz (or whoever fabricated the provenance documents) was aware that in the current environment it was not enough to produce a sensational papyrus fragment. You also needed an incredible story of provenance [history of ownership],” Sabar noted.

Then there’s the money. Collectors of biblical fragments have sent prices in this once-quiet market skyrocketing.

“I am avowedly an empiricist. We have a duty to try to find facts,” said Sabar, who won the National Book Critics Award for his 2009 work of investigative family archaeology, My Father’s Paradise: A Son’s Search for His Jewish Past in Kurdish Iraq.

And who wouldn’t want to echo a book that sold some 80 million copies? “People say that about their books all the time. There’s a million books that are ‘a real-life Da Vinci Code,’” Sabar said. “What’s interesting is that The Da Vinci Code, although a work of fiction, winds up influencing how people process history.”

What separates fiction and history in the saga of the Gospel of Jesus’ Wife is a reality check. “If The Da Vinci Code is the fictional story in which a Harvard professor discovers this long-buried secret about the marriage of Jesus and Mary Magdalene, and turns the world on its head,” Sabar said, “the Gospel of Jesus’ Wife story is one in which a Harvard professor believes that she has discovered evidence that early Christians believed that Jesus and Mary Magdalene were married, and then turns out to be the victim of a brilliant con.”

Given the enduring excitement around both cases, is the public now primed for another jolting scriptural “discovery”?  Sabar paused. “I was hoping that the opposite would be true,” he said, noting a heightened skepticism among experts.

We’ll have to take that on faith. 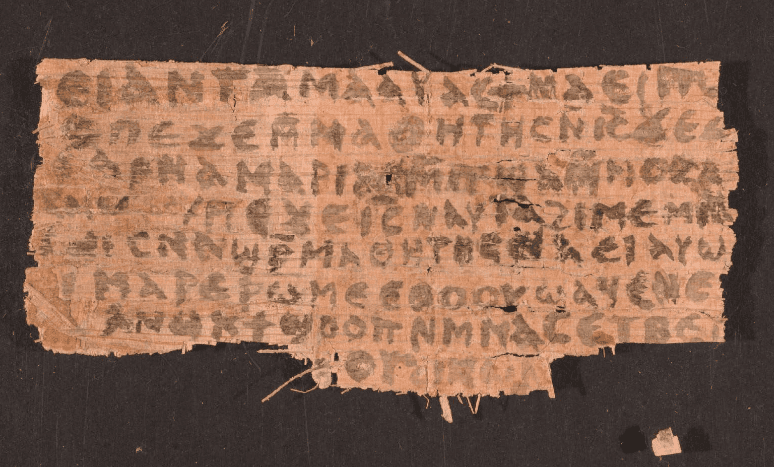