Welcome to The Observer Innovation section’s new interview series, Changing the World. Every week, we talk to an innovator, entrepreneur, and/or company that is making the world better through science, business, and technology.

There is a long list of reasons why the COVID-19 pandemic has devastated the United States exponentially more than any other country, with politics, demographics, and economics each playing a part in the disaster. Together, they have conspired to hobble science and the medical infrastructure necessary to combat the viral outbreak, creating a situation in which COVID-19 testing is so rare, expensive, and delayed in some states that it is almost worthless. In many cases, test results take nearly two weeks to come in for those who are potentially infected, allowing for unfettered transmission.

With over 180,000 deaths thus far in the United States, at least 1000 more people dying every single day, and positive rates still soaring, the emergency is ongoing, to the point that it has become terrifying background music.

Scientists and doctors have scrambled to find solutions to close the gap. On Friday, the Trump administration bought tens of millions of rapid tests from Abbott Labs for high-risk populations, with the hope of rolling them out this fall. But given the rate of asymptomatic carriers and the equal-opportunity nature of the virus, that will still leave over 100 million Americans untested and vulnerable as the country works to recover and restore some normalcy to a devastated economy.

Ongoing monitoring seems to be the ultimate solution for detecting the virus and controlling the pandemic’s spread. NeuTigers, a company spun-out from Princeton University, is close to finalizing a digital solution for real-time testing with its Covid-Deep sensors and software. The company has developed a non-invasive artificial intelligence program that it says can identify COVID-19 with up to 99.6 percent accuracy using just an advanced smartwatch, and when ported over to an Apple Watch, it can still detect it with upwards of 95 percent accuracy.

We spoke with NeuTigers’ CTO Vishu Ghanakota about the development of the technology, its progress and promise, and the goal to have it available within the next month at a very low price.

This project began long before COVID-19 hit. What was its origin?

They were able to come up with an algorithm essentially inspired by how the human brain works. When we are toddlers, we have a whole bunch of neurons. In fact, we have more neurons when we are toddlers than when we are old. What happens is that as we engage with the world, as we experience new things, the connections get formed. And everything else, the neurons that failed to form connections get pruned away.

This team at Princeton turned around the conventional wisdom and said that’s not how the human brain works. The human brain has only six or seven layers and it is still remarkably accurate in various different tasks. The human brain is able to connect across different layers and they came up with an algorithm to essentially digitize human brain function. They have several algorithms that can not only reduce the size of the neural networks, but they’re also remarkably accurate. And they’re still able to shrink enough that it can run on sensors, watches, mobile devices, and touch.

See Also: A COVID-19 Vaccine May Get Fast-Tracked, But Reinfection Poses New Risk

The project’s origins were in developing a model for diagnosing mental health and diabetes. We still have those models and we can launch validation studies. In fact, we were able to do that before the virus outbreak began. It’s probably going to be even more significant for mental health patients following the outbreak, because the pandemic is impacting a lot of people in several different ways.

This is such a new, novel virus that’s still being studied—how did you so quickly find a way to test for it this way?

The data came from the heart of the virus outbreak in the Lombardy region in Italy. So we essentially had an arrangement with a hospital where we attach a digital sensor, a smartwatch in this case, to the patient. The smartwatch had sensors for GSR—galvanic skin response. It has sensors for its skin temperature. It has sensors to measure your heart rate. And on top of that, we also added blood pressure and pulse oximeter to measure oxygen saturation.

We followed the strict standards of medical trials. The number one thing that goes into machine learning is data. So we had doctors in the hospital test these patients and assess them for their symptoms and label their COVID status. And then we also collected the sensor data from them. And so we put those together and turned them into a neural network.

How long did this take?

We needed to go through the Institutional Review Board approval, which is ethical committee approval. We don’t collect any personal information about the patient, it’s not really relevant to the model. We’re not intrusive, we don’t put any needles in patients or collect blood samples, since it’s not relevant to the model. Then we spent two months collecting the data from about 100 patients in various locations and then did analysis to come up with this model.

COVID has many symptoms in common with other illnesses, so how do you know you’re detecting that virus versus some other similar illness?

We are able to distinguish between a healthy person, someone who appears to be healthy but is asymptomatic and still able to carry the virus, and someone who actually has obvious symptoms with the virus. And we can determine that it is specifically COVID. It turns out that this virus has a unique signature of how it impacts the body and the sensors are able to pick up that data as well.

And all of this can be done on something like an Apple Watch?

The watch that we used for developing a model has a specific research-grade watch that has all the sensors, typical smartwatches available in the market don’t have all the sensors. So we developed, essentially 10 different combinations of models with various levels of accuracy over 90 percent so if you don’t have a GSR galvanic skin response sensor, if you just have a typical smartwatch that has skin temperature or a heart rate monitor, we can deploy the model.

You wear the watch, launch the app on the mobile device, and then we are able to collect the data. It only takes about 15 to 20 seconds of data collection for the models to predict your status.

And what if people don’t have smartwatches? How do you make this even more scalable?

If they don’t have smartwatches, they still have access to blood pressure. Most people have access to some kind of blood pressure machine—you can go to your local CVS, for example, and get a blood pressure reading. And then a finger pulse oximeter, something you can get on Amazon for $20. And just the combination of these two and a brief questionnaire about your symptoms can get us 95 percent accuracy.

So when does this hit the market?

It was developed with data from patients in Italy and Italian ancestry, so we want to make sure that the same data accuracy holds for people with different ethnicities and different financial backgrounds, etc. So we launched validation studies. It’s being run in several places right now. We have one in Paris, one lined up near Geneva, one in North Africa, another in Japan and yet another in India.

We’re working on the app in tandem. We’ll be launching in a matter of weeks. We’re working out the pricing, but it’s going to be a lot cheaper than any swab or any other test available. It’s less invasive and it’s continuous, as well. 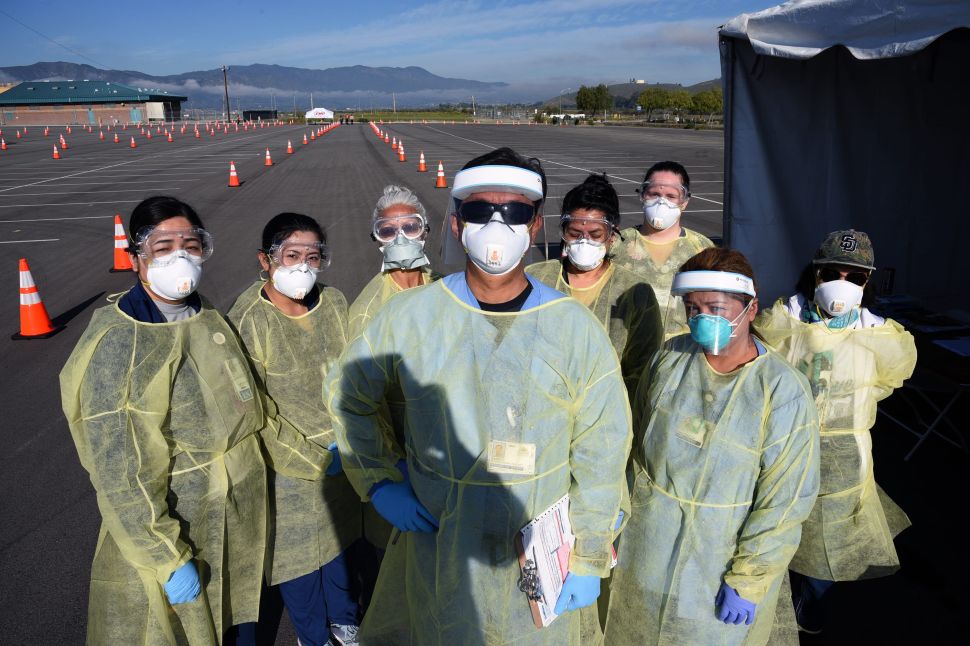