HBO’s Betty, created by Crystal Moselle, follows a group of real-life friends and skaters-turned actors. In a coming of age series about womanhood and feminist solidarity in the skating world, Betty portrays how skating, a sub-culture built on rebellious non-conformity, mimics the patriarchal world beyond.

In the opening scene, Kirt (Nina Moran) skates down the street with her bottle of Arizona iced tea, antagonizing pedestrians and riding skillfully in between cars. Her skateboard is a means of transport blended into the sea of yellow NYC cabs, until she Facetimes Janay (Dede Lovelace) rushing her to get to the skatepark on time. We hear a skid, a car hoot and swearing. But when Kirt comes back on the phone, she’s unbothered, “Yeah I’m okay, just come bro, you’re taking mad long.” Just another day as a skater and as society would deem her—a menace.

They’d organized an “all-girls skate sesh,” but when they show up to find nobody there, Janay complains that Kirt hadn’t posted about it early enough. In the crowded park full of male skaters, they see only one other girl, Honeybear (Moonbear), a quirky but quiet skater with a camera around her neck. When another, Camille (Rachelle Vinberg), appears, the girls mistakenly think she’s shown up to join them. But she’s with a group of boys who snarkily make comments that she should skate with the girls. She laughs with them and skates off. Later in the series, we see how she deals with the subtle and blatant sexism from those boys. She’ll come to need Kirt, Janay and Honeybear, and she learns the value of being in a group of women skaters.

While the show is based on the lives of these young women hanging out and skating, “bro-culture” subtly undermines them throughout. As they go through the ups and downs of some of the more serious themes, their breakthrough is when they realize that they have more power together.

We also see how they are gendered in all aspects of their lives outside of the skatepark, as they are harassed while walking in the street or put in uncomfortable positions by men. A steady flow of conversations throughout the show flow between light-hearted and complex as they chat through everyday encounters and thoughts. Janay recounts being harassed by her high school’s bus driver. To which Camille responds, “That’s why we have boards, so we don’t need to take the bus, we don’t have to talk to anybody. We just hop on a board and we’re out.”

Janay is also confronted by a truth she hadn’t yet come to terms with. When another woman accuses her best friend and ex, Donald (Caleb Eberhardt) of sexually violating her, she is faced with the fact that he did it to her too. But her confrontation with him is laced with the messy realness of having to accept that someone you love is your abuser. Although he gaslights her into confusion, with time she finds her voice and uses it with power, drawing a clear boundary and ending their relationship.

Betty doesn’t shy away from the issues that all diverse groups of friends have to navigate. Kirt’s whiteness is called out when her Black friends are arrested after she escalated a situation. She assumes that her carefree recklessness is part of being in the misfit world of skating. We see her breaking rules and aggressively confront people without consequence, she sees it as fighting the patriarchy, while her friends know it to be white privilege.

The chemistry between the actors is palpable and the fact that they were real life friends and skaters before makes for an effortless dynamic. Moselle, also a documentarian, first met the girls on the subway. Overhearing their conversations, she was mesmerized by their style and charisma. After starting up a conversation with them, she realized she wanted to film them, and later cast them, all untrained actors, in Skate Kitchen, an award-winning film about the lives of these skaters. Betty grew out of that film because of the love for the characters and their story; people wanted more.

In Betty the show comes full circle in the final episode, when the girls decide to attempt another, better advertised “all-girls skate sesh.” They print and spread flyers around the city, and in a hilarious scene, Tony Hawk makes an appearance as Kirt hands a flyer to the woman sitting next to him, telling him he can’t join. This time a huge number of women show up to the skate park, in all the diversity of girl and womanhood. The visual is cathartic, they disrupt the male-dominated skatepark just by being present. And in the powerful final scene, they skate together through the city, embodying the freedom that skating brings them, and reclaiming the site of their continuous harassment—the streets.

Betty is available to stream through HBO and HBO Max, Now and Go 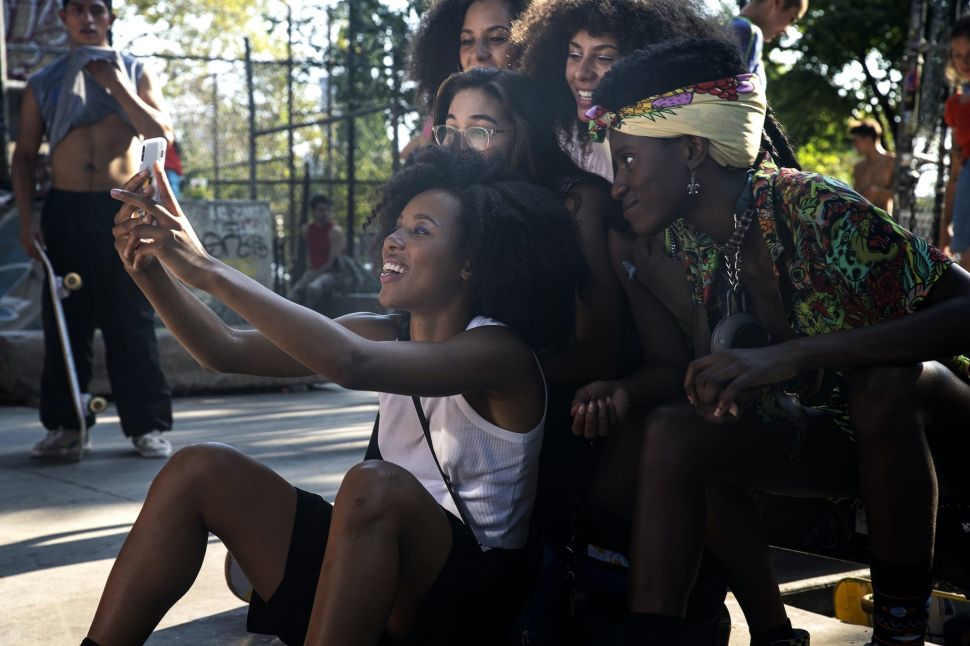