It’s one of the most unforgettable stings in any blockbuster released in this millennium, and I distinctly remember seeing it in a packed theater the night that Inception was released more than 10 years ago. At the end of a long, time-dilating heist through the recesses of a billionaire’s unconscious, the hero Cobb (Leonardo DiCaprio) had emerged victorious and emotionally intact, if not exactly emotionally whole. The Hans Zimmer orchestra swells as he returns home to his children accompanied by his father and mentor Michael Caine, his fight finally won. Cobb spins the top he uses as his totem to remind himself he’s not dreaming—then he sees his kids’ faces and rushes to meet them.

For 10 years, Inception‘s ending has inspired video analysis, burning questions, cryptic answers, meticulously rendered infographics and spirited debate about the nature of authorial intent all to answer the crucial question: was the end real or was it all a dream?

Michael Caine gave something of an answer in 2018, saying that when Nolan had given the actor his script for his supporting role in the film, the director had apparently told him that “Well, when you’re in the scene, it’s reality.” And several internet sleuths have published videos picking apart evidence that Cobb is either not dreaming or is dreaming, theorizing as to the significance of the spinning top (and how it was once not Cobb’s totem, but the totem of his late wife Mal), the significance of the fact that Cobb’s wedding ring on his left hand appears in dreams, but not in his waking life in the real world and the possibility that Cobb could be in another person’s dream entirely.

Nolan himself seemed to weigh in, without giving a definitive answer to the question of whether Cobb was dreaming or not, in a speech to Princeton University graduates in 2015 about the nature of reality versus dreams. In the speech, Nolan pushed back against the concept, familiar to college graduates, that reality plays second fiddle to the allure of dreams. Nolan, in that context, used Inception to encourage them to chase their reality.

“The way the end of that film worked, Leonardo DiCaprio’s character Cobb—he was off with his kids, he was in his own subjective reality,” Nolan said. “He didn’t really care anymore, and that makes a statement: perhaps, all levels of reality are valid. The camera moves over the spinning top just before it appears to be wobbling, it was cut to black.

“I skip out of the back of the theatre before people catch me, and there’s a very, very strong reaction from the audience: usually a bit of a groan,” Nolan admitted. “The point is, objectively, it matters to the audience in absolute terms: even though when I’m watching, it’s fiction, a sort of virtual reality. But the question of whether that’s a dream or whether it’s real is the question I’ve been asked most about any of the films I’ve made. It matters to people because that’s the point about reality. Reality matters.”

All of which feels like quite the inspiring convocation statement from one of Hollywood’s top directors whose finale in question was famously cryptic. The message of his speech appears to be that it matters less that Cobb is awake or dreaming and more that in his “subjective reality” Cobb did not care that he was or wasn’t. He runs over to hug his kids.

And yet… the film doesn’t end on Cobb hugging his kids. It ends on the pan. It lingers on the top and zooms in on it, wobbling endlessly, like a perpetual motion machine inviting perpetual interpretations. Nolan seems to understand that regardless of his own authorial intent with the film’s finale, its audience appeal is in the conversation it started, which will never end. 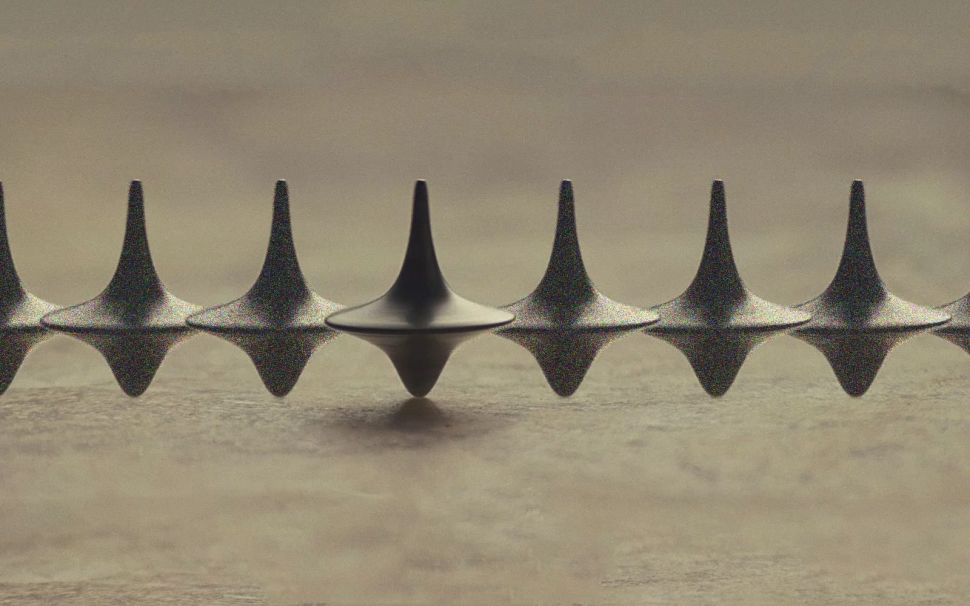