Almereyda adds modern elements to Tesla in unexpected ways. At one point of the film Edison is at a bar looking at an iPhone, Ann breaks the fourth wall to talk about Google searches, and Tesla sings Tears for Fears’ “Everybody Wants to Rule the World.” As unexpected and bizarre as these anachronisms might seem, Almereyda seamlessly incorporates them into the period piece. At the film’s world premiere Almereyda said he was inspired by Derek Jarman, Henry James and “Drunk History.”

Observer: How did you get involved with the project?
Kyle MacLachlan: Michael Almereyda spoke to me about playing Edison in Tesla for over a year. I didn’t know that he’d had the script for a long time. He was trying to assemble it and put it together. As you can imagine, in the independent film world, that’s pretty challenging. I was really intrigued by the idea of playing Edison and that not only would the research be fascinating, but it would give me a chance to return to work with a group that I really love. Michael, Ethan and I worked together on Hamlet (2000). It was one of those things where we met a few times and he would sort of float this idea. He would send me a photograph of Edison at a certain age when there was a resemblance and research books illuminating a side of Edison that hadn’t really been seen.

The relationship between Edison and Tesla is very complicated. How would you describe their relationship?
You could go down any number of paths. There’s that sort of the yin and yang of it. The most obvious one is that they have two completely different personalities with the same passion for electricity, but completely different approaches. Tesla is the proponent of AC and Edison, the DC current. This suits their personality. The DC (direct) current moves forward, thrusting, and driving. I would liken Edison a little bit to a bull moving forward. He’s just a force of nature. The AC (alternating) current does this dance back and forth. It’s more elegant and more cerebral. It’s not heading in one straight line with a goal at the end. It gets there regardless. This represents Tesla’s personality.

These two men were both heavily influenced by each other. I was very grateful that Michael chose not to make Edison the villain of the piece necessarily, which I know he could easily do. He left it open for interpretation. You see two men with vastly different personalities and intentions, striving for the same thing, but ultimately, not being able to work together or see eye to eye. It could have been an extraordinary relationship, but that would never happen given the size of the pond and the size of both men’s egos.

How did you prepare for the role? What did you learn about Edison that you didn’t know before you read the script or researched his life?
I did a lot of research. Fortunately, there are several books you can read about him, but they tend to be more of what he did, where he did it, and how he did it. The person that I was interested in embodying was less apparent. Edison wrote a diary in 1885. I got a feeling for how he saw the world differently based upon the observations that came out of the diary. They weren’t like scientific journals at all. They were sort of fanciful, imaginative writings that he did. They were highly observational. You can see that he was very conscious of his evaluation of humans and motivations. We don’t think of him as having a creative mind.

When he was trying to find the filament for the light bulb, he basically just started at one end and just kind of barreled through until he found the best thing. I loved discovering that about him. He had a softer side that we reveal during the courtship of his wife, Hannah, and the Morse code. I think it’s a moment when we see his sense of humor, which was unexpected about the man.

So there are modern elements in the film. Why do you think it was important to incorporate these elements into Tesla?
The modern elements and moments draw the connection to the influence these men still have on our day-to-day life. I also love that there are some whimsical elements there in terms of some of the scenes and the what-ifs. They’re interesting because they point up not the rivalry necessarily but that there was a sense of fun and a sense of play between specifically Ethan and I. It reminds the audience that it’s not supposed to be a boring biopic. It has some elements of surprise and keeps people on their toes. Beyond that, it’s a Mike Almereyda film and I think he has his details in the things that he does like that.

One of the appeals of the film is watching these two men who had so much curiosity about the world. I was wondering, with quarantine and coronavirus, if there’s anything that you’re indulging in or developed a new curiosity about?
I think I recognize, and you probably do the same, that finding the silver lining is essential. In this particular instance, it’s been the time I’ve been able to spend with my son, who’s 12, and my wife. We’ve discovered that we actually really liked each other and love spending time together. My wife and I have been doing a national park tour. We’ve visited Joshua Tree, the Channel Islands in California, Zion and Bryce National Park. Coronavirus allowed me to spend a lot of time working on my wine business [Pursued by Bear] that I have. So I’ve been really focused on that since we’ve since film, television, and stage have stopped.

Tesla is available on VOD. This interview was edited for length and clarity. 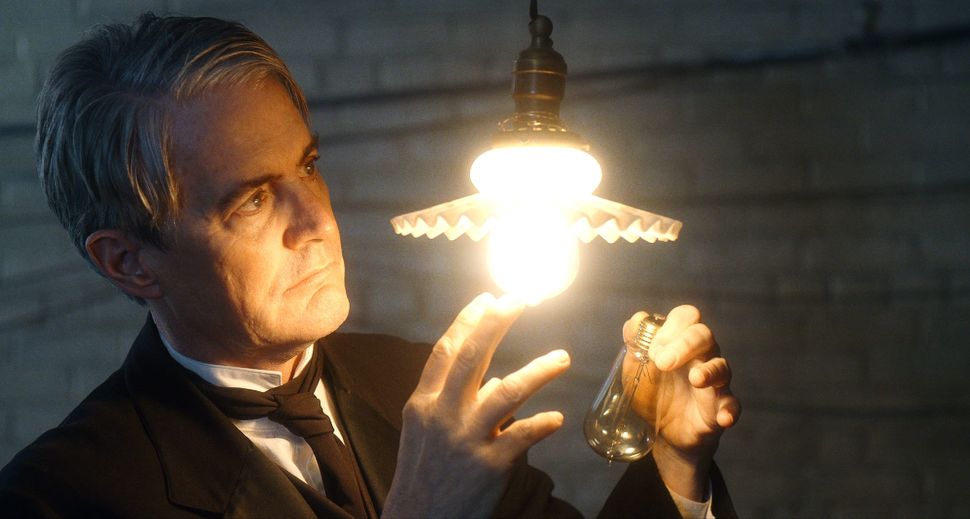