Even as galleries and museums began closing down across the city back in March, one work by the Brooklyn artist Luke O’Halloran has remained on view day and night. A painted triptych of slot machine reels—“infinite spinning wheels” he calls them—hang in the 16th floor lobby of the new Memorial Sloan Kettering building on East 73rd Street. At first he had his reservations about how his work might fit—or not fit—within the context of the hospital, but the art consultant Cade Tompkins, who made the purchase on the hospital’s behalf, assured him there was nothing to worry about. “I think her position is, if someone is dying, they’re already dying, and you’re not going to change that,” O’Halloran tells Observer. “You’re reminding them of the chance of life, and that is not a bad thing. They’re already experiencing something ineffable.”

O’Halloran’s subject matter has so far brought the artist good luck. His recent works—paintings depicting a dealt card that’s not yet found its hand, the flourish of a deck before the fix is in, slot machine cherries and lemons that could starve a gambler of their last dollar—have taken on greater meaning during the current pandemic. At first, they only signified diminishing returns on the promise of the American West, a theme rooted in the artist since childhood. O’Halloran grew up in Thousand Oaks, Calif., just up the road from Paramount Ranch, then left to earn his BFA at  the University of Colorado at Boulder.

“What fascinates me about Westerns and frontier myths is that, even at rest, their setting is uncertain and unjust,” O’Halloran says. “The landscape itself is perhaps cruel, and I like that a good story can arise out of that setting.”

Coinciding with the lockdowns across the country, the diminishing returns of Manifest Destiny have been having a moment, as the most selfish citizens believe it’s their God-given right as Americans to shop for groceries without a mask, crowd sidewalks for cocktails, or huff the recycled air of reopened casino floors before they ever place a bet, none of them understanding the most they could hope to gain is winning back their own life.

O’Halloran, an enthusiastic gambler, has been making no such bets. He’s been indoors since March, dividing his time between his two roommates upstairs and his basement studio.

“Everyone said this was the perfect time to make art but I thought, no, it’s not—the world is changing,” he recalls. His worldview improved around Memorial Day, once unemployment benefits began showing up in his account. Following the success of his shows earlier in the year (group shows at Kapp Kapp, OCDChinatown, and Y2K Group), O’Halloran knew he was going to get paid, “And then I was spending like I was going to get paid,” he says, but the pandemic relief changed everything. He convinced his roommates not to go on a rent strike, which could have cost him his studio space, and he began painting again.

Two graphite card drawings sold at charity auctions, including an Artsy auction for the Food Bank of NYC, which finally gave O’Halloran a berth on the site. The invitation came from the painter Sam McKinniss who showed his Cherries (after Fantin-Latour), 2019 beside O’Halloran’s Cherries, 2019, at O’Halloran’s invitation last December. This summer, his Card flourish painting 03, 2020, hangs over the mantle at the newly restored Mary Heaton Vorse House in Provincetown as part of the curator Joe Sheftel’s group show, “Intimate Companions.” The show, up through September 8, also includes works by McKinniss, Jenna Gribbon and David Hockney.

Right now, O’Halloran is completing works for an October solo show at Kapp Kapp’s Manhattan gallery. He’s shifting his focus to the way we gamble with our lives today. There are life-sized drawings of women sawed in half, a timely metaphor for those who are desperate to reconnect and be made whole again, and cats hanging in the air as they reach non-lethal terminal velocity never knowing whether they’ll land unscathed. O’Halloran knows there are no good solutions right now unless you’re willing to let the house win. Until then, he keeps painting against the odds. 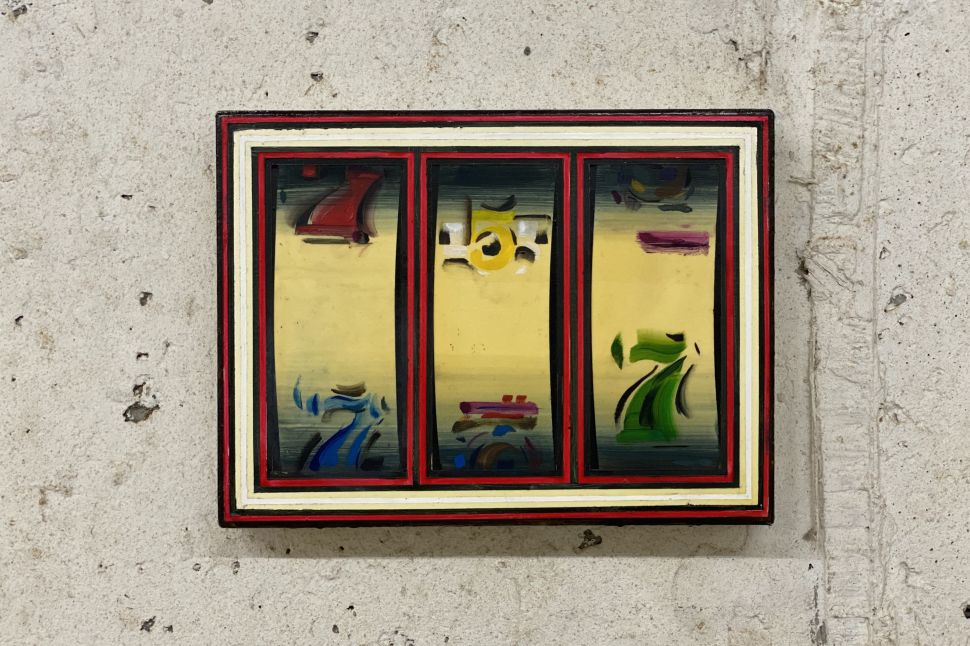