Back in the spring of 2017, all eyes were on the royally-adjacent wedding of Pippa Middleton and James Matthews. Kate Middleton’s sister might not be an actual royal, but her wedding was definitely princess-worthy, complete with a $130,000 custom glass marquee tent and plenty of regal guests, including the Duke and Duchess of Cambridge as well as Prince Harry.

Prince Harry and Meghan Markle weren’t yet engaged at the time, and Pippa reportedly had a strict “no ring, no bring” policy for the ceremony portion of her big day.

SEE ALSO: Prince William and Kate Are Still Going to Visit the Queen at Balmoral

According to Finding Freedom, the new royal biography documenting Prince Harry and Meghan’s journey, from their whirlwind romance to their regal wedding to their eventual decision to step down from their royal roles, an exception was apparently made for Meghan, and the future Duchess of Sussex had already carefully selected an outfit, complete with a Phillip Treacy hat.

Alas, tabloid scrutiny ended up changing these plans, as stories were run pitting Meghan and Pippa against each other, including one story with a headline comparing the two women’s rear ends. It was then decided that it would be best if Meghan didn’t attend Pippa’s ceremony and create a media extravaganza.

It’s understandable Pippa would want to be the center of attention on her big day—Kate’s little sister is, after all, well-versed in how a wedding guest can become the object of major media scrutiny at someone’s nuptials, since there were actual Twitter accounts created dedicated to Pippa’s backside after Kate and Prince William’s wedding. Plus, Prince Harry and Meghan were trying to keep a low profile then.

Meghan wasn’t entirely disinvited, though, as she did (quietly) attend the wedding reception instead. Prince Harry proved he was the best boyfriend of all time when he drove from the wedding ceremony in Berkshire all the way back to London to pick up his date, and then the couple embarked together on the hour-and-a-half drive from London to the Middleton estate, Bucklebury Manor, for the wedding reception, and snuck in through a back way to avoid paparazzi.

It doesn’t seem there were any hard feelings between Meghan and Pippa. Pippa and James Matthews were in attendance at Meghan and Prince Harry’s royal wedding in 2018, when Pippa was pregnant with the couple’s first child. Pippa, Kate and Meghan also all went together to Wimbledon last year, as the three women attended the Ladies’ Single Final and sat together in the Royal Box. 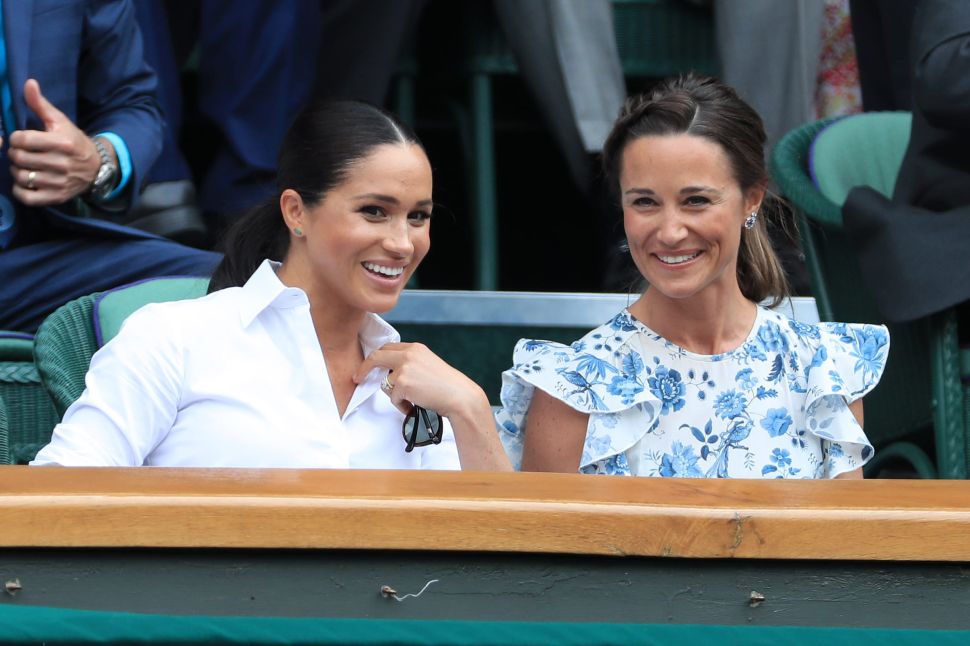