Even as the number of major streaming services continues to climb, consumer bandwidth has largely remained unchanged. Dating back to 2018, investor studies suggested that the average U.S. customer is willing to subscribe to up to three streaming services at a monthly cost of around $50. Then, according to Adobe’s recent 2020 Streaming Video Report, 60% of survey respondents said they subscribe to between one and three services. That falls right in the expected sweet spot despite a handful of new platforms launching over the last nine months.

Netflix is clearly the market-leader in the streaming industry. As both the first major adopter of direct-to-consumer delivery and the only consistent provider of fresh content in the pandemic, the service continues to grow and now stands at more than 190 million global subscribers. If Netflix were a country, it would be the eighth most-populated in the world. But they aren’t the only ones benefitting from home confinement forced by COVID-19 as lockdown has been a boon for the entire streaming industry. But the crowded streaming market is bound to create winners and losers as only capitalism can deliver.

Reelgood—a streaming aggregator that tracks every TV show and movie available online for its 2 million-plus users—compiled data on which streaming service combinations are most popular in the U.S. as of August 15, 2020. 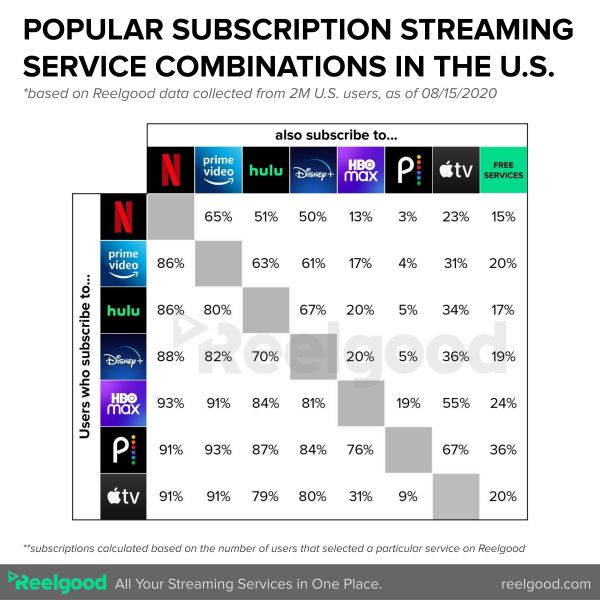 It’s worth noting that the majority of these services offer some sort of free trial or access point. For example, prior to launch, Disney+ paired with Verizon to offer a free 12-month subscription to existing customers. The telecom giant and entertainment conglomerate recently extended their pact, giving some wireless customers free access to Disney+, Hulu, and ESPN+. Apple TV+ also offered a free 12-month subscription to customers who purchased Apple products within the first year of launch. Then you have NBCUniversal’s Peacock, which is split into two tiers: a free, ad-supported package (Peacock Free) and a beefier offering at $4.99 per month (Peacock Premium). Still, despite the slight discrepancy in true blue paid subscribers, we can still gleam insights into the streaming industry.

Users may not be replacing Netflix with newer, shinier SVOD services anytime soon. Instead, they seem to be supplementing their streaming experience with an assortment of other subscriptions—chiefly Prime Video, Hulu, and/or Disney+. This gels with previous studies that anointed Netflix, Prime Video and Hulu among the best bang-for-your-buck streaming services. Their combination of attractive originals, library TV programming, and back catalog of films are among the best in the business.

The majority of Netflix users on Reelgood appear content with their existing services, as they aren’t flocking to HBO Max or Peacock Premium. However, that may still change as the two newcomers mature. Almost a fifth of HBO Max users has already subscribed to Peacock Premium as well. Among users who have Apple TV+ as a streaming service, 91% are also subscribed to both Netflix and Prime Video. However, only 9% so far have felt the need to expand their selection with Peacock Premium, and 31% with HBO Max.

Unsurprisingly, incumbents such as Netflix, Amazon Prime Video and Hulu fare well while Disney+ is seemingly the only newcomer that is indisputably thriving. If consumer habits hold steady and the average customers stick with up to three streaming services, it will be interesting to see who the final platforms standing will be once the newcomers are given more time to develop their libraries. 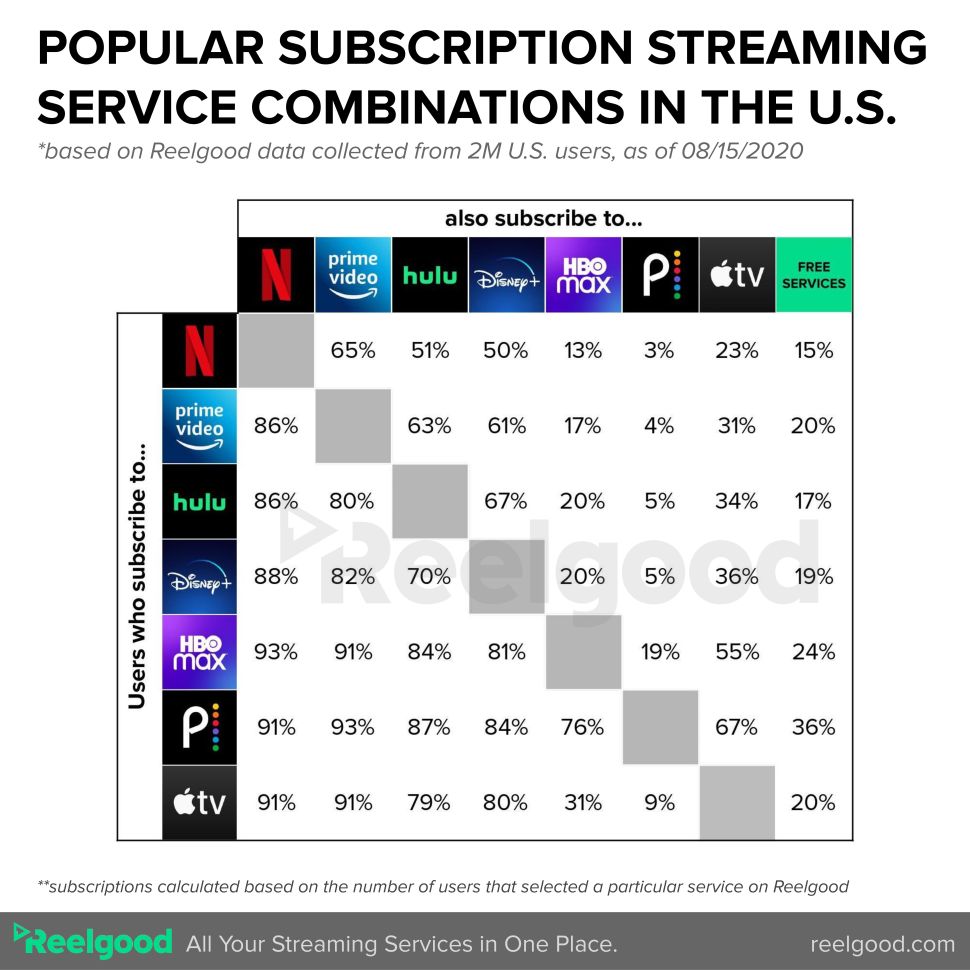