For New Yorkers, one of the most fundamental pleasures we’ve been denied over the course of a very restrictive summer has been the ability to visit an art museum or gallery without the spectral fear of potentially contracting COVID-19. Fortunately, there are a number of exemplary outdoor art spaces in the area that are either currently hosting or about to launch wonderfully engaging exhibitions for every taste or inclination. Whether you bask in Jeffrey Gibson’s contemporary vision of indigenous civilization at Socrates Sculpture Park or finally make the trip up to Storm King you’ve been putting off, you can savor the last vestiges of summer in an environment that makes you feel comfortable.

Inspired by the ways in which bells can symbolize a traditional civic role in that they call a community to attention, the artist Davina Semo has been working with bronze bells since 2016. Her creations feature unique configurations of holes so that when each bell is rung by a spectator via a corresponding foot pedal, it will make a noise that’s different from the bell next to it. In mid-August, Public Art Fund will install five of Semo’s four-foot-tall bells at Brooklyn Bridge Park’s waterfront, where attendees will be encouraged to use them to make their own music. Given how isolating this summer has been, there’s something particularly encouraging about an outdoor art installation that invites audience participation.

Jeffrey Gibson’s Because Once You Enter My House It Becomes Our House at Socrates Sculpture Park, now through March, 2021

Gibson, a recipient of a 2019 MacArthur Foundation “Genius” grant, creates artwork that speaks directly to the history of Indigenous cultures of the Americas. Specifically, Once You Enter My House serves as a hypnotically hued homage to the architecture of the ancient metropolis of Cahokia, which, at its height in the thirteenth century, was the largest city built and inhabited by the North American Indigenous Mississippian people.

Way back in May, Rockefeller Center launched a call for submissions to the Rockefeller Center Flag Project; an exhibition intended to showcase the creativity of New York City residents who want to celebrate their city in the midst of the coronavirus. Now, the amateur artists have been selected, and as part of the Flag Project, the 192 flagpoles around the Rockefeller Center rink that usually bear nation’s crests will be replaced by hand-drawn and digitally-drawn submissions by New York City residents. Additionally, flag designs by mega-famous artists including Jeff Koons, Hank Willis Thomas, Marina Abramović and KAWS will be flown.

Storm King Art Center has been one of the most iconic outdoor art spots in the country since its inception in 1960, but due to the fact that the coronavirus has forced everyone to put on a mask and spend as much time outdoors as possible, it’s become a bonafide must-visit destination. Thus summer, Storm King is introducing a new exhibition from Kiki Smith. River Light consists of nine flags bearing images from a film Smith made in 2005 of sunlight dancing on the East River; a canny transposition of beauty from one spot to another.

Martha Tuttle’s A Stone That Thinks of Enceladus at Storm King, now through November 9

Giving you the ability to kill two birds with one stone is Martha Tuttle’s submission to Storm King’s Outlooks program, in which the art center provides an emerging to mid-career artist with the chance to realize a large-scale, temporary outdoor project. Tuttle’s multi-acre piece, A Stone That Thinks of Enceladus, consists of a series of stone cairns upon which the artist has placed approximately 200 glass or marble stones that she made by hand. By creating an inflection point between the more “natural” stone cairns and the manufactured miniature stones, Tuttle’s intention is to point viewers towards contemplation of their materiality and inner vastness. 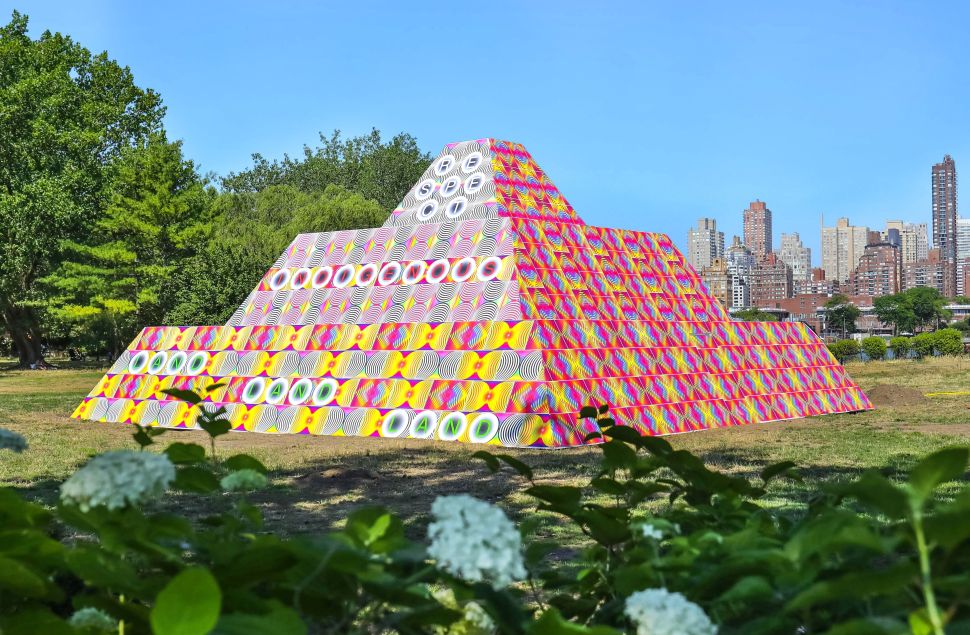