Last week, after more than 70 years, the U.S. Department of Justice’s push to terminate the Paramount Consent Decrees was granted by a New York federal judge. The Paramount Consent Decrees have served as the film industry’s long-running licensing governance. Enacted in the late 1940s as an antitrust effort against film studios, they were meant to break up the vertically integrated models of the time in which film studios worked in tandem with national theater chains to control production and distribution. The Decrees mandated that major film studios—specifically Warner Bros. and Paramount—divest themselves of exhibition holding. Although the rules did not cover studios that would grow into major players, such as Disney, the industry widely adopted these regulatory guidelines across the board.

Beginning last November, the DOJ has been pushing to terminate the decrees in a sweeping nationwide effort emphasizing deregulation. As with any major innovation, there are potential upsides and prospective consequences to this move, which is now moving full steam ahead.

“The structure of the market, absent the Paramount Decrees, will go back into that kind of abusive behavior that the Decrees were designed to prevent.” -Patrick Corcoran

“The DOJ needs to actually look at the market and see what effects removing the decrees has, and what effect leaving them in place has had,” Patrick Corcoran, Voice President and Chief Communications Officer of the National Association of Theater Owners (NATO), told Observer. “The idea that more competition would flourish—well, that’s already happening. We’ve seen huge innovation and changes over the last 30 years, such as the rise of Netflix, with the Consent Decrees in place. The structure of the market, absent the Paramount Decrees, will go back into that kind of abusive behavior that the Decrees were designed to prevent.”

One reason Corcoran argues that the industry still needs the Paramount Consent Decrees is pure economics. More than 90% of the revenue generated in the film industry comes from seven distribution companies, five of which are major studios. With Disney acquiring Fox, Viacom and CBS re-merging, AT&T gobbling up Time Warner and further consolidation on the horizon, this becomes more vital to the health of the business. The fear is that block booking, a system of selling multiple films to a theater as a unit that was outlawed after the 1930s, will return with the removal of the Paramount Consent Decrees. For example, Disney could theoretically demand that in exchange for the latest Marvel blockbuster, exhibitors will also have to agree to run three other Disney films.

In turn, this may offer less overall choice to consumers, Corcoran argues. There already exists a blockbuster mentality among moviegoers, but there were roughly 700 films distributed nationwide lest year. Some of these were small indie pictures distributed in small factions of the country. This becomes more difficult if the studios can dictate what theaters are putting on the screens, which will presumably lead to less room for indie titles. There is a concern at NATO that independent theaters will be squeezed out of existence and the market will become too homogenized with less access to smaller titles and less access for smaller companies.

“The removal of the Paramount Decrees will only exacerbate the market power that Netflix and Disney have over creative distribution already.” -Paul Jun

“Not every studio is bound by the Paramount Decrees,” Corcoran said. “But what they’ve done is set up customs and rules of the road, created a market that has limits to how much power any one distributor can exercise. And that’s been beneficial. The Department of Justice is saying competition will increase and it will be better because we say so. But if you look at it over time, you’ve seen the growth of lots of companies that didn’t exist at the time of the Paramount Decrees. We’ve gone to multiplexes, stadium seating, recliners, now restaurant and bar service. It’s working.”

Prior to the coronavirus pandemic, Disney and Netflix were arguably the two most powerful media entertainment conglomerates on the planet. While Disney has stumbled as a result of COVID, Netflix has continued to thrive, adding 26 million new subscribers over the first half of 2020. There is a concern that the removal of the Paramount Consent Decrees will increase the gap between the perceived Haves and Have Nots of the industry.

“The removal of the Paramount Decrees will only exacerbate the market power that Netflix and Disney have over creative distribution already,” Paul Jun, CEO of Filmocracy, an independent movie streaming service. “As Congress has repeatedly turned a blind eye towards monopolization, Disney in particular has done an excellent job of consolidating valuable content into one global brand.”

As technology companies continue to turn into media companies, there exists an expectation of greater merger and acquisition potential among the big five (FAANG), who will attempt to consolidate power by purchasing distressed theater chains. Thanks to the pandemic, rumors of Amazon acquiring AMC have consistently cropped up this year. Hypothetically, in a post-Paramount Decree world, what’s to stop Amazon, Netflix and Disney from acquiring the majority of U.S. theaters?

It doesn’t make much financial sense for streamers, who will continue to put films on their online platforms, to invest in theatrical chains. It’s also a cost-prohibitive brick-and-mortar operation for studios and, as the pandemic has proven, leaves them leveraged to outside forces beyond control. Major studios are also not yet equipped for customer service and retailing operations that exhibition requires. Most importantly, we’re seeing Disney and WarnerMedia pivot to a direct-to-consumer focus with multi-billion bets on Disney+ and HBO Max, respectively. This suggests that perhaps major theaters won’t be in the market for thousands of movie theaters after all.

NATO’s position is that studios will benefit much more by offering movies to a wide range of movie theaters at competitive terms. Studios not covered in the Paramount Consent Decrees have been free to acquire theaters all along and have mostly stayed out of the business for a reason.

“Instead of thinking of movie theaters as older institutions, what if it was an entertainment-based destination where there are games and food? Dave and Busters multiplied by twenty.” -Christopher Hamilton

Still, the termination of the Paramount Consent Decrees is the result of a consistent emphasis on deregulation across various sectors of business. It’s consistent with the economic policies of the last 20-30 years, according to Professor J. Christopher Hamilton, an assistant professor at Syracuse’s S.I. Newhouse School of Public Communications with a focus on television, radio, film and interactive digital media who previously worked at Lionsgate, Turner and Viacom. He sees potential value in opening the doors to innovation across the film industry.

“A company like Google or Amazon owning a theater chain presents a whole new proposition for consumption and engagement of their consumers,” Hamilton told Observer. “Instead of thinking of movie theaters as older institutions, what if it was an entertainment-based destination where there are games and food? Interactive theatrical experiences? Imagine a mini-Disneyland where families can go, or just think of Dave and Busters multiplied by twenty.”

Amazon owns popular video game streaming app Twitch and could use the theaters to not only show movies but also international gaming events, which appeals to younger demographics not currently engaging in traditional theatrical experiences. Disney has the potential to provide a combo Disney Store + Theater experience, not to mention their ownership of ESPN and the ability to play live sporting events on huge screens. However, this underscores the reality that independent companies without the benefit of added value will likely be forced into selling out to one system or another. The opposition, however, argues that independent films represent a much smaller portion of the overall market and that the Paramount decision was not intended to put limits on the entire industry based on a small percentage of the overall market.

The theatrical model—usher herds of people into a dark room as many times as possible—has remained largely unchanged for decades. The potential benefit of change is that a consumer can experience all the various mediums and innovations when it comes to content delivery.

“One thing that makes it difficult for the major conglomerates to compete in any area of business is their rigidity and their bloatedness,” Hamilton told Observer. “It’s like moving an ocean liner, and they’re slow to do that because the structure doesn’t allow for that kind flexibility. The upside of this change is potentially finding a way to design a new system that captures the Gen Zs and millennials, who grew up continually connected to devices, that aren’t being represent in the traditional theater-going experiences”

“The antitrust concerns are mitigated by these new distribution methods in which digital content is released and more quickly becoming available on online platforms.” -David Reischer

Still, a major concern is that with companies growing so large and controlling every aspect of the supply chain, it enables them to control prices. As such, the average everyday moviegoer may not see a decrease in admission prices. Unless, of course, the proliferation of streaming forces traditional theatrical costs down. The idea of competition breeding better conditions for the consumer is the driving factor behind deregulation.

“The rise of box office sales is overshadowed by the rise of digital distribution platforms that makes it much easier for consumers to find and download digital media on online platforms,” David Reischer, Attorney & CEO of LegalAdvice.com, told Observer. “The effect of this trend, which is likely to continue to grow, is that there are more methods than ever for the distribution of digital media content, and consumers directly are benefiting from this new distribution method. The Paramount decision is obsolete because the antitrust concerns are mitigated by these new distribution methods in which digital content is released and more quickly becoming available on online platforms to provide consumers with more choices.”

Reischer argues that the Paramount Decrees should no longer apply due to the advent of robust and burgeoning streaming technologies. The plethora of streaming services that now exist in the marketplace in recent years allow for consumers to access content like never before in history. As the number of viable delivery methods grow, the hope is that prices will indeed come down.

“A deregulated environment in which antitrust restrictions surrounding the ownership of both production and distribution businesses are relaxed is good for both the technology and the entertainment industry,” he said. 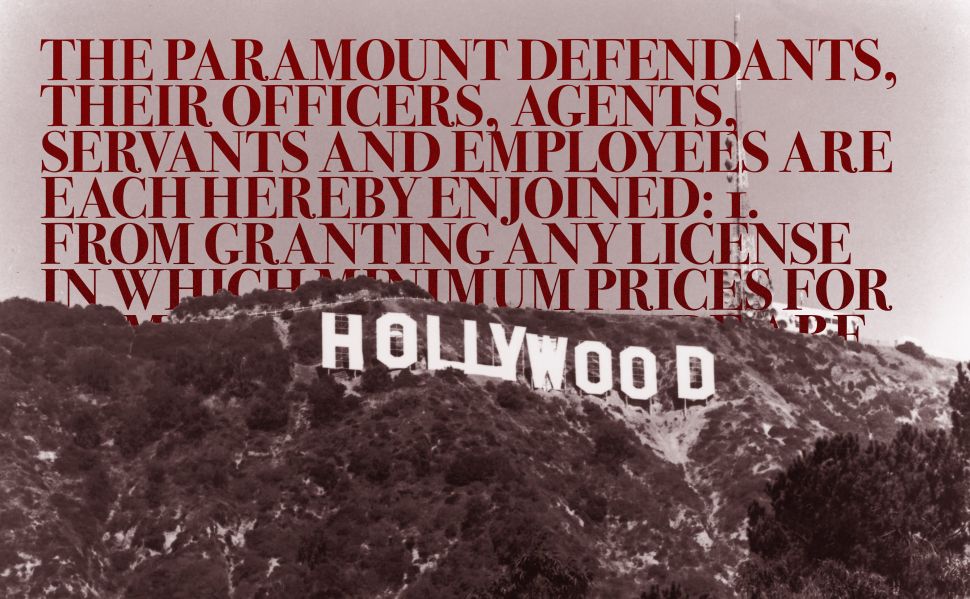