Igor Stravinsky’s 1951 The Rake’s Progress, his only full-length opera, manages to the both accessible and thorny all at once. Its Neoclassical musical vocabulary is winkingly Mozartian and its libretto by celebrated poets W.H. Auden and Chester Kallman uses richly ironic verse to sift and infer a narrative arc from William Hogarth’s series of eight paintings-cum-engravings that detail the rise and ruin of fictitious English spendthrift Tom Rakewell in Georgian London. But even for a new listener, this masterpiece yields its greatest pleasures when its arch aesthetic and absurdist philosophical underpinnings are embraced, interrogated and decoded. And the iconic 1975 production from the Glyndebourne Festival, restaged in 2010, is available for streaming through Sunday, showing that making sense of The Rake’s Progress is both easier and more rewarding than it might sound.

The opera is practically in Glyndebourne’s DNA—thespian and festival co-founder Carl Ebert served as the director of the first-ever Rake’s Progress at the Venice Biennale and mentored John Cox, whose production is seen here in a pristine 2010 revival. However, its greatest innovation is its stage design, executed entirely and meticulously by English artist David Hockney, which sources the visual world of the opera entirely from Hogarth’s prints.

Working within a limited color palette of black, white, red, blue and green, Hockney renders every set, costume and prop using the bold and crosshatched lines of the etchings. And when the stage is populated, both the prints and the lore that the composer and librettists cast onto them come alive. The effect augments the elegant restlessness of the score (so energetically and precisely given voice here by conductor Vladimir Jurowski) and answers back to the libretto’s sarcastic philosophizing. The bold lines both affirm and challenge the opera’s backwards-looking aesthetic—they are immediate, clever, eminently modern and visually striking.

The singers uniformly rise to meet the challenge of inhabiting the opera’s spaces and times, with Finnish tenor Topi Lehtipuu leading the pack as the titular rake. His Tom, sensitively acted and sung with cleanly drawn Mozartian ardor and ringing high notes for the entirety of the marathon role, reads as a reluctant but abstruse libertine from the first scene. It only takes the intervention of Nick Shadow, a stand-in for the devil posing as a valet, to tempt Tom to London and away from the angelic Anne Trulove in pursuit of an inheritance. Bass Matthew Rose as Nick, though sometimes a bit pedantic in his villainy, is equal parts devilish and demonic in his persuasion with a voice both suave and forceful.

While Tom is gradually corrupted by the profligate immorality of London, Anne waits patiently at her father’s country home before finding the resolve in herself to track down Tom and rescue him from peril. It’s the opera’s most famous moment and a glorious showcase for soprano Miah Persson whose cool, pliant voice spins silky musical filaments out of the scene. Anne departs, and upon arrival in London, she is devastated to learn that Tom has renounced her and instead taken an illustrious but mercurial bearded-lady sideshow performer, Baba the Turk, as a wife. Elena Manistina’s vinegary tone somewhat undercuts the imperiousness that can make Baba such a scene-stealing role, though her sound remains resonant and she wields her beard with style.

Ultimately manipulated into his most irresponsible behavior by Nick, Tom ends up destitute, then hospitalized in the famous Bedlam asylum as Anne looks on, mournful and powerless. But right as the curtain falls on his pitiful death, the characters spring to life again to deliver the piece’s moral directly to the audience: “For idle hands and hearts and minds, the devil finds a work to do.” It’s a philosophy that invites criticism; it’s a little Puritanical for one and two, it doesn’t resonate as well in times of tedious self-quarantine. But such critiques, asked by both by the creators and the audience, remain firmly within the spirit of the piece and make The Rake’s Progress the provocative and progressive classic that it is. As is always mysteriously the case with an opera now approaching 70, the old has never felt so new. 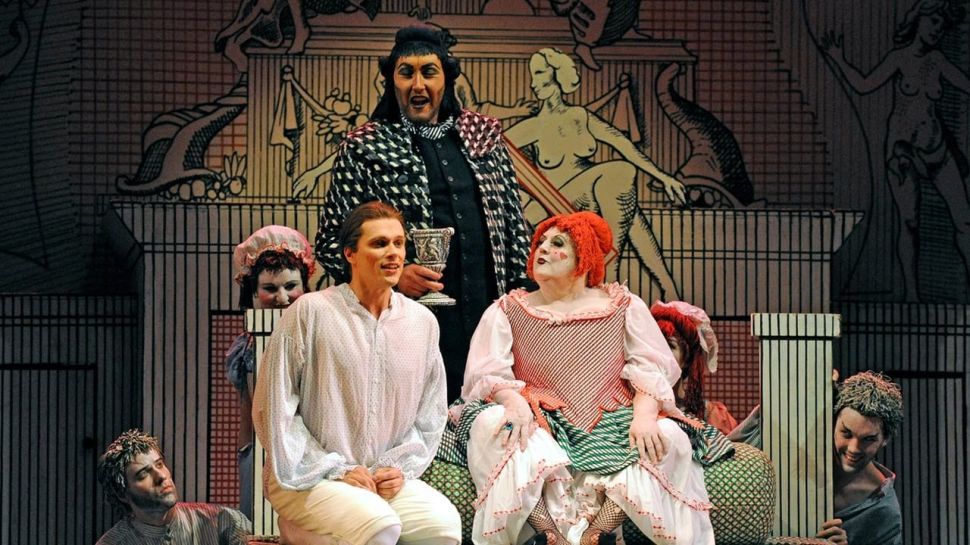