The Met’s recitals premiered two weeks ago with matinee-idol tenor Jonas Kaufmann. While he’s one of today’s superstars, some wondered about the invitation to Fleming who hasn’t appeared in opera in over three years. However, a cannily timed, effusively worshipful profile of “America’s diva” by New York Times editorial writer Maureen Dowd appeared in the paper’s “Style” section two days before her Saturday afternoon recital and was surely aimed to reassure any doubters. The article’s big news was that Fleming would return to the Met in 2022 for the world premiere of The Hours by Kevin Puts.

SEE ALSO: Opera Returns to the Salzburg Festival, Chic and Expensive as Ever

The Met was clearly hoping that Fleming’s long-standing star power would convince its public to plunk down $20 for a 75-minute concert ably accompanied by Robert Ainsley beamed from the sumptuous if forbiddingly dark music salon of the Dumbarton Oaks estate near Washington, D.C.

Unlike Kaufmann’s dozen operatic showstoppers, Fleming’s wide-ranging program rigorously conformed to a traditional recital format with baroque excerpts followed by French, German and Italian groups. Most were well-chosen to showcase the soprano’s trademark “beautiful voice,” an instantly identifiable richly creamy soprano still in fine condition at 61 and as ever more at home with melancholy than joy.

A forgettable maudlin setting by John Corigliano of the insipid viral pandemic poem “And the People Stayed Home” got the afternoon off to a jarring start. Her Handel set began pleasingly with Cleopatra’s mournful air from Alexander Balus, but Samson and Semele excerpts praising pleasure revealed bumpy coloratura. The sparkling first song from Cantaloube’s Chants d’Auvergne fell flat but the wistful “Baïléro” that followed encouraged Fleming to revel in her dreamily floating legato and several decades instantly melted away.

The most serious blot came near the end: a painful “Over the Rainbow” riven by a misguided soulful jazziness. But Fleming rescued the afternoon concluding with a wonderfully comforting “Wiegenlied” aka Brahms’s “Lullaby.”

While Fleming performed without an audience, DG Stage offered Puccini’s beloved melodrama Tosca before an outdoor crowd in Naples. DG’s participation was assured by Netrebko, one of its exclusive artists. Unfortunately, its website offered only the slimmest information; no conductor was named and the opera was billed as being “staged at the Piazza del Plebiscito.” There were in fact no sets—only an occasional projection—and the singers in contemporary dress interacted on a bare platform in front of the orchestra and chorus.

Tosca was performed on July 23 and 26, but there was no information as to which we were watching. The very well-produced stream cost 12.90 euros (roughly $15) and was available beginning July 30 for just 48 hours; Fleming’s concert however remains viewable until August 12.

Salvatore Giannini’s spare, semi-staging did an effective enough job despite several curious miscalculations. After being stabbed, Scarpia wandered off leaving Tosca to declaim her immortal “Avanti a lui tremava tutta Roma” to herself. Later, Cavaradossi also exited, well before his execution forcing Tosca to hallucinate her horrified realization that he was dead. Even a canny a stage creature like Netrebko could not make these head-scratching moments convincing.

Juraj Valčuha, the unnamed conductor and Naples’s music director, led a sweeping, gorgeously detailed reading that neglected none of the tense drama while still lovingly accompanying his generally excellent singers. Of particular note was French baritone Ludovic Tčzier who has been absent from the Met since 2011. He eschewed the conventional villainous leering instead embodying an unusually suave yet implacable Scarpia. He observed his reluctant victim with an compelling mix of ardor and lust and marshalled the requisite vocal force to dominate the action.

Yusif Eyvazov, who is affectionately referred to on social media as “Mario Cavaradossi,” was markedly more confident than he had been in Tosca at the Met two years ago. The Azerbaijani tenor presented an unusually serious Mario, almost more preoccupied with politics than his mistress’s jealousies. While his raw timbre will never fall seductively on the ear, he has continued to refine his technique and his ringing high notes continue to thrill although his very slow doom-laded “E lucevan le stelle” stood out as peculiarly self-indulgent.

And what of this PPV Tosca’s raison d’être? Unfortunately, after personal successes in the title role at the Met and La Scala, Naples’s Tosca found Netrebko in poorish vocal form. In recent years the marked differences between the three registers of her voice have grown more troubling and here they often stubbornly refused to blend. Even her usually gleaming high notes occasionally grew thin and flew sharp. While always dramatically alert, Netrebko’s fidgety, unnuanced prima donna remained resolutely unsympathetic.

As wonderful as it was to experience an opera preformed before a reduced, sparsely masked but enthusiastic Italian audience, this Puccini didn’t make for an encouraging premiere DG Stage opera offering especially as no subtitles were provided. But whether this Tosca will be made available again is anyone’s guess. 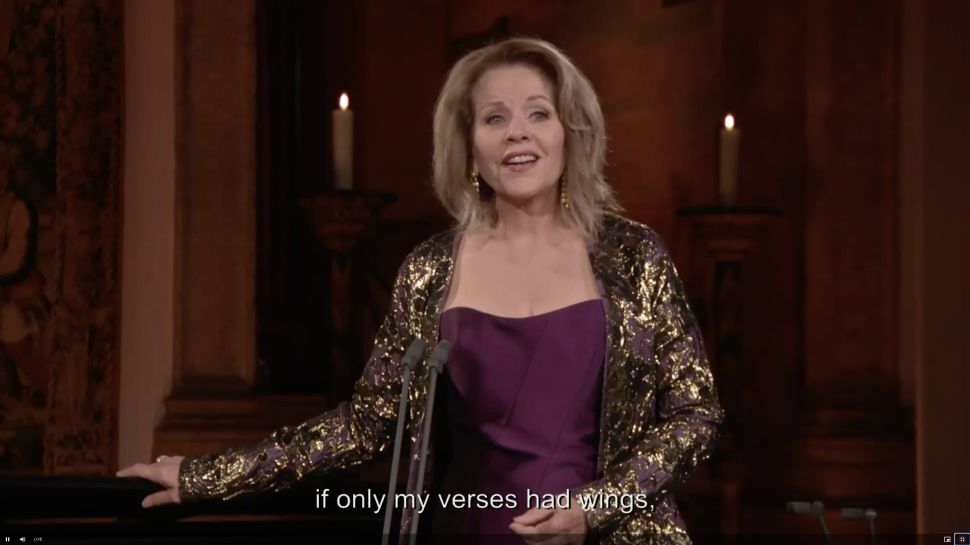