It’s only fitting that Star Trek: Lower Decks, which is wholly unlike anything you’ve ever seen in the Trek universe before, would come from the one man who may know the most about the franchise of anyone in the galaxy. Creator Mike McMahan is an über-nerd, capable of reeling off obscure alien species from Star Trek: The Next Generation as casually as you review your grocery list. His Trek knowledge: encyclopedic. His adoration for the franchise: unparalleled. So perhaps, in an odd twist of Q-induced fate, it’s entirely appropriate that all this reverence would produce a completely unexpected left-field entry in the vaunted annals of Trek-dom.

CBS All Access‘ Lower Decks, the first animated Trek series since Star Trek: The Animated Series wrapped up in 1974, is unlike a traditional jaunt with Kirk, Picard, Sisko or Janeway. For starters, as you’ve probably noticed following the first two episodes, we rarely ever cross the threshold of the bridge. Instead, Lower Decks‘ action takes place, well, exactly where you think—the low ranking, everyday grunt work handled by rookies, ensigns, and other drones of Starfleet. But what really adds the sashay to Lower Decks‘ pivot is the content. It’s a comedy with an adult tone and humor, never before seen in the immaculately polished and occasionally stodgy world of Trek. Imagine a less graphic Archer and you’re close to home.

McMahan—who cut his teeth on Comedy Central’s Drawn Together and South Park before becoming a writer-producer on Rick and Morty and creating Hulu’s Solar Opposites—is throwing together Trek lore with a sense of humor that falls somewhere in between geeky genius and drunken shenanigans. Below, he dives into the beats of Episode 2, “Envoys,” and everything we can expect from the franchise moving forward both familiar and new.

Observer: The latest episode “Envoys” opens with the hilarious trans-dimensional energy creature. Is that a being we might see again, or just a funny one-off to start the show?
Mike McMahan: It was a funny one-off. Clearly, the show has an immense amount of celebration and big cuts for fans of Star Trek in general. But usually, we also try to inject—especially in the first half of the season—a lot of doors-open embracing of new audiences that might not have 700 episodes of Star Trek under their belts like we do. So that includes the live episodes that are almost like tours of the world and of the show and of the aliens that are on the ship.

You’ll see a lot in the first couple of episodes, getting to know the U.S.S. Cerritos and getting to know the different duties on the ship. In this second episode, getting to meet live aliens. We also wanted to build in these key moments that were standalone, sort of sketched in the act, especially in the first three. There are so many times, on Next Generation and on other Star Treks, where an episode would start and the audience would get to see some mysterious energy floating into the ship and then you have to wait for the crew to catch up. We were after that. What happens when they know these things all too well.

One of the best bits in “Envoys” is the interaction between the Klingon General and Mariner. Can we expect to see more Klingons moving ahead since every Trek project seems to involve them in some way?
Yes. I don’t think there’s a ton of Klingons in season one. They have a little bit more of a presence in Season Two. Every Trek has its own major villain, and the Klingons were really that for the original series. But the Klingons are not the villains in our show. We do have a villain that will appear this season, but because Klingons have been—especially in Deep Space Nine and TNG, we’ve learned so much about them—they’re really just texture in our world.

I like that, through the first four episodes provided to critics, you introduce both familiar species we’ve seen before and some new ones we haven’t. Moving forward, how much are you inventing for the first time in the Trek universe and how much are you borrowing from what’s already been established?
A lot of the time, it’s kind of 50/50. Methodically, we like to introduce new aliens so our guys can sort of do some contact, which is helpful for the aliens that they’re meeting to have some newness to them, so that we can explore these thoughts. But that being said, it is fun to investigate issues that have not been delved into more than in an episodic fashion. So when we’re talking about what aliens we want to meet, we have every alien that’s been in Trek before, and then we have the aliens from The Original Series.

We really get excited breathing new life into them, because they don’t that often get to be involved in separate shows. And just in the environment of second contact, getting to see what exists in the Trek canon and then being like, “Oh, can we move forward with them a little bit and get a little bit more?” But obviously, wanting to address these issues in order to expand and get an understanding of the quadrant. So we have fun as well. We try to do a balance of it, with the classic and the new initiative.

Episode 2 introduced the holodeck, which TNG fans know well. Can we expect the same sort of escapades where whole episodes take place in the holodeck?
Oh yeah. We’ve got a real game changer. That holodeck, when it malfunctions, it’s bad news. The Cerritos isn’t immune to it. So you can look forward to that in the first season. There’s a bit of a holodeck issue that’s sort of our epic time to do it.

Mariner is obviously the breakout character as our badass lead protagonist. But I also find Rutherford particularly interesting, especially in this episode. We’ve had cybernetically enhanced or augmented Star Trek characters before, but it’s never been used for both comedy and character development. How do you split the difference for Rutherford and will we see more of that human versus tech friction in future episodes?
We will, for sure. And I love Rutherford. He’s so fun to write. He’s such a starkly engineered true believer, and he’s so affable. His view-plan will, it almost has a… I don’t want to say so much about it, but there’s a lot we don’t know about him. The plan, we started to draw slowly, onion-peel layer away the more important things. He’s got lots of things to do. There’s a way that he can kind of keep this portal, that he needs it for engineering. What happens to him goads him on.

You’ve previously confirmed that some legacy Trek actors will pop up in Lower Decks. Narratively, how did you figure out a way to make it make sense for them to be involved in the year 2380?
These characters from previous series, a lot of them are still out there doing stuff. There are stories that are still happening with them. Picard, the new show, takes things far enough away that you’re getting his flare, and some of these previous characters are in their lives, and you can extrapolate from the movies where these separate crews are.

To us, the important thing was: the Cerritos is not an important ship. It is to the people who are working on it and even though it’s the focus of our show, it would feel unnatural to just have a revolving door cavalcade of guest faces showing up. It’s also very distracting. We use huge libraries of actors and characters, have this huge gravitational pull because they just come with hundreds of episodes of familiarity and nostalgia and love. It’s like when you’re on vacation and you run into someone you know and you’re like, “What are you doing in Santorini?” Or something. It adds even more to that feeling on screen.

So we actually were not needing to figure out how to add any of them, but we broke a couple of episodes where naturally we would encounter some familiar faces. They were just a part of our tool of existing Star Trek familiar characters, in the same way that Klingons would be, or Andorians, where it made sense to use them there instead of somebody new, then absolutely.

Noah Hawley’s Star Trek may be on the back burner. Quentin Tarantino’s Trek concept may or may not be in some form of development. Star Trek 4 may or may not be happening. Let’s say you’re crowned Emperor of Paramount tomorrow, what would you like to see for the future of the Trek franchise?
My dream… I mean, let me be Star Trek‘s Emperor. I love these characters and this world. And if somebody suddenly gave me the keys to Star Trek moviedom… I love sci-fi in general, so my kind of dream Star Trek movie would be to do original sci-fi stories. To get different Starfleet crews for each movie and then after a while, as you try to build out what the cinematic Starfleet universe is a little bit, after you’ve lived with these, I don’t know, these different standalone sci-fi mystery, totally interesting movies, then you do like a Star Trek… You see the fleet come together. You get to learn each individual ship. [Ed. note: Now that Viacom and CBS have remerged, the entire Star Trek library is finally under one roof, which makes crossovers more possible.]

And selfishly, it’s because I love sci-fi movies, I love any kind of new, original idea or a new expression of it. I love sitting down and not knowing what I’m in for, and treating sci-fi seriously. But I know that Star Trek has room for lots of different types of common genre of sci-fi. So, letting these movies be a great expression of a different sci-fi ideas and not limiting it to one crew or one ship, and getting to learn every movie about all these different ships’ characters.

And then bringing them together in like an Avengers: Endgame or something. Getting to see your crews interact. It’s kind of extrapolating what they’ve done on television, but just making movie versions of it, with a real specific eye on sci-fi. That’s what would get me really excited. 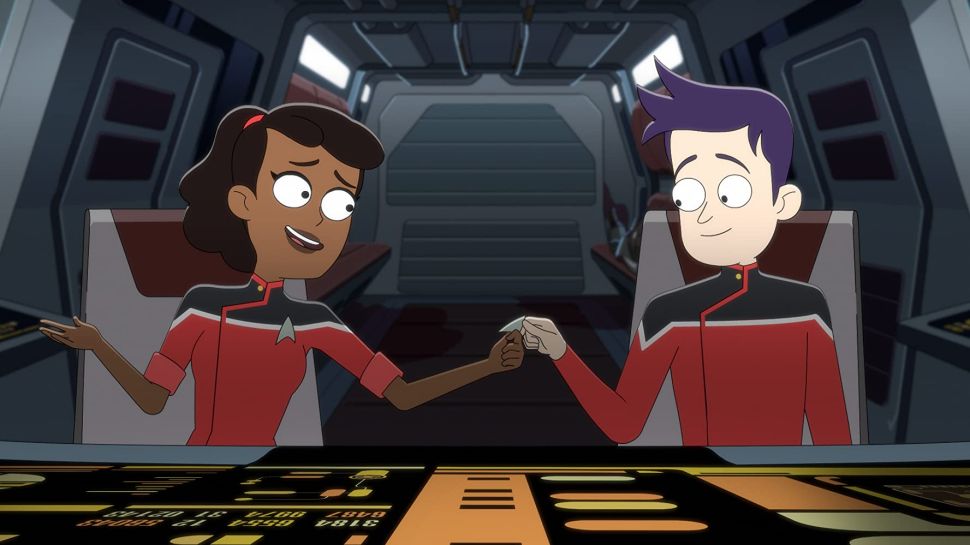