“Don’t ruin great music with trash. Some of us love music without the politics thrown in it,” former U.S. Ambassador to the United Nations Nikki Haley tweeted after the 2018 Grammy awards, in which a number of artists made anti-Trump comments. It’s a fairly common sentiment. Whenever an artist or celebrity like, say, Taylor Swift speaks out on political issues, someone is sure to tell them that they should be quiet and stick to love songs. Art is entertainment and fun and fluff; politics should be left to serious people.

Admittedly, it would have been better if our celebrity-in-chief had stuck to reality television. But, for better or worse, art and politics aren’t separable. In fact, many don’t want artists to speak about politics because artists are often in a unique position to do so. This was illustrated again this week when numerous artists signed an open letter to Tate Enterprises in London in support of striking workers.

Tate Enterprises is the commercial arm of the four Tate art galleries in Britain; it operates retail, catering, and publishing services. Last week, the company wrote an email to staff warning of more than 300 job cuts which management says are necessary to offset dropping visitor numbers during the pandemic.

In May, Tate announced that this year’s Turner Prize was canceled due to COVID-19 and would be replaced by a bursary of £10,000 ($13,000) awarded to ten artists. In response to the strike, those ten artists signed an open letter protesting the job cuts. The signatories, including Arika, Liz Johnson Artur, Jamie Crewe, Ima-Abasi Okon, and Alberta Whittle, said that they were grateful that Tate had decided to make cash disbursements even though COVID-19 prevented the usual exhibition.

“We are moved and grateful for this support,” the ten artists said. But they added, “We are angered and disappointed that the same spirit of support is not being embodied by Tate Enterprises towards their staff.” The letter says that no one at Tate should be fired as long as anyone in management is being paid more than £100,000, and demands that 10% of the £7 million given to the Tate by the government must be used to save jobs.

It would be hard to argue that the artists, in this case, should remain silent, or that they have no standing to speak. They are, after all, recipients of Tate money, just like the Tate Enterprise workers. The difference is that Tate gives workers money for services, while the money given to artists is intended to allow them to go be fabulous creators—and in doing so, to reflect some of that creative glory and fabulousness back on Tate.

This is in fact why artists are often viewed as frivolous or unnecessary. In most jobs, you are paid to do things you wouldn’t otherwise; you have to labor at set days and times and tasks set by managers and ultimately by owners and capitalists. You’re controlled by others, and your work often feels alienating and exploitative.

But artists, in theory and to some extent in practice, are paid to follow their own muse; they are given money to make things they could not be directed to create. Artistic creation is a model of work without alienation, where people are empowered to make things meaningful to themselves, while all those capitalists watch them, awestruck, from below.

Artists are uniquely free—and it’s that freedom that gives them an unusual platform to talk about politics and power. The Tate bursary recipients are associated with Tate, but aren’t really employees. Their work redounds to their reputation and benefit in a way that is not true for most laborers, and that reputation gives them a unique public platform to criticize the institution. Similarly, Taylor Swift can turn the fame she has made from her labor as a musician into instant, national and even international news coverage to express support of USPS, or opposition to Donald Trump.

Artists embody a kind of iconic freedom, which is why so many people want to be artists. But that freedom isn’t that free. Even Taylor Swift doesn’t own the masters of her own music. During the pandemic, clubs, museums, theaters, and other art institutions and venues have all experienced apocalyptic collapse; even fairly successful artists have faced economic ruin. The Tate bursary recipients are grateful because working artists right now are desperately in need of money. COVID-19 has underlined just how much artistic freedom depends on the labor of others—promoters, retail workers, roadies, janitors—as well as on audiences. Artists suffer in downturns like anyone else, and, as the country music act the Chicks can testify, they can also face reprisals for political speech.

Artists are a kind of capitalist amphibian, scooting back and forth between the much of alienation and the sandy beach of liberty. They never exactly shake off the muck, though, nor do they ever lose the air of possibility. Their freedom means they have a unique ability and responsibility to speak about politics, as the Tate artists show. And the fact that that freedom is still stained through with the ugliness of exploitation means that they have a self-interest in doing so. Artists are, among other things, workers who get to speak for themselves. No wonder Nikki Haley would like them to shut up. 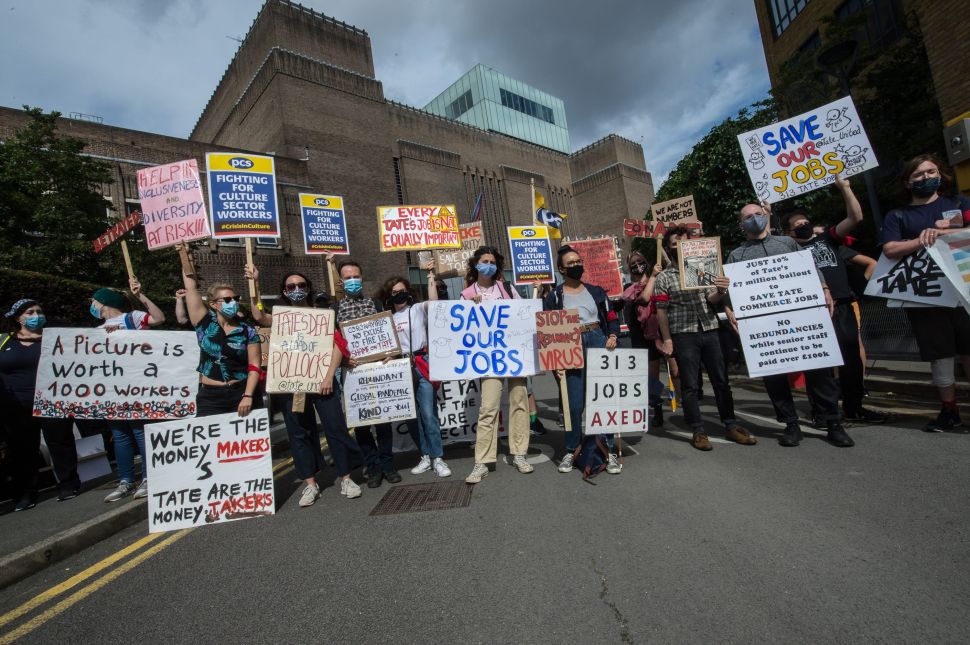