The notifications for a WhatsApp group of Tate galleries staff—who have been striking since August 18 in response to an announcement that 313 jobs would soon be eliminated—began buzzing steadily around 9 p.m. on Friday night. “I’m in,” posted members who had just been emailed that their jobs were secure, inevitably followed by several iterations of “I’m out.” These positions are all being cut from Tate Enterprises Ltd. (TEL), which operates the retail, catering and publishing activities of the English museum, and represent nearly half of TEL’s total staff.

The WhatsApp thread was active for hours as Tate’s human resources department dispatched emails as late as 11:45 p.m. Some employees received no contact, left uncertain about their formal job status for at least the length of the ensuing bank holiday weekend.

Tate was initially supposed to email employees on Thursday, then pushed the deadline by a day. “So everyone was on tenterhooks all of Friday, and I was imagining that someone may contact me at some point even if just to confirm what I already knew,” shared a retail manager employed at Tate for a decade, who prefers to remain anonymous. “I don’t know how many people are in the WhatApp group but it was the saddest stream of people just getting the email.” She still hasn’t received any communication, herself.

“The emails were sent one by one, and they probably thought that people that knew they would keep their job would lose their strike intentions. That they would just decide to go back to work because they had a job,” added another TEL employee, who is also a representative in the Public and Commercial Services (PCS) union. “Actually, it was really the opposite. I think this intensified our intention to fight for our jobs, for our colleagues, because we see that it is a complete injustice.”

These job cuts are a response to the revenue loss from “the long-term drop in visitor numbers we are expecting for the foreseeable future,” according to Tate director Maria Balshaw. The employees striking at the Tate’s four locations have three main demands: that 10 percent of an anticipated £7 million ($9.3 million) in government aid be invested in TEL, that no job cuts are made while senior staffers still earn six-figure salaries, and that the museum join the union in demanding increased government aid if bailout funds aren’t sufficient to meet their needs.

“The government scheme was made to save jobs. But now it’s going to be used to pay for our redundancy notice,” said the PCS representative, explaining that these funds intended to prevent unemployment will now be used as severance pay.

TEL employees also argue that their commercial arm is an integral component of the galleries and a significant income source, one that Tate acknowledges on its gift shop website. “The profits that are made by Tate Commerce are directly covenanted to Tate,” the website implores shoppers. “Your purchase plays a vital part in enabling Tate to continue its ambitious programme and activities.”

The fact that TEL funnels all of its proceeds to the museum, though, has rendered its employees vulnerable. “They say we are retail, we are not part of the gallery,” explains the PCS representative. “No normal retailer would have no reserve, at all. We don’t have any reserve because all of our profit—all—goes back to Tate. All of it.”

Some artists commissioned by TEL to create limited edition items for the Tate gift shop, such as artist and sign painter Archie Proudfoot, are now donating their royalties from Tate products to the PCS fund supporting the strike. Other artists represented in the museum’s galleries and exhibitions have verbally aligned with the strike.

“We’ve received statements of support on our strike action from artists that Tate exhibit in their galleries like Mark Leckey, Jeremy Deller, Hannah Black, Andrew Grassie, Hito Steyerl, Liam Gillick and many more,” shared a Tate Modern retail assistant, who is also a PCS union representative. “We’ve received messages of solidarity from twelve Turner Prize winners, we’ve received endorsements from writers whose books we sell, from politicians like Jeremy Corbyn and from Tate’s members, visitors and other constituents.”

The strike continues at the Tate, in spite of Friday’s wave of emails announcing whose jobs are secure. A protest is planned for Tuesday morning outside the Tate Modern main entrance, with striking employees available to answer questions about their campaign.

“The culture sector, specifically, right now we’re the canary in the mine. Because if we go, it will be much easier for all the other institutions to follow,” warned the Tate PCS representative. “It seems very clear that right now, across these cultural institutions, that the working class is going to pay the price of this pandemic.” 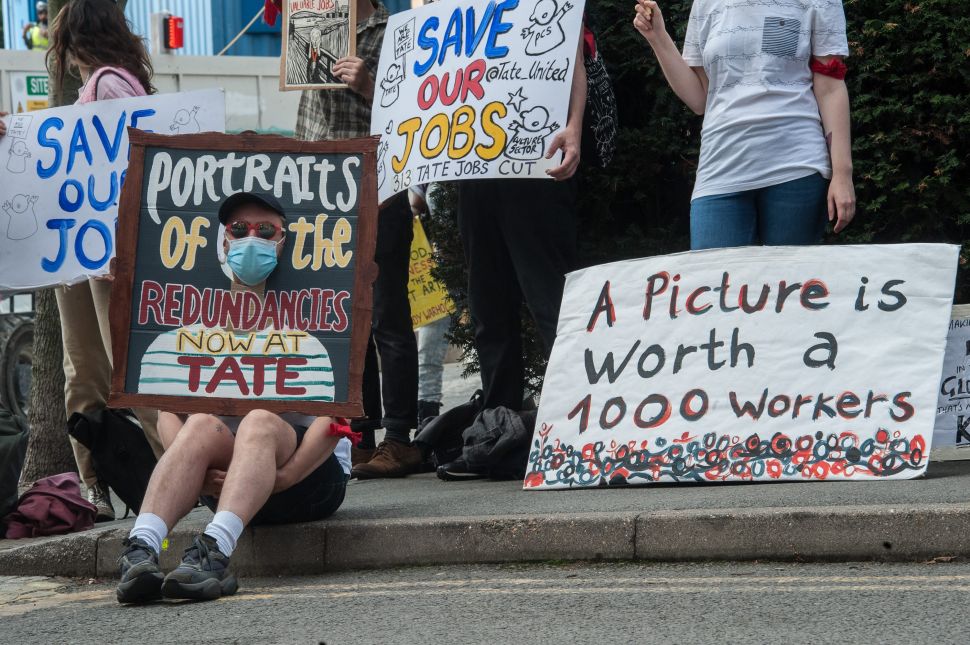